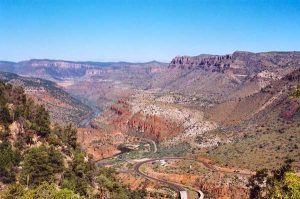 The Battle of Salt River Canyon, Arizona, also called the Battle of Skeleton Cave and the Skeleton Cave Massacre, was the first principal engagement during the 1872 Tonto Basin Campaign under the command of Lieutenant Colonel George Crook. It was part of the Yavapai War from 1871 to 1875.

Here, the Army won its most striking victory in the long history of Apache warfare. At dawn on December 28, 1872, a 130-man force, consisting of about two companies of the 5th Cavalry from Fort McDowell and Old Camp Grant and 30 Apache scouts, under the command of Captain William H. Brown, surprised a band of more than a hundred Yavapai Apache as they tried to emerge from a cave deep in the recesses of Salt River Canyon. The trapped Indians refused to surrender. Some of Brown’s men shot at the roof of the cave and deflected a deadly fire into the defenders. Other soldiers completed the destruction by rolling boulders over the cliffs above. About 75 Indians died, and most of the rest were captured. This victory, along with Crook’s other aggressive measures, so lowered the Yavapai’s morale that on April 6, 1873, they made peace at Camp Verde. 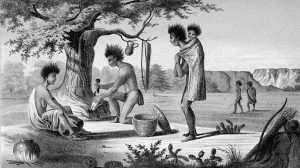 Today, the natural setting is unimpaired. The cave lies on the canyon’s north wall at the angle of a sharp turn to the south. Access is gained by climbing a steep mountainside, crossing a lava bed, and descending from the gorge’s rim by a trail on the face of the cliff. The cave is an elliptical undercut about 65 by 25 feet, situated at the base of a cliff 170 feet high and at the top of a steep slope falling away some 1,200 feet to the water below. The cave’s ceiling is blackened from the smoke of Indian fires and scarred by carbine bullets. The U.S. Bureau of Reclamation has jurisdiction over the site.

Salt River Canyon is in Maricopa County near Horse Mesa Dam. The dam is bounded on the east by Apache Lake and on the southwest by Canyon Lake (Salt River). The site is accessible only with great difficulty and the aid of guides, by boat from Canyon Lake or by unimproved road from the town of Horse Mesa.