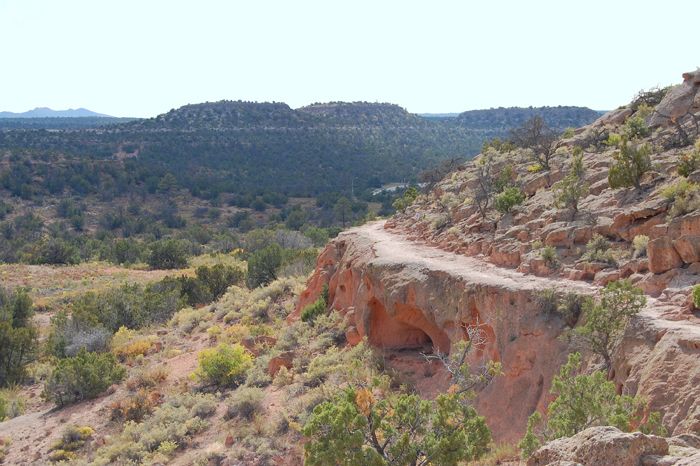 Tsankawi landscape in the upper portion of Bandelier National Monument, by Kathy Weiser-Alexander.

Bandelier National Monument, located near Los Alamos, New Mexico, is a 33,677-acre site that preserves the homes and territory of the Ancestral Puebloans, who occupied this area from the 12th to the 16th centuries. The monument’s sheer canyon walls contain numerous cave dwellings and petroglyphs and pictographs that date from this period. Surface dwellings include the remains of two large villages, Tyuonyi and Tsankawi.

The Ancestral Pueblo people (Anasazi) lived here from approximately 1150 AD to 1550 AD. The upsurge of the population and the main construction activity in Bandelier began after 1300 AD, when large towns grew up and down the Rio Grande drainage, and the people achieved a standard of living.

They built homes from blocks of volcanic tuff, which is soft and relatively easy to break into blocks. There were also sources of hard basalt rock just a short distance down the canyon, from which they made axes and hammers, which could be used as tools to form the tuff blocks. Axes were also used to fell large Ponderosa pine trees whose straight; thick trunks made excellent vigas (the beams used to support the roof).

These Indians depended on agriculture to sustain them in their more sedentary lifestyle. They planted corn, beans, and squash in mesa top fields and supplemented their diet with native plants and meat from deer, rabbit, and squirrel. Domesticated turkeys were used for both their feathers and meat. Yucca plants were also crucial for these people,  who crushed the plant’s roots to make soap and shampoo.

By 1540, when Francisco Vazquez de Coronado and his adventurers arrived from Mexico, the Indian people had already started to leave the canyon for new homes on the Rio Grande. After over 400 years, the land here could no longer support the people, and a severe drought added to what was already becoming difficult times. Oral traditions tell us where the people went and who their descendants are. The people of Cochiti Pueblo, located just south and east along the Rio Grande, are the most direct descendants of the Ancestral Pueblo people who built homes in Frijoles Canyon. Likewise, the people of the San Ildefonso Pueblo are most closely linked to Tsankawi. 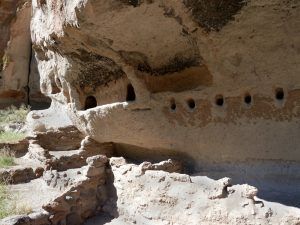 After the Indians moved, the ruins of these old dwellings sat silent for years until a Swiss-American historian and ethnologist, Adolph Bandelier, began exploring and describing the ruins in the 1880s. Around the turn of the century, a bill was introduced in Congress to create a Cliff Cities National Park to protect the site, but it failed to pass. However, further archeological work in Frijoles Canyon from 1909 to 1912 renewed interest, resulting in another proposal of a National Monument in 1915. The proposal passed, and in February 1916, and the monument was named for Adolph Bandelier.

Today, numerous ruined dwellings of one of the most extensive prehistoric Indian populations of the Southwest can be found in the picturesque canyon and mesa country of the Pajarito Plateau. This area, located west of the Rio Grande from Santa Fe, New Mexico, was thickly settled in prehistoric times. In the heart of the plateau, Bandelier National Monument includes and protects several of the largest of these ruins, particularly the unique cave and cliff dwellings in the canyon of the Rito de los Frijoles. 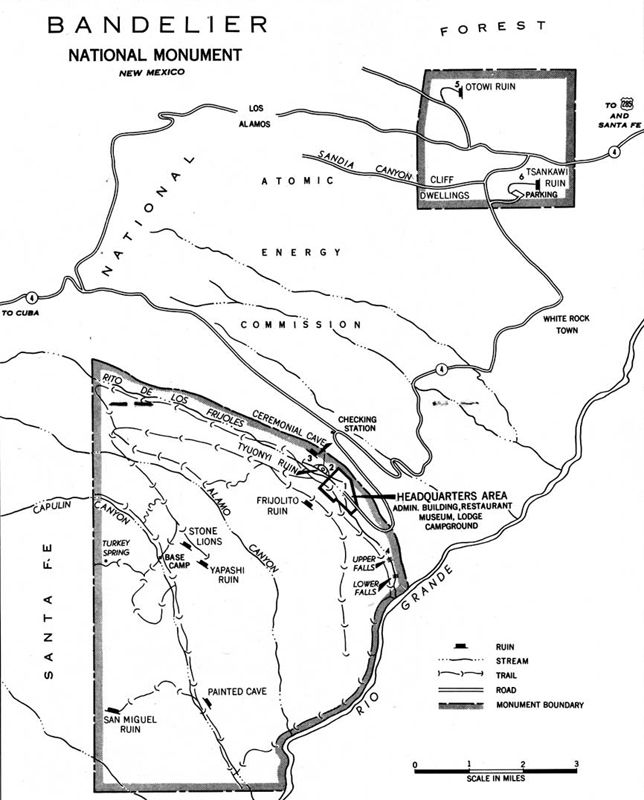 The habitations of the early people were of two types — the cliff or cave-dwelling and the masonry or open pueblo structure. But these two types were frequently blended into composite dwellings, part cave, and part masonry, wherein a cliff formed the back wall of the building. This third type, called a talus house, is conspicuous along the canyon sides within and near the national monument. The most impressive ruins of the Pajarito country are the remains of communal masonry dwellings of pueblo architecture. At least one of these significant buildings contained over 600 rooms.

Visitors can begin their tour of Bandelier National Monument at the distinctive pueblo-revival style Headquarters Building and Visitor’s Center at the terminus of the approach road on the floor of Frijoles Canyon. This building was constructed of hand-hewn stone by the Civilian Conservation Corps in the 1930s and today is part of the Bandelier CCC Historic District and is a National Historic Landmark. An information desk and museum that exhibits Indian artifacts and information on the life and origins of the prehistoric people and the modern Pueblo Indians of the vicinity can be found here. 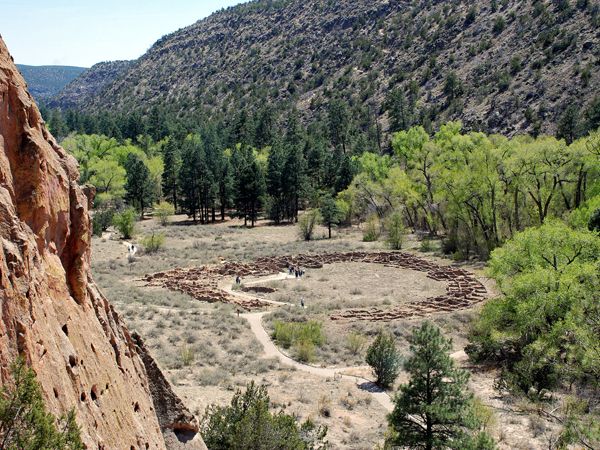 Tyuonyi at Bandelier National Monument by the National Park Service

From here, visitors can hike the 1.2-mile round-trip Main Loop Trail where several archeological sites can be seen. Ladders along the trail allow visitors to climb into cavates (small human-carved alcoves).

One of the sites along the trail is the Big Kiva, an important underground structure that served as a ceremonial and cultural center of the community. When in use, this kiva would have been covered by a roof made of wood and earth. People would have entered the kiva using a ladder through an opening in the roof.

Tyuonyi ((chew-OHN-yee) Ruin lies about 500 yards up the trail. It is only one of several large pueblos located within the Bandelier National Monument. Construction of Tyuonyi began more than 600 years ago, and the caves were occupied simultaneously. The choice to live in the caves or on the canyon bottom may have been based on family, clan custom, or preference. One to two stories high, Tyuonyi contained about 400 rooms and housed approximately 100 people. A central plaza contained three kivas. Access to the village was through a single ground-level opening.

The Long House is adjacent to Tyounyi, built along and supported by the walls of the canyon. A reconstructed Talus House is also found along the Main Loop Trail. 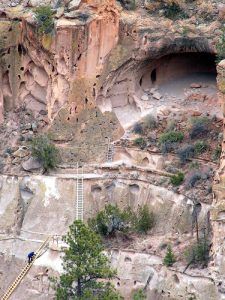 Halfway through the Main Loop Trail, visitors can turn back toward the visitor center or continue another half mile each way (1-mile round trip) to Alcove House. Formerly known as Ceremonial Cave, this alcove is located 140 feet above the floor of Frijoles Canyon. Once home to approximately 25 Ancestral Pueblo people, the elevated site is now reached by four wooden ladders and several stone stairs. In Alcove House, there is a reconstructed kiva and the viga holes and niches of former homes. Imagine climbing these ladders, carrying whatever supplies were needed, to this lofty home.

The Tsankawi Ruins are a separate portion of the monument where Indian trails, petroglyphs, and cave dwellings can be seen along a 1.5-mile trail. It is located on State Highway 4, twelve miles from the main section of the park.

There are over 70 miles of trails within the rest of the park, some of which are short easy loops while others can encompass many miles and steep rocky switchbacks. Along these trails, more ancient homes, caves, waterfalls, and beautiful views can be seen. 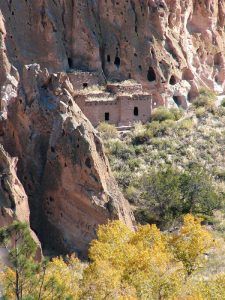