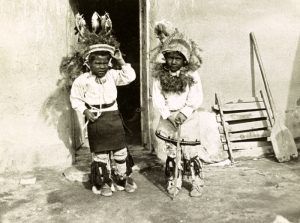 Cochiti Pueblo Boys by the Detroit Photo Co, about 1900

The Cochiti are a Keresan-speaking tribe, and their pueblo is located on the west bank of the Rio Grande, about 35 miles southwest of Santa Fe, New Mexico. It is the northernmost Keresan Pueblo in the state.

Before the earliest Spanish explorations, their ancestors divided into two groups, one branch going southward, where they built the pueblo of Katishtya (later called San Felipe). At the same time, the other took refuge on the Potrero Viejo, a mesa in north-central New Mexico, where they established a temporary pueblo known as Hanut Cochiti, about 12 miles northwest of the present-day Cochiti Pueblo. Later, this group moved again about to six miles southeast of the present Cochiti Pueblo, where they were found by Spanish explorer Juan de Oñate in 1598.

The Cochiti took an active part in the Pueblo Revolt of 1680 but remained in their pueblo for 15 months after the outbreak. When they learned of the return of Governor Otertnin to reconquer New Mexico, they retreated with the Keresan tribes of San Felipe and Santo Domingo (now called Kewa), re-enforced by some Tewa from San Marcos and by Tigua from Taos and Picuris, to the Potrero Viejo.

In the fall of 1692, they were visited by Don Diego de Vargas, the re-conqueror of New Mexico, who induced them to promise to return to their permanent villages on the Rio Grande. But, only San Felipe proved sincere, while the Cochiti remained on the Potrero Viejore until early in the following year, when Vargas, with 70 soldiers, 20 colonists, and 100 warriors from the friendly villagers of San Felipe, Santa Ana, and Zia, assaulted the pueblo at midnight and forced the Cochiti to flee. However, the Cochiti returned, surprised the Spaniards, and liberated most of the Indian captives. Vargas remained a short time, then burned the pueblo and evacuated the Potrero Viejore, taking with him to Santa Fe a large quantity of corn, other supplies, and nearly 200 captive women. 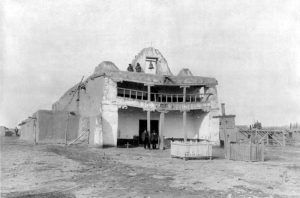 Today, the Pueblo de Cochiti contains 53,779 acres of reservation land and sustains about 1,200 pueblo members. The tribe has jurisdiction over the Kasha-Katuwe Tent Rocks National Monument. The people of Cochiti continue to retain their native language of Keres. They maintain their cultural practices and have instituted programs dedicated to teaching and educating the younger generations in pueblo traditions and cultural practices emphasizing the native language. The Cochiti are well known for their craftsmanship in making jewelry, pottery, and drums.

Visitors are welcome at the 1628 San Buenaventura de Cochiti Mission Church, during certain ceremonies, and at Cochiti Lake. Photos and sketching are prohibited.