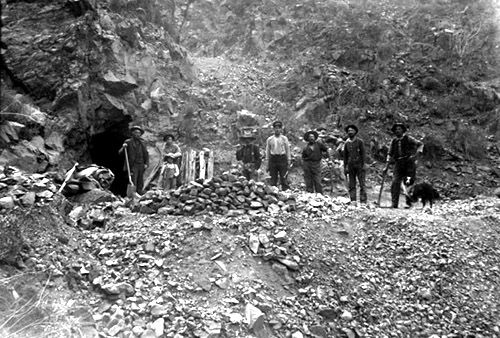 However rich Arizona mines have been, there is a suspicion that, before the days of copper, their net proceeds would hardly equal the amount of money furnished by ignorant investors toward the development of prospects that have never amounted to anything. Still worse, many of these enterprises have been obvious frauds, the money stolen from the unwary after advertising campaigns that claimed enormous riches for the mine that happened to serve as bait. Perpetuated by schemers, these campaigns often found their victims in the eastern states of the Union.

Today such work would hardly be done, for the United States authorities keep a close watch upon any extravagant advertising, and make investigations as to the basis of the claim.

One of the frauds in 1899 grew to such large proportions that Governor N.O. Murphy considered it his duty to issue a formal letter of warning, addressed to outside investors in Arizona mines. This letter brought down a storm of protest, and Murphy was accused of a jealous desire to ruin Arizona mining. Within a few months; however, it was demonstrated that his action had been dictated by a true sense of local patriotism. The particular swindle to which he referred to was the Spenazuma mining project, developed by “Doc” Flowers, who already had made an enormous fortune in the sale of proprietary medicines. The Spenazuma, which was exploited as the greatest mine in the world, was in Graham County and was a very ordinary mine indeed. Ore samples that were sent east and that were piled on the mine dump for the inspection of committees of stockholders were brought from other mines of far greater value in the Black Rock District.

The expose came through a newspaperman, George H. Smalley of Tucson, who furnished Governor Murphy with the information that led to the publicity. However, Flowers still sold stock, at advanced prices, even after his methods had been published in eastern journals. Flowers could not buy Smalley off and soon thereafter had to quit operations in the Southwest.

One amusing feature of Flowers’ operations on the Spenazuma was a fake stage hold-up, thoughtfully provided for the benefit of a number of prospective investors. He hired a number of cowboys to hold up the caravan of coaches, but the defenders succeeded in driving off the bandits. However, later, these “cowboy bandits” couldn’t keep from joyously telling their tale of “banditry.” Flowers was a man of true Wallingford stripe and found an opportunity for making money on every corner. In 1890, while under indictment on a charge of selling fraudulent stock, and while under bond for $50,000, he promoted to Philadelphia investors a company that claimed to have found a method of making gold. He was arrested on several charges of grand larceny, but he succeeded in escaping to Canada. Slow-footed justice, at last, came to him, as late as December 1914. After extradition from Canada, he went on trial in the east and at the age of 70, was sentenced to two years in the penitentiary. If he had stolen a pie his sentence would, probably, have been at least five years.

In 1892, Dr. H. H. Warner of Rochester, New York, an individual famed for his observatory, his bitters and his pills, bought of John Lawler and Judge Ed Avells, the Hillside group of mines in southwestern Yavapai County, paying $50.000 cash on the price of $450 000. The company then sold stock under the name of the Seven Stars Gold Mining Company. Ordinary stock was sold at $1 a share, but beyond this, was also issued a block of 100,000 shares at $5, on which Warner, then believed to be worth millions, personally guaranteed annual dividends at 13%. Warner failed soon afterward and the mine, with much-added development, went back to the sellers, despite the protests of the stockholders. 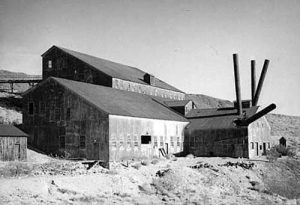 A mining mill in Arizona.

In clearing up the affairs of the George A. Treadwell Milling Company, which had a reduction plant near Humboldt; it was claimed by stockholders that the promoters of the company on stock sales aggregating about $1,000,000 had cleared up a “profit” of $500,000, while not more than $100,000 had been spent on the property. One of the promoters, a New York lawyer, was said to have been paid counsel ‘s fees of $36,000.

One Eastern firm of brokers secured bonds or options on a number of Yavapai County mines, of the “has-been” class, of former leaders in the silver production of Arizona. These old mine workings were cleaned out to an extent, and some of the cleverest of advertising, mainly beautifully printed circulars and letters, were sent to potential investors.

Though describing plans of reduction works that would make rich the miners of the entire country, little was done after the stock-selling campaigns. With a stock seller, it mattered little whether his mine had any worth or not. He never did more mining than was necessary to make a showing for his campaign. This condition was not peculiar to Arizona. Such schemes were worked much more generally, and with even greater success to the promoters, during the days of mining activity in Alaska and Nevada.

One individual who had a mine near Prescott issued a unique prospectus full of quotations from the Bible and of glittering generalities concerning the wealth that was to be secured in the marvelous mine exploited, which later seems to have dropped from the public eye. Within the prospectus appeared the following:

Come, little brother, and sit on my knee,
And both of us wealthy will grow, you see;
If you will invest your dollars with me,
I will show you where money grows on the tree.