Settled in the late 1870s, Fairbank, Arizona was first called Junction City when it began as a simple stagecoach stop on the way to Tombstone. Later it was called Kendall, before finally becoming an “official” town in May 1883 and called Fairbank. 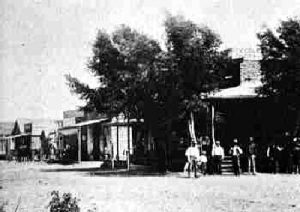 Nestled up against the San Pedro River, the area was initially part of an old Mexican land grant called the San Juan de las Boquillas y Nogales. It couldn’t quite be called a town until the construction of the railroad began in 1881. When the railroad was completed in 1882, it quickly became an important depot for the shipment of both cattle and the all-important ore coming from Tombstone.

That same year, the town was renamed Fairbank for Chicago investor, Nathaniel K. Fairbank, who not only helped to finance the railroad but also was one of the main organizers of the Central Mining Company in Tombstone. When a “wye” for turning locomotives was installed in the town, even more railroad traffic came through as trains headed southwestward to Nogales, Arizona and Sonora, Mexico. 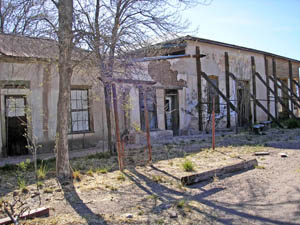 The Adobe Commercial Building once held a post office, a saloon, and a general store. Kathy Alexander, April 2007. 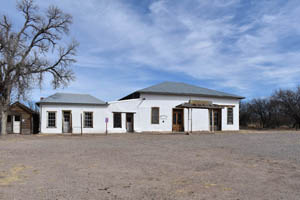 The old commercial building in Fairbank, Arizona has been restored by the Bureau of Land Management. Photo by Kathy Weiser-Alexander.

By this time, the town had a store, a saloon, and several houses, with most of its residents working at the nearby Central Mining Company or the railroad.

On May 16, 1883, the post office was established in what is now known as the Adobe Commercial Building, which also housed a general store, and a saloon. 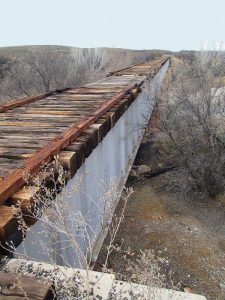 Fairbank’s importance as a railroad town grew and it soon boasted three different railroad lines and depots, becoming the central point of entry and exit for miners, prospectors, materials, and ore, primarily headed to and from Tombstone, which wasn’t connected to the railway until 1903. The stage, during this time, continued to do a brisk business to connect travelers those last ten miles to Tombstone.

Before long, the community supported a Wells Fargo office, five saloons, four stores, three restaurants, a school, a jail, and a mill. New residents could buy lots for $50 to $150 each. For those just passing through, the Montezuma Hotel was constructed in 1889, just south of the Adobe Commercial Building.

In September 1890, the San Pedro River went on a rampage, flooding over its banks and resulting in narrow escapes from death and much property damage.  However, the town rebuilt and continued to survive.

Like many other mining towns, Fairbank also had its share of lawlessness. One such incident was a train robbery that involved one of Arizona’s most respectable lawmen, Jeff Davis Milton. In 1900, Milton was working for Wells Fargo as an Express Messenger on the Southern Pacific run from Benson Arizona to Guaymas, Mexico. Many of the cargos often were comprised of gold and silver bullion and part of Milton’s job was to guard the laden rail cars.

In February 1900, lawmen-turned- outlaws, Burt Alvord, and Billy Stiles, along with three other bandits attempted to rob the express car while it stopped for water in Fairbank. In the inevitable shoot-out that ensued, Milton killed one of the bandits, wounded another, and stopped the gold from being stolen.

During the gunfight, Milton’s left upper arm was shattered by a bullet, but the arm was saved and he lived to later work as a range detective.

After the mining played out, Fairbank, like most of the other towns in the area began to die. In 1901, the Boquillas Land and Cattle Company, which included the heirs of the original land grant, re-entered the area, exerting their legally binding rights to the land. They evicted all homesteaders but allowed a small number of town residents to stay and continued to lease the Adobe Commercial Building.

Even though, Fairbank continued to be the center of social life in the area through the 1940s. In 1920, a new Fairbank School was built, replacing the original wooden one that had burnt down. Classes continued to be held until 1944. 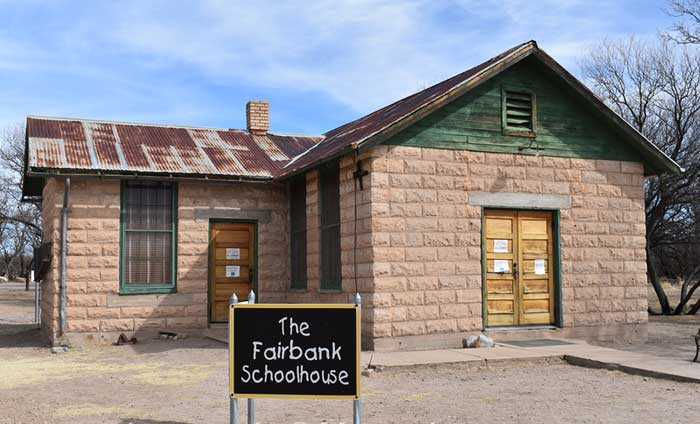 The post office finally closed in the 1970s, but still, the General Store remained opened for a number of years.

In 1987, the Bureau of Land Management acquired the land that was once the Mexican Land Grant and the area became part of the San Pedro Riparian National Conservation Area (NCA,) designated as such in November 1988.  The word “riparian” refers to an area where plants and animals thrive because of the availability of water and the NCA’s primary purpose is to protect and enhance the desert riparian ecosystem.

The remaining buildings of Fairbank have been stabilized and restored by the Bureau of Land Management. 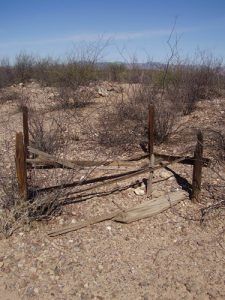 The Montezuma Hotel, which stood just south of the Adobe Commercial Building, was torn down when Highway 82 was built. Today, all that’s left of the old hotel are portions of the old foundation.

However, there are still a number of buildings to been seen, including the old schoolhouse, which has been restored and now serves as a museum, a couple of old homes, a stable, and outhouses.

A short 1/2 mile hike will take the visitor to Fairbank’s old cemetery atop a hill north of town. Continuing on the trail, another mile or so, can be seen the ruins of the Grand Central Mill.

Fairbank is located ten miles west of Tombstone on AZ 82, just east of the San Pedro River on the north side of the road. 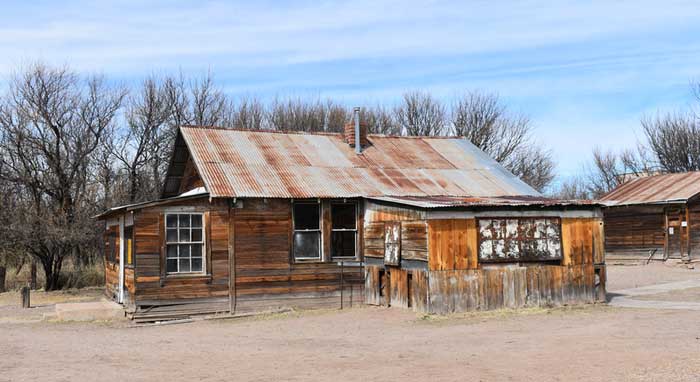