The Alvord-Stiles Gang operated in Arizona Territory and was led by two ex-lawmen, Burton Alvord and Billy Stiles.

The gang was established by Burton Alvord after he was hired as a deputy sheriff in Wilcox, Arizona. Up until that time, Alvord had served as an honest lawman, but along the way, he began to drink heavily and spent a lot of time in saloons, where he befriended a number of outlaws. In January 1899, he became a deputy sheriff in Willcox, Arizona Territory, a town that desperately in need of law and order. He often deputized his friends including Matt Burts, Bill Downing, and Billy Stiles.

He and Billy Stiles then formed a gang, which also included Bravo Juan Yoas, brothers, George and Louis Owens; “Three Fingered Jack” Dunlap, and Bob Brown. They started with cattle rustling and then began to commit armed robberies. 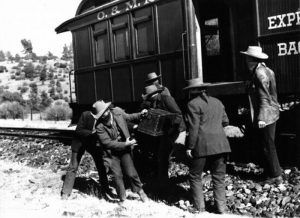 On September 9, 1899, Alvord-Stiles Gang robbed a train in Cochise, Arizona, making off with several thousand dollars in gold coins and bills. They were unsuccessfully pursued by a posse under Sheriff Scott White and George Scarborough.

The gang then committed several armed robberies in Cochise County, but Alvord and Stiles were apprehended after attempting to rob the Southern Pacific Railroad. A short time later, however, they were able to escape.

On February 15, 1900, they attempted to rob a Fairbank train and had a run-in with tough lawman Jeff Milton, who killed “Three Fingers Jack” and wounded Juan Yoas. A short time later, Alvord was captured and taken to the Cochise County Jail in Tombstone, Arizona.

On April 7, 1900, Billy Stiles went to visit Alvord, then held a gun on deputy marshal for George Bravin demanding the release of all of the prisoners. When Bravin didn’t immediately comply, Stiles shot the lawman in the foot, taking off two of his toes. Twenty-five prisoners, including Alvord, then escaped. 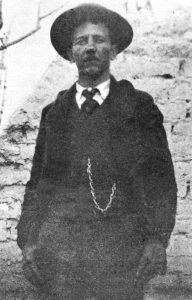 Arizona Rangers finally tracked both men down in Mexico in February 1904. When the outlaws resisted, Alvord was hit twice and surrendered, but Stiles, despite a bullet in the arm, managed to escape. Alvord then spent two years in the Yuma Arizona Territorial Prison. Following his release, he announced he was going by ship to start anew in Central America. He was last seen in 1910 working as a canal employee.

In the meantime, Stiles made his way to the Orient for several years before he returned to the United States and made his way to Nevada. There, he became a deputy sheriff in Humboldt County, under the name William Larkin. On December 5, 1908, he was killed when trying to arrest a man.