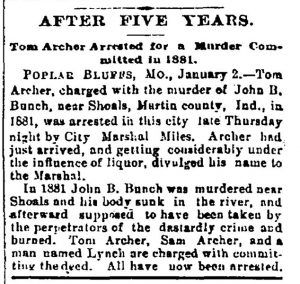 The Archer Gang were a group of notorious desperadoes that terrorized parts of Indiana during the mid 19th century.

Much like the Reno Brothers had operated two decades earlier, the Archer brothers — Thomas, Mort, John, and Sam, raided Orange and Marion Counties in Indiana for several decades. Though these four were the primary members, the gang was estimated to have some 16 members, almost all of which were blood kin.

Though to the outside community, they were seen as respectable farmers and whetstone makers and millers, when their funds ran low they turned “bandit.” They regularly robbed stagecoaches, trains, and road travelers as well as rustling horses and cattle. During these years, strangers, peddlers, and even regular citizens went missing, never to be seen again and no trace of their bodies was ever found.

Sometimes, they branched outside of Indiana plying their outlaw ways in Illinois and Kentucky. In addition to their thievery, they were also said to have been involved in arson, extortion, counterfeiting, burglary, and murder.

In-fighting within the family proved to be their downfall and when one of the wives spilled the beans about a local man who had been murdered, three of the brothers — Tom, Mort, and John — were hauled in and jailed at the town of Shoals. However, before they could be tried, vigilantes took them from the courthouse and lynched them from trees in March 1886. A fourth brother was later captured, tried and legally hanged just blocks away, four months after the lynchings. That finished the gang.