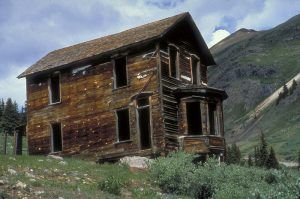 Sitting at an elevation of 11,200 feet, the first log cabin was built here in 1873 by prospectors. As more miners worked in the area, a mining camp was born that was originally called Three Forks of the Animas River. When it gained a post office in February 1875, the name was shortened to Animas Forks. Because of the high altitude, most of the town residents migrated to Silverton in the winter.

By 1876 the mining camp had become a bustling mining community, boasting 30 cabins, a hotel, a general store, an unlicensed saloon, and a post office. That year the Dakota and San Juan Mining Company built a large mill in town. Though the mill was never very productive or profitable, it gave the impression of success and encouraged outside investment in the area. 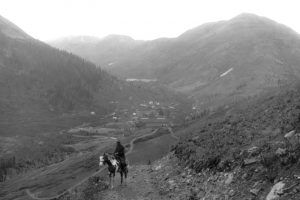 As the camp became a regional center for commerce and mail, and a formal townsite was laid out in 1877. The same year, the first legal saloon opened, and Otto Mears constructed a toll road linking Ouray, Animas Forks, and Lake City. Before long, daily stagecoaches were running between Animas Forks and Lake City.

In 1878, Edwin Brown, Levi Woodbury, and Harrison Garrison built a dam on the Animas River and established a water-powered sawmill near town. By August, it was churning out 4,000 board feet of lumber per day. In 1879 William Duncan built a two-story wood-frame house that still stands, and the Brown brothers, Edwin and Squire, established the Kalamazoo House, the grandest hotel in town, which boasted a piano and the only telephone in Animas Forks. By this point, more people were staying in town through the winter, and some shops were remaining open year-round. The hearty few who stayed were subject to avalanches and isolation. 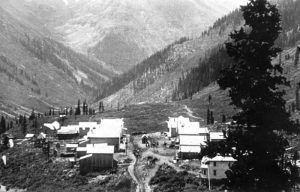 In 1880, Animas Forks had a population of 114, and the town was incorporated the next year, becoming the second municipality in San Juan County. Animas Forks reportedly grew as large as 450 over the next few years, and many new businesses were established. Three more stores were opened, as well as two butcher shops, two boarding houses, the Mercer House hotel, the Flagstaff House restaurant and bakery, a drug store, two assay shops, and a blacksmith shop.

One of the boarding houses was run by Esther Ekkard, who was the camp’s first woman, having arrived in 1875. The boarding house was extremely popular with the miners because Ekkard extended them credit. When one freeloader slipped out of town without settling his account for three months of lodging, a vigilante committee set out after him. After catching up with the man in Silverton, the man paid up after the vigilantes threatened to lynch him. Afterward, Mrs. Ekkard had no problems with customers skipping out on their bills.

The town built a jail in 1882, and the same year, it gained a newspaper called the Animas Forks Pioneer and established a school district. Classes were held for a few years in rented buildings. During these prosperous years, the town boasted itself as the “largest city in the world,” bud added in small type, “at this altitude.” However, despite its promising beginnings, Animas Forks began to decline in the mid-1880s, as speculative mining activity in the area slowed to a halt. 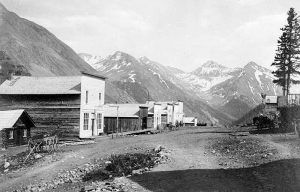 In 1884 a terrible blizzard inundated the town with 25 feet of snow, forcing the residents to dig tunnels to get from building to building. The residents were snowbound for 23 days and were unable to obtain supplies.

The same year, work on the Mineral Point (or Bonanza) Tunnel stopped, and the blacksmith left. The butcher shop closed in 1885, and the newspaper shut down in 1886. The post office temporarily closed in February 1889 but reopened again in October after the Sunnyside Extension mine started to ship ore.

In October 1891, the town suffered a devastating fire that started in the Kalamazoo House kitchen, destroyed the hotel, and eventually burned 14 buildings, causing $20,000 in damage. Afterward, the post office closed again, and most of the people moved away.

However, a few gold mines, including the Sunnyside Extension, continued to operate throughout the 1890s, but the town of Animas Forks was nearly deserted. 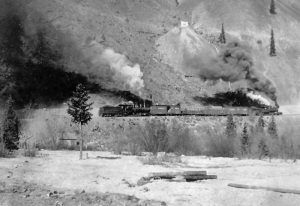 The town got a second chance in 1903. That year, the Gold Prince Mine Company bought the Sunnyside Extension claims near Animas Forks and planned to build a large mill in the area. That same year, Franklin Rockefeller and N.R. Bagley invested in the Bonanza Tunnel, work began again, and the two men began to acquire 140 mineral claims in the area.

In 1904 the Silverton Northern Railroad extended its tracks from Eureka to Animas Forks, drastically reducing transportation costs and making the mining of lower-grade ores economically feasible. An aerial tram was also installed to transport ore from the Gold Prince Mine. The town’s post office reopened in July, and T. J. McKelvey, who served as the postmaster and railroad depot agent, opened a merchandise store. 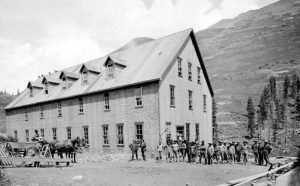 The Gold Prince Mill, Animas Forks, Colorado by the San Juan Studio, about 1910

In 1905, several men arrived to build the Gold Prince Mill, and workers repaired some of the town’s old buildings and built new houses. Four saloons were in operation by August. When the Gold Prince Mill was complete, it included 100 stamps and had a 500 ton per day capacity. It was the most expensive and largest mill in the state. Ore was brought to the mill from the Gold Prince mine in buckets on a 12,600-foot long aerial tramway.

The same year, Franklin Rockefeller and N.R. Bagley, who had bought the Bonanza Tunnel formed the Frisco Mines and Tunnel Company. The tunnel was renamed the Bagley Tunnel, and its first ores were processed at the Gold Prince Mill. With both companies operating, the population of Animas Forks again reached several hundred. Eventually, the town came to have electricity, telephones, and a telegraph.

The Gold Prince Mill operated steadily for about two years, but its owners filed for bankruptcy in 1907, though the mill continued to operate intermittently for several years. At about the same time, the crews of the Silverton Northern Railroad graded a branch line up to the Frisco camp near the tunnel. The Gold Prince Mill closed in 1910. By that time, Animas Forks was called home to 90 people. Many of them stayed as they continued to work on the Bagley Tunnel. 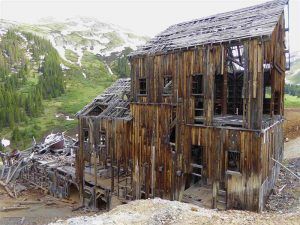 By 1911, the Bagley Tunnel reached 7500 feet in length, cutting through a dozen notable veins of importance. In 1912, the Frisco Mill was built near the tunnel. This mill was entirely prefabricated by the San Juan Lumber company in Durango. Support beams were erected, numbered, dismantled, and reassembled on Animas Forks site. The huge building was transported by the Silverton Northern Railroad and then loaded into wagons and hauled to the site for assembly.

The Frisco Mill was a 150-ton reduction mill that utilized the latest of equipment. When it was up a fully functioning, the mining complex included many buildings in addition to the large reduction mill. These included a compressor building, a large tool shed, blacksmith shed, a mine manager’s house, a large boarding house, and several outbuildings. Electric power was often established in these remote mining areas before it was available to the general public. It was completely electrically powered and had telephone service. The Frisco camp kept up to 32 miners employed plus 8 to 10 mill men. Production records from 1913 and 1914 show 7,166 tons of ore produced from the various veins serviced by the tunnel.

In September 1913, the Animas Forks suffered another devastating fire, which destroyed several buildings, including a few saloons and a boardinghouse. 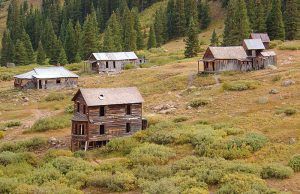 The Frisco Mill closed in 1914, and once again, most of the population left. The post office closed for the final time in November 1915. The last major activity in town was the dismantling of the Gold Prince Mill in 1917 when most of the mill’s major parts were removed to the SSunnysideMill in Eureka. This was probably the last time the railroad was used.

Afterward, some of the area mines were worked periodically, and the buildings of the town were sometimes occupied by miners. Among the best mines in the area were the Gold Prince, Columbus, Red Cloud, Silver Coin, Early Bird, Little Roy, and the Big Giant.

The Silverton Northern Animas Forks branch tracks were torn up in 1936, and the Columbus mine was last worked in 1939.

The Animas Forks townsite was listed on the National Register of Historic Places in 2011. Today, Animas Forks is one of the highest mining camps in the nation. The site is managed by the Bureau of Land Management, and the remaining buildings have been stabilized and restored. Nine buildings remain standing, including the two-story Duncan House, the Columbus Mill, and the jail structure, which is the oldest building on the site. Foundations and other falling buildings dot the area. Interpretive signs tell the history of the town. 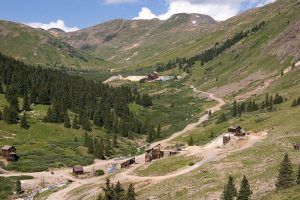 Today Animas Forks is one of the most popular destinations along a popular Alpine Loop Backcountry Byway. The skeletal remains of the Frisco-Bagley Mill and Tunnel are located a half-mile west of Animas Forks along Co Rd 9 in California Gulch. The site includes the partially collapsed 150-ton reduction mill, cement foundations that once anchored compressors, and the Bagley Tunnel opening, which is approximately 200 feet away from the mill. The portal to the tunnel is now blocked off, and stream flows out of it.

A half a mile west of the Frisco-Bagley Mill, Co Rd 9 turns south and three miles later comes to the Sound Democrat Mine complex. Along the way are the falling remains of several other mines, including the Gold Prince, Mastodon, and Hanson. From the Sound Democrat Mill, Co Rd 9 continues for 3.2 to Co Rd 2, which heads north back to Animas Forks or south to Silverton. See Side Spur – County Road 9.

Animas Forks can be reached from Silverton by traveling northeast along County Road 2 for just over 12 miles. Along the way can be seen the remains of the mining camps of Howardsville, Middleton, and Eureka. This unimproved road is passable in summer by two-wheel drive vehicles. However, the roads beyond Animas Forks require a four-wheel drive, high-clearance vehicle.

From Ouray, Animas Forks is located 13.5 miles to the southeast. Take US 550 south for 4.3 miles to Co Rd 18 and turn left (east). At this point, the road requires a four-wheel drive, high-clearance vehicle and can be a difficult road to drive. Some portions are rated for “expert 4×4 drivers only.” From US 550, Co Rd 18 makes its way for 4.3 miles, at which point the road becomes Co Rd 17. Continue for 2.7 miles to Co Rd 2. Turn right (south) for two miles to Animas Forks. 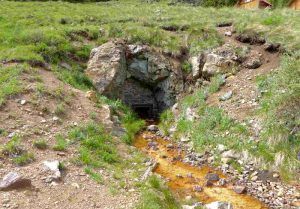