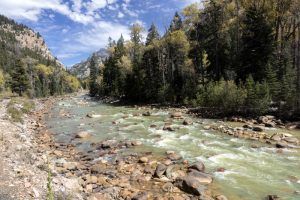 The ghost town of Eureka, Colorado is situated along the Animas River in San Juan County between Silverton and Animas Forks. Its longevity was primarily due to the nearby Sunnyside Mine.

The area was first explored for minerals when Captain Charles Baker lead a group of miners to the San Juan Mountains in 1860. Making their camp at Baker’s Park, which is the present-day site of Silverton, they roamed the area and found placer gold in the Animas River. However, at this time, this region was the territory of the Ute Indian Tribe and the miners were forced to leave.

That changed after the Utes ceded their lands to the U.S. Government in the Brunot Treaty of 1873. That same year, prospectors returned to the area, some of whom were with the original Baker party more than a decade before.

As the men worked the hills above Eureka, several new claims were established, the largest of which became the Sunnyside Mine near the shores of Lake Emma. The Sunnyside claim, on the north side of the Animas River at the head of Eureka Gulch, was made by Reuben J. McNutt and George Howard. The pair also organized the Eureka Mining District so their claims would be officially recognized. 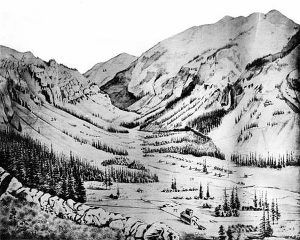 Reuben McNutt built the first log cabin at Eureka and before long other prospectors joined him forming a mining camp. It took its name for the Greek phrase “I have found it!” Because of the camp’s strategic location, local speculators predicted the camp would evolve into a formal settlement and organized the Eureka Townsite Company and platted a townsite. The town was built in the middle of two mountainsides to lessen the avalanche danger. But, the founders did little to promote the town or secure businesses and residents, as they, like the rest of the camp’s residents, were busy prospecting.

Reuben McNutt soon paid George Howard for his share of the Sunnyside property and in 1874, McNutt began to develop the mine. On the other side of Hanson Peak, prospectors staked additional segments of the vein, one of which was the Sunnyside Extension.

A post office was established at Eureka in 1875. The next year, Milton and Emma Thompson Engleman arrived from Canon City and opened a mercantile store. Milton bought a half interest in the Sunnyside Mine from Ruben McNutt, and Emma purchased interests in the nearby George Washington and Poughkeepsie No.2 Mines. The lake near the Sunnyside Mine was named for Emma Engleman. Eureka was one of a few towns in this high altitude area to stay open through the winter. 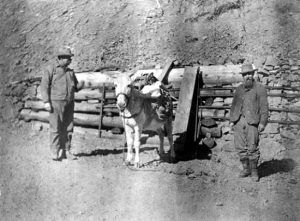 The Miltons had little money left to develop their claims but hired several miners who began sending down ore from shallow workings. In the late 1870s, Milton wanted to develop the mines and offered interests in the property to his in-laws, Frank and Louis Thompson of Canon City, for capital. This proved to be a bad idea, as they quarreled over profits, control, and ownership, which poisoned the relationships between Milton and Emma and the Thompson family. As a result, when Milton Engleman received news that the miners had struck rich gold ore in the Sunnyside Mine, he stockpiled it instead of selling it. 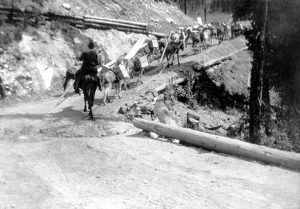 Pack trains of mules hauled the ore down from the Sunnyside Mine to Eureka and returned with supplies.

In 1883, Engleman hired John H. Terry, fresh from the mines and mills of Gilpin County, to manage his mining operations and build a mill at the Sunnyside Mine. After the ten-stamp mill at Lake Emma was complete, the Engleman’s primarily used their profits to fund their legal squabbles.

After several years, Terry was unsatisfied with the small capacity, inefficiency, and remote location of the stamp mill at Lake Emma and petitioned Milton Engleman to fund a new facility. Construction began on a new mill in 1889 about one mile west of Eureka. A small hydro-power plant was installed at the mill for electricity. The Midway Mill was completed in 1890, which allowed production to increase at the mine and in that decade several tunnels were driven into the mountainside to reach the ore.

Terry also wanted to install a tramway, but he waited until capital reserves were replenished. In the meantime, a herd of pack animals brought the ore down the mountain to the mill. About a year later, Milton Engleman died and the family was willing to sell. Terry bought the mine and mill and immediately began to make improvements. The silver crash of 1893 slowed Terry’s progress. 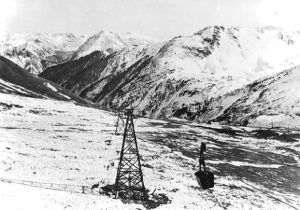 However, in 1895, Terry located a rich vein, paid off all his debts and began buying out other investors for sole ownership. By 1896, Terry felt financially secure enough to construct a tramway, replacing the costly mule trains to the Midway Mill. At about the same time, a group of New York investors took an interest in the Sunnyside and made Terry an offer to buy the mine for $450,000, with payments made over a period of time and a $100,000 advance as earnest money. Terry accepted the offer and the investors immediately began to build a new mill at Eureka, overhauled the Midway Mill, and made other improvements. Soon afterward, however, the miners lost the vein and afraid to risk further loss, allowed the property to revert to Terry. 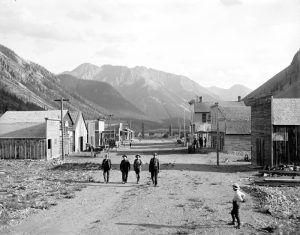 In the meantime, Otto Mears and other Colorado capitalists incorporated the Silverton Northern Railroad and began building a line from Silverton north up the Animas River. In the fall of 1895, the company utilized Otto Mears Animas Forks Toll Road as the rail bed and began construction. Workers labored in between snowstorms through the winter and finished the line to Eureka in June 1896. The railroad connected to the Denver & Rio Grande Railroad at Silverton, greatly reducing the cost of transportation. The railroad also offered passenger service, which allowed the miners and mill workers to live in Silverton.

Between 1896 and 1897, Terry’s miners struck the rich vein and produced so much ore that Terry had to run both the Midway Mill and the old facility on Lake Emma. With the $100,000 advance he had received from the New York investors, he resumed construction on what became known as the Eureka or Terry Mill, its tramway, and a power plant. At the mine, infrastructure was also built on the shore of Lake Emma that included boarding houses, shops, and mine buildings. 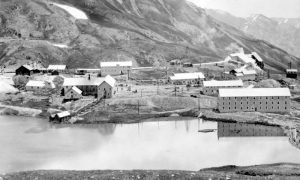 Sunnyside Mine and Lake Emma, Colorado

The new Eureka Mill started operations in 1899. In 1904 the Silverton Northern Railroad extended its line to Animas Forks. By this time, John Terry had groomed his two sons in the mining operations. Joseph focused on managing the mine and William the mills. When John Terry died in 1910, his sons continued on.

In 1911, William Terry enlarged and refitted the Eureka Mill with a zinc ore separator which increased its operations. Joseph was managing a workforce of 90 employees producing 180 tons of ore per day, double the usual average per worker.

In 1917, the American Smelting and Refining Company (ASARCo) made a generous offer to the Terrys for the Sunnyside Mine. ASARCo also bought out the other area mines to ensure long-term reserves. Forming the Sunnyside Mining & Milling Company, the Sunnyside, Washington, and Gold Prince groups were consolidated. The company made plans for yet another mill at Eureka capable of treating 500 tons per day and to finish driving the Terry Tunnel from the mill site to undercut the vein system at great depth.