Along for the expedition, at the behest of General Custer, were two professional miners. During the summer expedition, gold was discovered, and accompanying journalists quickly sent word back east. The rumors of gold in the Black Hills which had been circulating for over 50 years had now been confirmed, and a new gold rush was on.

By late 1875, information had become public that high ranking officials in Washington were involved in a scandal that involved the selling of exclusive trading rights at forts and posts along the upper Missouri River region.

The licenses needed to trade at military forts were issued by the Secretary of War, William Belknap. In March and April of 1876, Custer testified before a congressional committee that Secretary Belknap was involved in the graft. In addition, Custer’s testimony attached President Ulysses S. Grant’s own brother Orville to the corruption. This put Custer in a precarious situation with the Commander and Chief, who was presently overseeing the final planning stages of an offensive on the Lakota and Cheyenne Indians for the upcoming spring.

Custer was eventually allowed to command his 7th Cavalry for the upcoming campaign. In the spring of 1876, the U.S. Army dispatched three massive columns comprising multiple regiments of Cavalry, Infantry, and Artillery. Their objective was to clear the area of Lakota and Cheyenne Indians and force them onto the Great Sioux Reservation. Custer’s regiment was part of the largest column coming from Fort Abraham Lincoln, North Dakota. General Alfred Terry commanded the campaign, and Custer was Terry’s subordinate. On June 22, 1876, under orders from Terry, Custer’s 7th Cavalry was sent ahead of the rest of the column in hopes that they could be the striking force for what was most assuredly a large collection of Lakota warriors not far ahead of them. 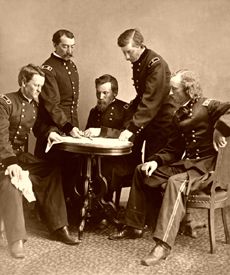 The original plan for defeating the Lakota called for the three forces under the command of General George Crook, John Gibbon, and Custer to trap the bulk of the Lakota and Cheyenne population between them and deal them a crushing defeat. Custer, however, advanced much more quickly than he had been ordered to do and neared what he thought was a large Indian village on the morning of June 25, 1876. Custer’s rapid advance had put him far ahead of Gibbon’s slower-moving infantry brigades, and unbeknownst to him, General Crook’s forces had been turned back by Crazy Horse and his band at Rosebud Creek.

Based on intelligence suggesting that the Lakota and Cheyenne were about to flee, Custer ordered his 7th Cavalry to attack. By the end of the day, 263 soldiers and approximately 80 Lakota and Cheyenne lay dead. Custer was among them. Less than two weeks later on July 4th, Philadelphia was bursting at the seams with pride and nationalism. On the 100th birthday of the United States, people had come from all over the world to share in the theme of “100 Years of Progress.” On that day, they would receive word that their famous Civil War hero had been killed at the Battle of the Little Bighorn in Montana Territory. Americans were confounded in shock and stricken with grief.

Americans were devastated, but, none more than the wife of the fallen General, Libbie. She lived on another 57 years after her beloved husband’s death. For the rest of her days, she tirelessly lobbied public opinion; portraying her husband as a brave, gallant, and noble figure struck down before his time. In spite of his early death, Custer’s name would continue to live on in dime novels, art, music, and film. Thanks in large part to Libbie, her husband achieved in death the infamy he sought in life.

Battle of the Little Bighorn

* Legends Of America Reader Steve Busch wrote an article in October of 2012 we think is also worth sharing.  Read about the varying accounts of General Custer’s death, the possible love affair and child with a Cheyenne woman and more in History Revisited – Digging for the Truth.

There are not enough Indians in the world to defeat the Seventh Cavalry.