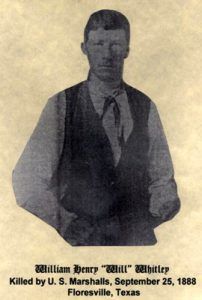 William Henry Whitley was the co-leader of an outlaw gang in Texas sometimes referred to as the Bill Whitley Gang, and at other times, the Brack Cornett Gang,

Born on September 7, 1864, in Itawamba County, Mississippi, the youngest child of William Taylor Whitley and Elizabeth Henry Whitley. His older brothers served as Confederate soldiers in the Civil War, and William grew up in the wild and violent lawlessness that swirled throughout the south when the war was over. When his older brother was killed by a lawman in 1884, “Bill” launched his career of violence, during which he would allegedly kill eight men. Though history tells us that some of Whitley’s descendants say that his exploits were greatly exaggerated and that he was a good man, most legends claim that he participated in eight bank robberies and one train robbery.

Somewhere along the line, he married a woman named Lucinda “Cord” Cox Whitley of Lampasas, Texas. His marriage to Lucinda soon began to create problems for her relatives, when some were arrested for harboring a criminal and others charged with being his confederates. The couple had two children, Minnie Margaret Whitley, born in November 1884, and Temperance Alice Whitley, born in March 1886. The “heat” was getting so bad that Whitley fled to England for a time, leaving his wife and children in the care of her brother, who moved them to Coryell County, Texas. When he returned, he took up with Brack Cornett and a gang of outlaws who began to rob trains and banks actively.

In September 1888, the Bill Whitley Gang planned to rob a Southern Pacific train out of Harwood, Texas. However, their plans were foisted when U.S. Marshal John Rankin somehow found out about the scheme. On the day of the planned robbery, Rankin, along with Deputy U.S. Marshal Duval West, and several Texas Rangers hid on board the train. Just three miles outside of Harwood, the gang predictably stopped the train but were effectively driven off by the lawmen. Though followed, the would-be robbers were able to escape. Pursued more than ever by numerous posses, the gang was finally run to ground by U.S. Deputy Marshals just a few days later, on September 25, 1888, in Floresville, Texas. When the law caught up with them, the inevitable gunfight occurred, in which Bill Whitley was killed, and another gang member was taken prisoner. Bill Whitley was just 24 years old. Brack Cornett was able to escape and fled to Arizona. However, one Texas Ranger, Alfred Allee, doggedly pursued Cornett to Frio, Arizona, where he caught up with him. Gunplay erupted once again, and when the smoke cleared, Cornett was dead.