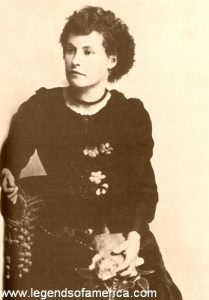 Better known as “Squirrel Tooth Alice,” Mary Elizabeth “Libby” Haley Thompson was a popular “soiled dove” in the frontier cow towns of the American West, despite the gap in her teeth that earned her nickname.

She was born in 1855 in Belton, Texas, to James and Mary Raybourne Haley. Growing up was difficult for Mary Elizabeth, as the family lost nearly everything during the Civil War. Towards the end of the conflict, things got worse for Libby when Comanche Indians raided the family farm in 1864, and she was kidnapped. She remained with the Comanche for three years until 1867, when her parents paid a ransom for her release.

Mary Elizabeth was seen as a “marked woman” after her release through no fault of her own. Though she was only 13 years old, most people assumed that she had been “used” by the Indians during her captivity and she was shunned and ostracized from society.

Just a short time later, she met an older man who cared little about her past. Though the girl may have been happy with her suitor, her father was not and soon shot and killed the man.

Afterward, the 14-year-old ran away from home and traveled to Abilene, Kansas. With few options to support herself, she became a dance hall girl and prostitute. In this role, she earned the nickname “Squirrel Tooth Alice” for two reasons – one the prominent gap in her teeth, and the second, an odd penchant for making pets of prairie dogs, which she kept on a collar and leash. While in Abilene, she met gambler and gunman William “Texas Billy” Thompson, brother to more famous Ben Thompson. 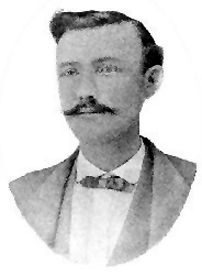 Before long, the pair became a couple, and Libby followed Billy as he worked as a cowboy along the Chisholm Trail, and she continued to make money as a dance hall girl in several places along the trail.

However, by 1872, they were back in Kansas, this time in Ellsworth, where Billy made his living gambling and Libby continued working the saloons. The following year, Libby gave birth to her first child, and the two got married.

In August of 1873, Billy Thompson shot and killed Ellsworth town Sheriff Chauncey Whitney in a state of drunkenness. Billy was arrested but soon bailed out, and the couple fled back to Texas. However, Texas Rangers caught up with Billy in October 1876, and he was extradited to Kansas to stand trial for the killing of Sheriff Whitney. Amazingly, the shooting was ruled an accident, and Billy was let go. Later, they wound up in Dodge City, where Libby worked once again as a dancer and prostitute.

After leaving Dodge City, the Thompsons drifted to Colorado briefly but soon returned to Texas. In Sweetwater, they finally settled down, purchasing a ranch outside of town, and Libby set up a dancehall and brothel in town.

Over the years, Libby had nine children, three of which were said to have been fathered by someone other than Billy. In the meantime, her Sweetwater brothel became prosperous.

In 1897, Billy died of stomach ailment, but Libby continued to run her Sweetwater brothel until she finally retired in 1921 at the age of sixty-six. Most of her sons had turned to a life of crime, and her daughters followed her into prostitution. Sometime later, she moved to Palmdale, California.

She lived a long life before finally dying at the age of 98 on April 13, 1953, at the Sunbeam Rest Home in Los Angeles, California.