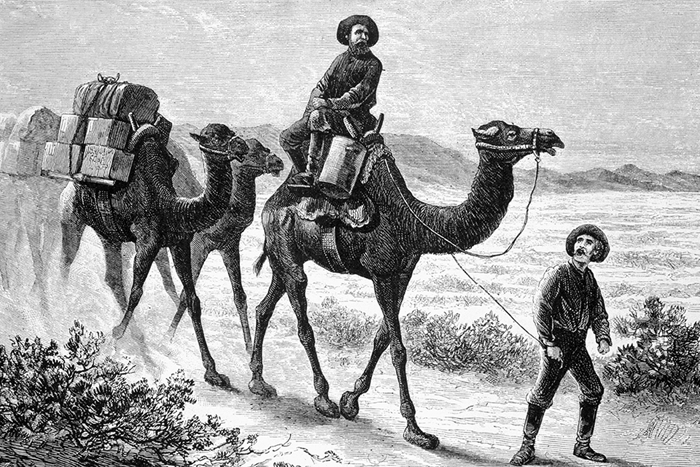 Camels in the Southwest.

In 1848, the importation of camels for military purposes in the southwest was suggested to the War Department by Henry Wayne, a Quartermaster Major. Two years later, Secretary of War and Mississippi Senator Jefferson Davis, tried to persuade the Senate to look into the use of camels for the U.S. Army.

During this time period, the southwest territory of the United States was greatly expanding, and it was thought that camels could be used to carry at least twice the amount of weight as horses or mules, and might also be used in tracking and pursuing Indians, as they could travel without water or rest for much longer than horses. It was also suggested that the camels might carry the mail and that fast camel passenger trains might be developed to run from Missouri River points to the Pacific Coast.

Initially, the Senators voted the idea down, but after California newspapers began to promote the idea, they finally agreed in 1854, passing a bill to appropriate $30,000 for the camel experiment. 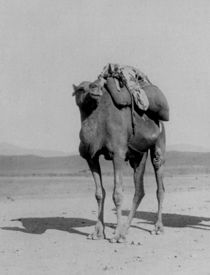 Some 72 camels arrived in the country in the early part of 1857 and were put to work carrying supplies in the southwest. However, though the camels proved to be well-suited to travel through the region, their unpleasant disposition, a habit of frightening horses, and tendency to wander off during the nights made them very unpopular among the soldiers. Still, they continued to be used until the Civil War broke out, at which time; they were sold at auction or turned loose into the desert.

For years afterward, wild camels continued to be spied roaming in the desert, especially in Arizona. Along with these real sightings, a number of legends and tales began regarding these ugly beasts of burden. The most popular is the tale of a camel known as the Red Ghost.

In 1883, a woman was found trampled to death and, on her body and a nearby bush, were clumps of reddish fur. Large hoof prints were found in the area, but locals were perplexed. A short time later, a large animal careened into a tent in which two miners lay sleeping. Though they were unable to identify the beast, again, large hoof prints and tufts of red hair were left behind. After more incidents occurred, the locals finally recognized the large animal as a camel. Soon, people began to report seeing the camel, which one rancher said carried a rider, though the rider appeared to be dead. The next report came from a group of prospectors who saw the camel and, while watching him, spied something falling from its back. As the beast moved on, the prospectors went to see what had fallen and discovered a human skull. For the next several years, numerous others spied the camel, who by this time had been dubbed the “Red Ghost,” carrying its headless rider. However, in 1893, when an Arizona farmer found the red camel grazing in his garden, he shot and killed the beast. By this time, the large camel had shaken free of its dead rider but still bore the saddle and leather straps with which the corpse had been attached. 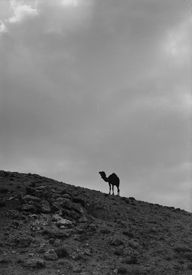 There was much speculation as to who the mysterious dead rider the camel had carried for several years might have been. One tale alleges that the rider was a young soldier who was afraid of the camels, and therefore, was having much difficulty in learning how to ride them. In order to teach him how, his fellow soldiers tied him to the top of the beast, determined that he would get over his fear. They then hit the camel on the rump, and the beast took off running. Though the soldiers pursued the camel and his rider, the red beast easily outpaced them and escaped into the desert. Neither the camel nor his helpless rider was ever seen again.

Though the abandoned beasts of the Camel Corps roamed for decades, they soon disappeared altogether. In 1907, a prospector reported that he had seen two wild camels in Nevada, and other reports continued to come in sporadically. However, in April 1934, the Oakland Tribune reported: “The Last American Camel Is Dead.” The camel, dubbed “Topsy,” was last seen trekking across the desert of Arizona into California. When she made her way to Los Angeles, she was taken to Griffith Park to live. However, sometime later, she became so crippled with the paralysis, the zoo attendants were forced to put her down.

Seemingly, all the “real” army camels have long passed. However, legends continue to abound of people sighting a giant red camel carrying a headless rider in the deserts of Arizona. It sounds as if “Red Ghost” may very well be living up to his name.

Yet another legend of a ghostly camel also persists. This camel belonged to a prospector named Jake, who had purchased three camels from the Army at the public auction. Though his camels were every bit as ornery as the soldiers had described them, he spent much time caring for them and had nothing but praise for his beasts of burden. 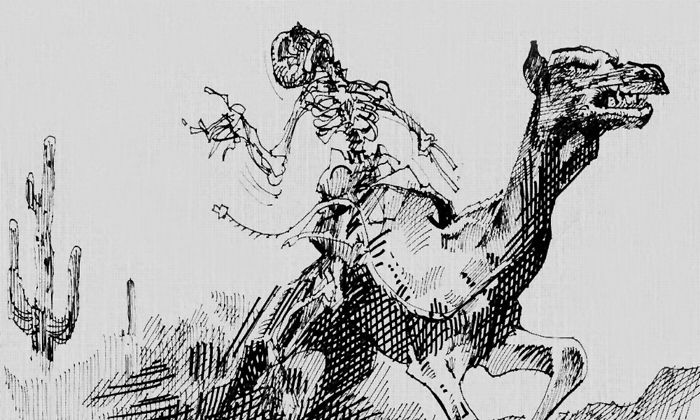 After Jake hit pay dirt, he led his gold-laden camels into town to sell his ore. Afterward, he headed to the local saloon to celebrate. Unfortunately, in the crowd was a man named Paul Adams, who listened with much interest to Jake’s story of his gold find. When Jake left to return to his mine, he didn’t go directly to his claim, knowing that he might be followed. Though he was careful and took a circuitous route, the man named Paul Adams followed him. When Jake encamped for the night, Adams, thinking that he was at the mine’s location, murdered him. Trying to protect his owner, one of the camels attacked Adams, and for his efforts, was shot by a scoundrel, but not before he had viciously bit him.

Adams then began to search in earnest for Jake’s mine until one night, the ghost of Jake riding upon the dead camel approached his camp and chased the scoundrel all the way into town, straight to the sheriff’s office. Frightened beyond belief, Paul Adams then made a full confession.

Whether Jake and his loyal camel continue to roam the desert is unknown.