Back to the Frontier Menu 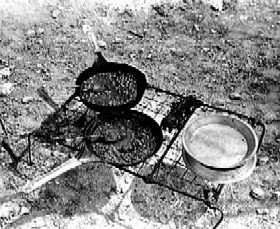 Cut buffalo in bite-size pieces. Salt and pepper. Cover all with brown gravy. Cook over kerosene fire about four weeks at 465 degrees. This will serve 3800 people. If more are expected, two rabbits may be added. But do this only in an emergency. Most people do not like hare in their stew.

Beaver meat is similar to muskrat. The flesh is dark, tender and soft. This animal has scent glands that are found between the front forelegs, under the thighs, and along the spine in the small of the back. They should be removed immediately after the skin has been removed, taking great care not to cut into them. Beaver fat has a strong flavor and odor, and should be cut away completely before cooking. Beaver meat was often soaked in salted water prior to cooking to draw out some of the strong flavor. Another method was to cover it with boiling water to which 1 teaspoon of baking soda has been added. Then drain and cook in the usual way.

Take care to remove every speck of fat on the surface of the flesh. Soak the meat in a vinegar bath overnight. 1/4 cup of vinegar with enough water to cover the meat. Wash the meat in cold clear water. Place in a roaster and cut several slits into the lean meat. Sprinkle with salt and pepper, and put 4 stips of salt pork over the slits, and dust with a little flour. Put 1/4 cup water in the pan and roast with the lid on until half done. Add more water if needed to keep pan from going dry. Cut into small pieces, onion, celery, and carrots to fill a cup and sprinkle over the meat. Finish roasting with the lid off. The meat should be falling off the bones. Add water and flour to the juices to make a gravy.

Simmer the first five ingredients together until meat falls from bones. Grind and chop meat fine. Neck bones (chicken, turkey or lamb) may be substituted if hogs head is not available.

Strain liquid from meat. Boil down to reduce amount or add water to increase to 4 cups. To boiling liquid add 1 cup corn meal, adding more if necessary in order to make mush thick. Add 1 teaspoon salt. Boil over heat 3-5 minutes. Add ground meat and place over boiling water for 10-15 minutes. At this time additional seasoning may be added if necessary.

From the guts of a young calf:

Cube the top five meats. Add them to a hot Dutch oven that has a small amount of lard melted in the bottom. Brown the meats. Slice the marrow gut and add it to the pot. The brains are cooked in a separate pan and a few tablespoons of flour are added to thicken them. They are then added to the pot. Add a diced onion, salt and pepper. Cover in water and allow to cook for 304 hours (yes, we really mean 304 – not a misprint.) Continue to stir and do not allow it to stick.

Soak the slabs of pork in water overnight, or boil and pour off the water. Dredge in flour and fry in a greased skillet until golden brown.  Instead of flour, you can dip it in a thick batter of cornmeal, flour and water.

Back to the Frontier Menu