Cowboys and pioneers spent much slow-moving time on the range and the many trails westward. Numerous songs and ballads were made up and sung along the way to pass the time. The author is unknown for most of these historic lyrics, and many versions often existed.

What keeps the herd from running,
Stampeding far and wide?
The cowboy’s long, low whistle,
And singing by their side.

Another fun video from our friends at Arizona Ghost Riders

Bury Me Not on the Lone Prairie

The Camp Fire Has Gone Out

A Cow Camp on the Range

The Cowboy at Work

The Days of Forty-Nine

Down in the Valley

The Gal I Left Behind Me

Here’s To the Ranger

Home On the Range

The Road to Cook’s Peak

I killed a man in Dallas,
And another in Cheyenne
But when I killed the man in Tombstone
I overplayed my hand.

I rode all night for Tucson
To rob the Robles Mine
And I left old Arizona
With a posse right behind. 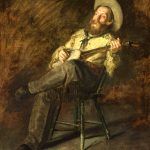 I rode across the border
And there, it did not fail
The men that was a-follerin’ me
They soon did lose my trail;

They galloped back to Tucson
To get the Cavalry
While I stayed on in Mexico
Enjoying liberty;

Ayi-ha, enjoyed my liberty
I promised my Rosita
A pretty dress of blue
She said, “You’d go and get it.” 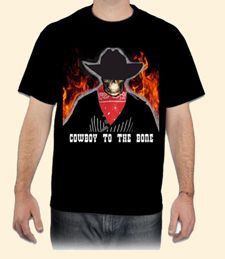 Available at Legends’ General Store in multiple colors and sizes.

So I went back to the border
Just to get that gal a dress
I killed a man in Guaymas
And two in Nogales;

But the posse was a-waitin’
To get me on the trail
Now in Tombstone, I’m a layin’
In the Cochise County jail;

Ridin’ the range once more, totin’ my old forty-four,
Where you sleep out every night and the only law is right,
Back in the saddle again.