Ridin’ the range once more, totin’ my old forty-four,
Where you sleep out every night and the only law is right,
Back in the saddle again.

Billy was a bad man
And carried a big gun,
He was always after Greasers
And kept ’em on the run.

He shot one every morning,
For to make his morning meal.
And let a white man sass him,
He was shore to feel his steel.

He kept folks in hot water,
And he stole from many a stage;
And when he was full of liquor
He was always in a rage.

But one day he met a man
Who was a whole lot badder.
And now he’s dead,
And we ain’t none the sadder. 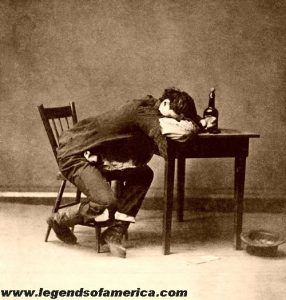 Perhaps this man had been on a “bender” when this photo was taken in 1874. Click for prints & products.

I’m a howler from the prairies of the West.
If you want to die with terror, look at me.
I’m chain-lightning — if I ain’t, may I be blessed.
I’m the snorter of the boundless prairie.

He’s a killer and a hater!
He’s the great annihilator!
He’s a terror of the boundless prairie.

I’m the snoozer from the upper trail!
I’m the reveler in murder and in gore!
I can bust more Pullman coaches on the rail
Than anyone who’s worked the job before.

He’s a snorter and a snoozer.
He’s the great trunk line abuser.
He’s the man who puts the sleeper on the rail.

I’m the double-jawed hyena from the East.
I’m the blazing, bloody blizzard of the States.
I’m the celebrated slugger; I’m the Beast.
I can snatch a man bald-headed while he waits.

He’s a double-jawed hyena!
He’s the villain of the scena!
He can snatch a man bald-headed while he waits. 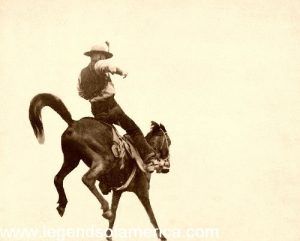 A Bronc Buster. Click for prints, downloads and products.

My love is a rider, wild bronchos he breaks,
Though he’s promised to quit it, just for my sake.
He ties up one foot, the saddle puts on,
With a swing and a jump he is mounted and gone.

The first time I met him, ’twas early one spring,
Riding a broncho, a high-headed thing.
He tipped me a wink as he gaily did go;
For he wished me to look at his bucking broncho.

The next time I saw him ’twas late in the fall,
Swinging the girls at Tomlinson’s ball.
He laughed and he talked as we danced to and fro,
Promised never to ride on another broncho.

He made me some presents, among them a ring;
The return that I made him was a far better thing;
‘Twas a young maiden’s heart, I’d have you all know;
He’s won it by riding his bucking broncho.

My love has a gun, and that gun he can use,
But he’s quit his gun fighting as well as his booze;
And he’s sold him his saddle, his spurs, and his rope,
And there’s no more cow punching, and that’s what I hope.

Now all you young maidens, where’er you reside,
Beware of the cowboy who swings the raw-hide;
He’ll court you and pet you and leave you and go
In the spring up the trail on his bucking broncho. 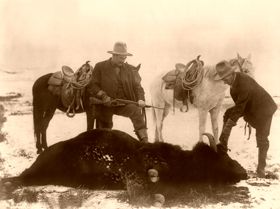 Come all you pretty girls, to you these lines I’ll write,
We are going to the range in which we take delight;
We are going on the range as we poor hunters do,
And the tender-footed fellows can stay at home with you.

It’s all of the day long as we go tramping round
In search of the buffalo that we may shoot him down;
Our guns upon our shoulders, our belts of forty rounds,
We send them up Salt River to some happy hunting grounds.

Our game, it is the antelope, the buffalo, wolf, and deer,
Who roam the wide prairies without a single fear;
We rob him of his robe and think it is no harm,
To buy us food and clothing to keep our bodies warm.

The buffalo, he is the noblest of the band,
He sometimes rejects in throwing up his hand.
His shaggy main thrown forward, his head raised to the sky,
He seems to say, “We’re coming, boys; so hunter, mind your eye.”

Our fires are made of mesquite roots, our beds are on the ground;
Our houses made of buffalo hides, we make them tall and round;
Our furniture is the camp kettle, the coffee pot, and pan,
Our chuck it is both bread and meat, mingled well with sand.

Our neighbors are the Cheyennes, the ‘Rapahoes, and Sioux,
Their mode of navigation is a buffalo-hide canoe.
And when they come upon you they take you unaware,
And such a peculiar way they have of raising hunter’s hair. 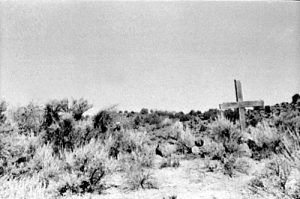 Grave on the prairie

Bury Me Not on the Lone Prairie

O bury me not on the lone prairie
These words came low and mournfully
From the pallid lips of the youth who lay
On his dying be at the close of day.

It makes no difference, so I’ve been told
Where the body lies when life grows cold
But grant, I pray, one wish to me
O bury me not on the lone prairie.

I’ve often wished to be laid when I die
By the little church on the green hillside
By my father’s grave, there let mine be
O bury me not on the lone prairie.

The cowboys gathered all around the bed
To hear the last word that their comrade said
O partners all, take a warning from me
Never leave your homes for the lone prairie. 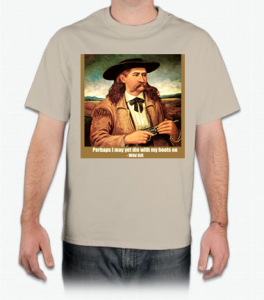 Available at Legends’ General Store in mutiple colors and sizes.

Don’t listen to the enticing words
Of the men who own droves and herds
For if you do, you’ll rue the day
That you left your homes for the lone prairie.

O bury me not, but his voice failed there
But we paid no head to his dying prayer
In a narrow grave, just six by three
We buried him there on the lone prairie.

And the cowboys now as they cross the plains
Have marked the spot where his bones are lain
Fling a handful of roses on his grave
And pray to the Lord that his soul is saved.

In a narrow grave, just six by three
We buried him there on the lone prairie.