By Colonel Theodore Ayrault Dodge in 1891 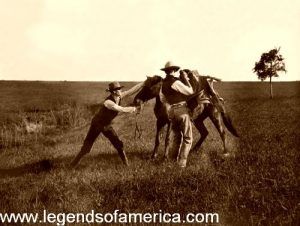 The cowboy is in the saddle more than any man on the Plains. He rides what is well known as the cowboy’s saddle, or Brazos tree. It is adapted from the old Spanish saddle — is, in fact, almost similar — and differs sensibly from the Mexican. The line of its seat from cantle to horn, viewed sidewise, is a semicircle; there is no fiat place to sit on. This shape gives the cowboy, seen from the side, all but as perpendicular a seat in the saddle as the old knight in armor. There are, of course, other saddles in use. The Texas saddle has a much flatter seat than the Brazos tree; the Cheyenne saddle a still flatter one, with a high cantle and a different cut of pommel arch and bearing; and some individuals may ride any peculiar saddle. But all must have the horn and high cantle. In no other tree would the cowboy be at home or fit for service.

The cowboy is careful of his ponies, not only from a horseman’s motives but because he is held to account for them. Unlike the Indian, he rarely has a sore-backed nag. He often uses a gunny-bag saddle-cloth next the pony’s skin — the hempen fiber of which keeps the back cool — and over this, for padding, his woolen blanket.

In the Southwest he is apt to sport a variegated saddle-cloth with fringed edges, such as the Mexicans parade; and if he can manage to get hold of a Navajo blanket, he is fixed. These wonderful bits of handwork, of bright pleasing colors, are worth from $50 upward, never seem to wear out, and are by long odds the best thing under a saddle which exists. The Indian will give from two ponies upward for one of them, when he can buy a wife for one pony, and not a very good pony (or wife) at that. The cowboy’s saddle is held in place by one very wide or two narrower hair cinchas, though the single cincha is more a Californian habit. If one, it is on the Plains always put a full hand-breadth back of what in the East we call the girth-place. The rear girth gets a purchase on the back slope of the ribs. 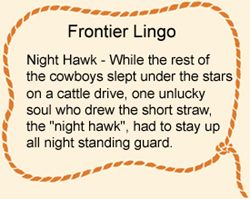 The cowboy’s bit is any kind of a curb with a long gag. He rides under all conditions with a loose rein, the bit ends of which are of chain, which clanks a rhythmic jingle to his easy lope. His pony is as surefooted as a mountain goat, and will safely scramble with his big load up a cliff, or slide down a bank which would make our tenderfoot hair stand on end. The loose rein and the sharp gag enable the cowboy with the least jerk to pull his pony back on his haunches, for the pony is unused to a steady hold. The cowboy is not a three-legged rider. The bit hangs in a fancy trade bridle, which the cowboy ornaments in various fashions to suit his own ideas of style. The effect of its use on the pony is precisely the reverse of that which is made by a bit on a horse supplied by school methods or even bitted, and which has been ridden on a light touch. The latter brings down his head to the hand, with an arched neck, easy mouth, and a give-and-take feel of the hand. The pony at the least intimation of the bit, long before the rein is taut, jerks up his head, and must have a tough mouth or an exceptional fright to make him take hold of you.

The most striking part of the cowboy’s rig is the chaperajos, or huge leather overalls, he is apt to wear. These originated in the mesquite or chaparral country, where the cattle business had its on-gill, and where jeans or a pair of the best cords will be torn to shreds in a day.

When the chaperajos are seen out of this region, they have been retained from force of habit. This singular garment is made of cowhide, weighs five or six pounds, and used invariably to have the edge cut into a long fringe, but this ornamentation has begun to disappear. It boasts no seat, which could with difficulty be made to fit. On the left leg of the chaperajos is a pocket for cigarettes or chewing tobacco, matches, and small sundries. The chaperajos could not comfortably be worn in any other saddle than one which gave a short, upright, “forked-radish” seat.

They are too much like trousers made of stove-pipe.

At the cowboy’s saddle-bow usually hangs a rawhide or hair or Mexican grass rope, from forty feet long upward, to use for every purpose, from roping cattle to hauling out a mired team; and his rifle, a seventy-three Winchester, rests crosswise at the horn, in a broad pouch-like strap, which protects the lock from injury, or is slung under the left leg, where it can lie with equal security. He boasts few riches. What he has is apt to be in dollars, or occasionally a few steers. He buys a pair of eighteen-dollar boots, a pair of $15 gloves, and the rest of his rig and dress is scarcely worth a five-dollar bill.

Broncos with manners are like angels’ visits. The cowboy’s bronco is never what we should call half broken. By the time he has been ridden enough to be well broken in, lie is usually all broken up. He is a difficult fellow to mount, being ridden but once every four or five days. If he were not so small, one could never mount him without assistance. He will back away, plunge forward, swerve, kick, strike, squeal, rush full at you with mouth wide open, or perform a hundred other antics which would compel us simple-minded park riders to hurry him off to the nearest auction-room. He is, in fact, what we are wont to characterize as a “dangerous brute.”

But the cowboy can always see him and go him one better. He approaches him at the left shoulder and gathers the rein in his left hand. Not infrequently he puts his hand over the pony’s eye while he grabs the left stirrup and gets his foot in it, following up the broncos antics as best he may.

Then, grabbing the pommel with the right hand and the pony’s withers with the left, and if possible getting his left elbow in the hollow of the neck just forward of the withers, nothing which the pony can do can keep him out of the saddle. In fact, a plunge that drags him from his feet will all the more certainly swing him to his seat. Then, after a series of bucks, more or less severe, during which his spurs go time and again into the pony’s flanks, the mastery is established where it properly belongs, and harmony, such as it is, reigns till the next time of mounting. 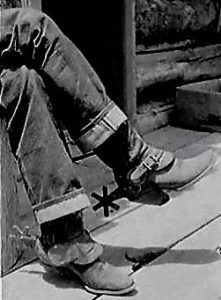 The cowboy universally rides a lope, as do all people who use wild horses. The bronco has no other gait, in fact, unless a sort of fox-trot. The cowboy’s seat is unsuited to an open trot. He wont ride it if he can help it; and, it may as well be confessed, he cannot — and no one can – sit close without pounding to the long rangy trot of a big thorough-bred, though it is the perfection of gaits if you rise to it. We hear from many that the cowboy can do everything. Rumors run that some of Buffalo Bill’s cowboys rode English horses in their own saddles, and beat everything to hounds in the midland counties. Those who know that country and its riders accept this statement cum grano [with a grain of salt.] But assume its truth. One often sees a dare-devil of an English lad just out of college who imagines, because he has once or twice led the field on one of the squire a crack hunters, that he is the best rider in it. But, in truth, he is risking his horses, not to count his own neck, at every obstacle he clears, and pumping the last ounce out of his generous beast, while wiser and older riders close behind him are saving their horses, and bringing them in fresh and able. It is not riding a fabulous distance, or at the greatest speed, or with the most conspicuous daring, which is the test, but getting in at the death with the least exertion to man and beast. The highest proof of artistic horsemanship is to accomplish your task with the least expenditure of physical force. To keep the horse in good condition is among civilized people a greater test than the speed or daring of the rider. So in the great tests of distance made by Plains ponies and civilized horses one element is apt to be forgotten. The latter must be brought in without injury; the pony may be killed by the feat. No question whatever that if the pony and the thorough-bred, under even conditions, be ridden until both fall in their tracks, the pony will be beaten in speed and distance.

But the cowboy is unequaled in his own province, and this is enough of fame. His seat is astonishing. It is a common feat for him to put a playing-card on the saddle, or a dollar piece under each foot in the stirrup, or under his knees, and ride a vigorous bucker. Still, he cannot ride a flat saddle until he learns the trick of it. And while no cowboy, without serving his apprenticeship in the hunting-field, would hold his own with practiced riders there, it is certain that he would much sooner learn to ride across country well than even the best of cross-country men could vie with him in controlling a vicious bronco, or, indeed, in riding over the rough country he is wont to cover. It is the universal experience of the Plains that the best English rider fights shy of ground which the cowboy will gallop over until he catches on to it, and confides in the sure feet of his little mount. Some men never learn to ride; but it stands to reason, ceteris paribus, that the man who makes riding his business will be a stouter horseman than one to whom it is a mere diversion.