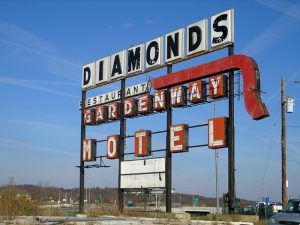 Large sign in Gray Summit, Missouri that advertised the Diamonds Restaurant and the Gardenway Motel by Kathy Weiser-Alexander.

Villa Ridge, Missouri, located on Route 66 in Franklin County, got its start as a stop on an old wagon road linking St. Louis to Springfield, Missouri, in the 1850s. Later, the Federal Government laid a military telegraph line between St. Louis and Fort Smith, Arkansas. Due to the rich and fertile farmland created by three rivers in the area, farmers first settled the land, many of whom were tobacco plantation owners who came from Kentucky with their slaves.

When the Civil War began, Missouri was in flux, with many of its residents having southern sympathies even though Missouri had officially joined the Union. Because of this, several battles were fought in Missouri, one of which occurred when Union troops stormed the Coleman House, stole the livestock, freed the slaves, and used the property as a hospital until the end of the war.

In the 1880s, a railroad station was established in the community, named by a railroad supervisor, who called it Villa Ridge, referencing the ridge that divides the Meramec and Missouri River watershed. 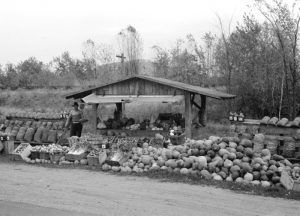 At some point, Andrew Groff and his family settled in the area and were successful enough to increase their acreage over the years. Their land included the highest point for miles around and would become the crossroads where the Ozark Trail, the St. Louis Rock Road, and the Old Springfield Road converged. In the early 1890s, the Groffs and two other families donated land to build a high school. In September 1894, Altamont High School, named by its first teacher, began accepting students, one of whom was Andrew Groff’s son, Spencer. After graduation, Spencer attended William Jewell College in Liberty, Missouri, and later returned to Villa Ridge to run the family farm. Not only was he successful as a farmer and a rancher, but he also became President of the Villa Ridge Milling Company and became involved in trading in the Merchant Exchange. After World War I, he suffered financial losses and opened a roadside stand in 1919 to sell produce and sodas at the junction of the Ozark Trail (later Highway 100) and the Old Springfield Road (later Route 66). 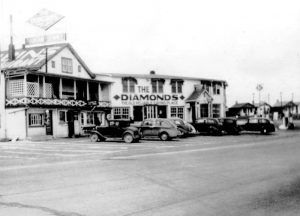 Over the years, his roadside stand expanded into a makeshift building, where he installed a gas pump and added more products such as sandwiches, buttermilk, and small evergreen trees that he dug himself. Over time, his business grew, and his debts shrank.

By the 1910s, the roads were improved by paving or gravel on the roadbed. In 1926, the two converging highways were paved between St. Louis and Gray Summit, and work continued towards St. Clair and Stanton.

In response, Groff built the first Diamonds Restaurant in 1927. It was named because the facility was constructed in the shape of a baseball diamond. As the volume of customers grew, they stayed open 24 hours a day. This invited truckers to stop to rest and get a bite to eat. Touted as the “World’s Largest Roadside Restaurant, it also sold Phillips 66 gasoline and rented cabins across the street. It eventually included two swimming pools that held a combined total of 180,000 gallons of water. 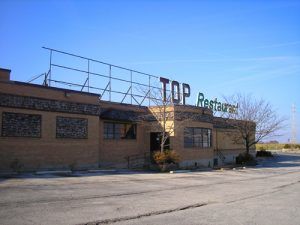 The old Tri-County Truck Stop in Villa Ridge, Missouri, was once the site of the Diamonds Restaurant. Photo by Kathy Weiser-Alexander.

Unfortunately, in the early months of 1948, the restaurant burned to the ground in a fire that blazed so furiously that Route 66 had to be temporarily closed. Afterward, Groff and Louis Eckelkamp, who had become a partner in the Diamonds operation in the early 1930s, rebuilt the Diamonds Restaurant. The new streamlined modern restaurant opened in 1950 with a pool and 25 cabins that later became known as Mission Bell Motel.

The Diamonds Restaurant suffered another blow in 1967 when Interstate 44 bypassed the facility. It continued to operate until 1969, when plans were made to move the restaurant. In 1972, another Diamonds opened at a new location along I-44, two miles east of the original location. Their original sign was moved to the new site. It was finally shut down and demolished in 1995.

In the meantime, the old 1950 site of the Diamonds Restaurant became the Tri-County Truck Stop (west of exit 251), a facility that operated until 2006. Though it is abandoned today, the building still stands. It is located at 144 Old Highway 66. 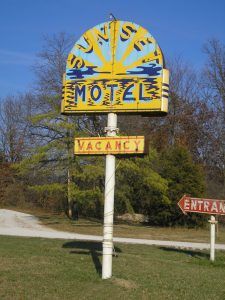 Other vintage Route 66 sites in Villa Ridge include the old Sunset Motel. Built by the Lovelace family, it opened in 1947 with 12 units that advertised Panel Ray Heat and Beautyrest Mattresses. It was sold to Oliver and Loleta Krueger in 1971. Though the motel was long closed, its historic neon sign was restored in 2009. The old motel is located at 427 Missouri Highway AT.

A bit further down the road at 1238 Highway AT is an abandoned Zephyr Station and Cafe on the south side of the road that is overgrown with weeds and quickly deteriorating.

A few more miles down the road, just east of exit 242, is the Indian Harvest Trading Post. Though not a vintage icon, it looks “inviting” as it is complete with a few buildings resembling teepees and lots of advertising, which gives it the “flavor” of old Route 66. 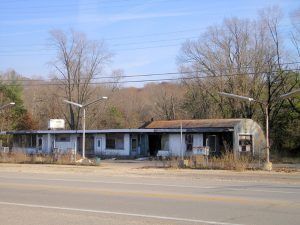 Strangely, however, this “retail” operation charges customers a $2 fee to come onto their property, which can be credited to a purchase in the store. But, much of the merchandise is very limited, factory-made appears to be imported, and is expensive. According to Trip Advisor, Yelp, and our own experience, this place is not recommended as an enjoyable stop, as the owners are described as aggressive, rude, and use foul language.

Today, Villa Ridge has a population of about 2,600 people. Route 66 continues from Village Ridge to St. Clair, a distance of about 12 miles. 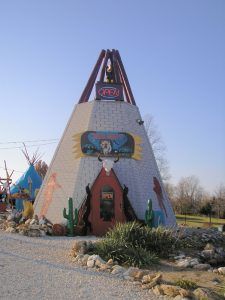