In Gray Summit, Missouri, a large sign advertised the Diamonds Restaurant and the Gardenway Motel by Kathy Alexander.

Gray Summit, Missouri, located on the original alignment of Route 66 just about five miles west of Pacific, Missouri, is an unincorporated community in northeastern Franklin County. 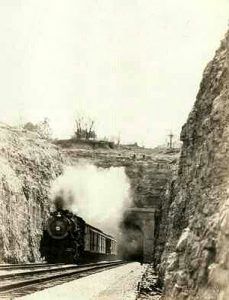 A post office was first established here in June 1824 with the name of Point Labadie for its location on a high point and proximity to Labadie Creek. In January 1838, the name was changed to Port William for William T. North, the postmaster. In 1845, Daniel Gray of New York built a hotel here, and a railroad siding was built in 1853.

When a town was platted in 1858 on land donated by E.P. Gray and other area settlers, the post office name was changed to Gray’s Summit. The name honored Daniel Gray, and the term “summit” was added because of its location on the highest place on the Missouri Pacific Railroad between St. Louis and Jefferson City. During the Civil War, the town was the site of a camp called Camp Franklin, which was sometimes referred to as Gray’s Camp. 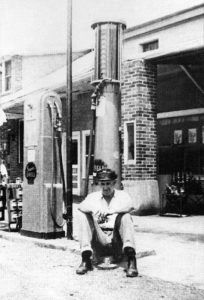 A Shell station on Route 66 in Gray Summit, Missouri.

In 1929, a railroad tunnel was dug when the railroad added a second parallel track on their busy St. Louis to Kansas City mainline. This project eliminated the original route that crested the watershed boundary between the Meramec and Missouri Rivers.

Gray Summit continued to grow through the years, especially when Route 66 barreled through. In 1926, the newly created US Highway 66 and Highway 50 were aligned through the community. In the early 1950s, Route 66 was too congested and realigned to the south, bypassing the central portion of the town.

One of the best stops in Gray Summit today is Parina Farms which allows visitors to pet and feed farm animals and provides demonstrations on sheep-shearing, cow milking, and caring for household pets. Another is the Shaw Nature Reserve which spans 2,400 acres of natural Ozark lands and 1.5 miles of Meramec River frontage. It dates back to 1925 and was named after Henry Shaw, the founder of the Missouri Botanical Gardens. 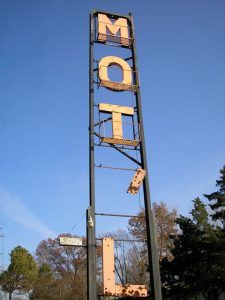 An old sign for the now-closed Trail’s End Motel on Route 66 by Kathy Alexander.

At 3218 W. Osage Street. On the south side of the road are the remains of the old Trail’s End Motel. The long narrow building is in ruins today, and its front yard is filled with junk cars. However, a large sign still calls attention to the site, spelling out “MOTEL.”

Route 66 continues just a few more miles to the southwest before entering Village Ridge. Along the way, visitors will pass by a large sign that once advertised both the Gardenway Motel and the Diamonds Restaurant. In 2013, the Diamonds part of the sign was removed, but the rest still stands in a commuter parking lot today.

A bit further down the road is the once-popular Gardenway Motel, named for the Henry Shaw Garden Way Road, when this old pathway once sported numerous native trees, shrubs, and plants. The first units of the Gardenway Motel were established in 1945 by Louis Eckelkamp, a short distance from his family’s home. Over the years, the motel grew to 41 rooms with tile baths. After Route 66 was abandoned to I-44, Eckelkamp added the long GARDENWAY sign on the roof to notify travelers on the interstate of his location. Unfortunately, the Gardenway closed in 2014 and now sits abandoned. 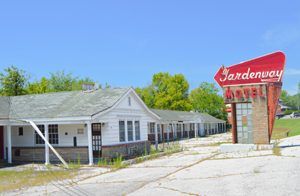