In 1860 one of the worst massacres along the Oregon Trail took place in Idaho.

The Van Ornum party assembled in Southern Wisconsin and departed in May 1860, most headed for Oregon’s Willamette Valley. They were joined by the Utter party in Omaha, Nebraska on June 5th.

They followed the Oregon Trail, without any major difficulties, arriving at the mostly abandoned Fort Hall, Idaho on August 21, 1860. Five discharged soldiers and one Army deserter joined the party at Fort Hall, which departed on August 23rd.

A company of 22 Army dragoons escorted the wagon train for only six days, purportedly because the commanding officer was upset with members of the train. The escort returned from near Twin Falls, Idaho on August 29th.

On September 8th the caravan arrived at Castle Creek, Idaho near the Oregon border. By that time the train included eight wagons, 44 people. That night some of their cattle were stolen by Indians. 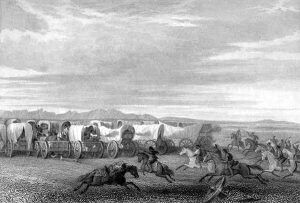 The next day while heading northwest they were charged by Indians near Castle Butte who were trying to stampede the stock. The wagon train formed a defensive circle to protect the livestock and offered food and other items to avoid conflict. No damage was suffered and the Indians soon left. It appeared that all would be well for the Utter-Van Ornum party and they continued westward.

However, just about one mile down the trail they were attacked by approximately 100 Indians, probably a mixed group of Shoshone and Bannock. A man named Lewis Lawson, who was traveling with the Van Ornums, and two of the discharged soldiers – Privates William Utley and Charles Kisnell were killed.

The next day on September 10th the train continued west.

In the late afternoon, they were attacked again and Judson Kressey, a member of the Van Ornum party, was killed. Toward evening, the group decided to make an attempt to break out by leaving half of the eight wagons and all of their stock to distract the Indians. With the mounted ex-soldiers in the lead, the wagons drove through the Indians and a man named John Myers was killed.

The attack continued and the survivors chose to abandon the wagons and flee on foot. A wounded Elijah Utter was shot down, and his wife, Abagel, and four of his children refused to abandon him. All of them perished.

Two of the pioneers – the Reith brothers, escaped down the trail after the soldiers, who had left the train. Sergeant Charles Shamberg, Privates Theodore Murdock and Henry Snyder, and Army deserter, Charles Chafee, who were well armed and well mounted, and were tasked with leading the pioneers, disappeared. According to Snyder’s later account, Schamberg and Murdock were later killed by Indians. Snyder would eventually make his way to civilization but reported there were no survivors except for himself. 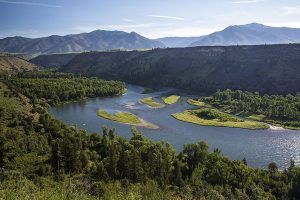 The remaining 27 survivors fled to the river and hid in the brush. They had only the clothes that they were wearing, some firearms, and a few basic necessities. They continued about a mile down the Snake River that night and could see their wagons burning behind them. For over a week they worked their way down the Snake River, hiding in the daytime, walking at night until the Indians no longer followed them.

On September 17, the group found and killed a starving cow. Two of the train’s members, Goodsel Munson and Christopher Trimble, went ahead of the others to seek help.

The next day the remaining members of the caravan, having traveled over 75 miles on foot, reached the Owyhee River crossing. Though they were physically very weak, they made a two-dugout shelter camp to wait for rescue.

On September 22nd Munson and Trimble came upon the Reith brothers – Jacob and Joseph, who were traveling with the Army deserter, Charles Chaffee, at the Malheur River trail crossing. Killing a horse, they sent Christopher Trimble back with meat for the those who had stayed at the Owyhee River. Christopher walked 19 miles to the pioneer camp but had to drop some of the horsemeat along the way because it was too heavy.

In the meantime, the Reith brothers, along with Goodsel Munson and Charles Chafee continued on down the trail.

Sometime later, a small group of Shoshone Indians found the Owyhee camp of pioneers. They traded some salmon with the survivors for a few of their meager possessions. However, the Indians forcefully took their guns. When the Indians left, Christopher Trimble went with them, becoming a willing hostage in hopes of securing more food for the pioneers. A few days later, one of the pioneers, Daniel Chase, would die after gorging himself on the Indians’ salmon.

On October 2nd the Reith brothers reached the Umatilla Agency. Munson and Chafee who were originally with them had only made it as far as the Burnt River before finally giving out. They were later found by a rescue party nearly starved to death.

On October 4th, the Van Ornum group, comprised of parents, Alexis and Abigail Van Ornum, their five children, a young man named Samuel Gleason and the two surviving Utter boys left the camp in hopes of finding a relief party. A short distance northwest of Farewell Bend, they encountered Indians. The three Van Ornum girls and their little brother Reuben were taken captive. The others were killed and their remains later found by soldiers in an old crater near the site. The soldiers, led by Lieutenant Marcus Reno reported that Mrs. Van Ornum had been whipped and scalped, Charles and Henry Otter had been killed by arrows, and Mr. Van Ornum, Marcus Van Ornum, and Samuel Gleason had their throats cut and were pierced by numerous arrows. The bodies were buried where they were found. 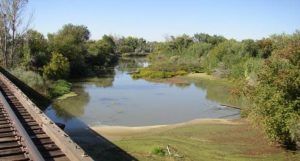 In the meantime, the refugees tried to survive along the Owyhee River. Elizabeth Trimble died on October 13th, Susan Trimble on the 18th, Danny Chase on the 19th, and Albert Chase on the 21st, all of starvation. After much discussion and prayer, the dead children were eaten by the remaining train members for survival.

On October 24th,, 45 days after the initial attack, an Army relief expedition led by Captain Frederick T. Dent from Fort Walla Walla reached the Starvation Camp. The soldiers rescued ten survivors including the Joseph Meyers family of seven, Elizabeth Chase and daughter Mary, and Emeline Trimble. They soon also found the remains of Christopher Trimble who had left the Owyhee camp with the Indians. He was thought to have been killed about two weeks previously.

Reuben Van Ornum, who had been kidnapped, was rescued by California Army Volunteers in November 1862 in the Cache Valley of Utah. The Shoshone claimed the boy was not Reuben, but instead the son of Chief Washakie’s sister and a French fur trapper, but he was given to Reuben’s uncle Zachias anyway and brought to Oregon. Unfortunately, the boy could not adapt to civilized life and returned to live with the Shoshone in early 1870. The three Van Ornum little girls had died of starvation while captives in 1861.

No other Oregon Trail wagon train suffered greater losses than the Utter-Van Ornum wagon train of 1860.