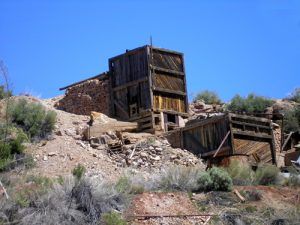 Alas, the homes that sprang so quickly
Soon were vacant, empty rooms.
But the pioneers who viewed them
Could not see them just decay,
And they brought their teams and wagons,
Hastily hauling them away.

Now, a scarred and lonely landscape
Greets the trav’lers wondering gaze,
As he comes to view the remnants
Of this camp of by-gone days.

And, so, we love your memory,
Sad old Silver Reef!
And your bright, new promise too,
Of a newer flow of metals,
lately Come to light,
That can even help our Nation in defending
What is right.

Located about 15 miles northeast of St. George, Utah, the “ghost town” of Silver Reef got its start when silver was discovered in the limestone cliffs of the eastern slope of the Pine Valley Mountains. Silver in sandstone?? It was unbelievable and has spawned numerous tales of exactly how the ore was discovered.

The most often told tale is when a prospector named John Kemple had been roaming the sandstone reefs in search of any metallic color back in 1866, he took shelter with a family in the Mormon settlement of Leeds. Welcoming the tired and chilled man into their home, they got the fire roaring to warm him up and as Kemple sat staring into the fire, he allegedly saw a small shining stream ooze from an overheated rock. The next day, he then began to search for the source of what he believed was silver. Though he did find a small sample, it wasn’t enough to keep him in the area and he soon moved on to Nevada.

A later story tells of an assayer in the notorious mining town of Pioche, Nevada, just across the state line, who was infamous for his overstated ore values. Referred to by area prospectors as “Metalliferous” Murphy, two miners decided to pull a prank on him and submitted pieces of a broken grindstone for assay. When Murphy predictably reported the fragments contained silver to the value of 200 ounces per ton, the miners revolted, threatening to hang Murphy if he didn’t immediately leave town. Murphy complied, but not before he tracked the source of the fragments of the grindstone back to the area that would soon be called Silver Reef. Murphy then headed to Utah in search of the “sandstone silver.” Though there is no record of the assayer ever filing a claim, he quickly drew the attention of other prospectors and silver was soon confirmed to be hidden within the sandstone rock formations, much to the surprise of many skeptical miners. It was the first and only time silver has been found in sandstone in North America. 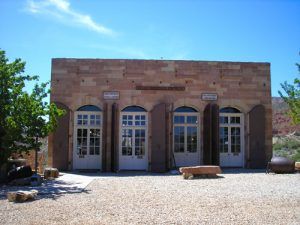 In 1874, John Kemple returned to the area and established the Harrisburg Mining District. Though he filed several claims, for unknown reasons he never developed them. Soon, word got out and the hills were crawling with prospectors.  The area drew the attention of two Salt Lake City bankers, who backed a well known prospector by the name of  William T. Barbee in 1875. The miner staked more than 20 claims and established a town he called Bonanza City. Though the settlement offered very little in its early days, the lot prices were so high that most miners couldn’t afford them and instead, established a tent city nearby that they simply called “Rockpile.”

After the mines closed in Pioche, Nevada in November of 1875, a number of businesses moved into the area, setting up their establishments in “Rockpile,” rather than Bonanza City.

The quickly growing community then changed the name to Silver Reef and by February, 1877, the camp was filled with more than 1,000 men looking for their fortunes.

Within no time, the town boasted more than 100 businesses stretched out along a mile long main street, including nine grocery stores, six saloons, a newspaper called the Silver Echo, eight dry goods stores, a bank, a Wells Fargo office, a hospital, hotels and boarding houses, and five restaurants.

Though surrounded by Mormon settlements, Silver Reef never had a Mormon Church, rather, the Catholic Church was the only one in town, a building they allowed the Presbyterians to use for services. A school was also built that other denominations used for services and where the community also held public meetings and celebrations. The building was moved to nearby Leeds in the early 1900s. 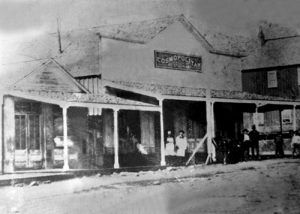 By 1879, the town was called home to some 2,000 people and included a horse race track, a brewery and a brass band. But, it was a bad year for the settlement, as a major fire swept through the town, the price of silver dropped, labor disputes erupted in the mines, and flooding occurred in many of the low level mine shafts.

However, Silver Reef endured, centered within a six mile area of active mines, from which came more than a million dollars in ore each year. But its demise was on its way. In late 1881, silver prices dropped world wide, the mines were filling with water at rate faster than the workers could pump it out, and mine owners began to lower wages.

Most miners could no longer afford to stay and began to move.  By 1884, most of the area mines had closed and Silver Reef was quickly becoming a ghost town. By 1890, less than 200 people remained in the area and the following year, the last mine shut down, though ore continued to be brought out of the area for the next decade. Over the years, Silver Reef produced about 25 million dollars worth of ore.

In the early 1900s many of the remaining buildings were demolished and in 1908 a fire destroyed most of what was left.

Today, a couple of historic buildings continue to stand in Silver Reef, as well as a collapsed mine, numerous foundations and ruins, and two cemeteries.

The 1877 Wells Fargo Office was utilized as a residence until the late 1940’s. Listed on the National Register of Historic Places, today it  serves as a museum and art gallery.

The 1876 Rice Bank Building was completely taken apart and then rebuilt to be utilized as a jail during a major mining dispute in the late 1800’s, continues to stand. During the conflict, one mine foreman was run out of town and another tarred and feathered. The authorities then arrested the union leaders, but because of the limited space in the old bank building, a line was drawn around the building to “hold” the men. Anyone crossing the line was threatened with being shot. In 1991 the building was fully restored.

Behind the Wells Fargo building is a restored powder house that serves as an information center. 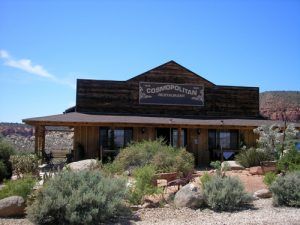 The Cosmopolitan Restaurant appears to have been rebuilt to appear as it did more than a century ago. Though it looks rustic on the outside, the gourmet restaurant serves European Cuisine in a fine dining atmosphere.

Scattered around the town are numerous abandoned ruins and foundations, especially in the gully behind the old town site, where crumbling mine building continues to stand. The formerly mile-long main street has been reduced to several hundred yards and is surrounded by an up-scale community of private homes, on a private drive restricting public access. Nearby are the remains of both a Catholic and a Protestant cemetery.