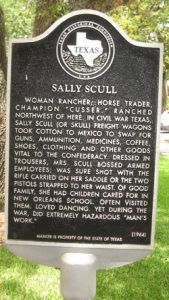 Second only to becoming famous as one of Jack the Ripper’s victims would be gaining celebrity as one of Sally Skull’s husbands. A man would be joining the ranks of a now-defunct exclusive club of five once-frisky members. Some say Sally didn’t always wait to get a divorce, and perhaps took the easy way out. She killed them.

“I don’t give a damn about the body, but I sure would like to have the $40 in that money belt around it,” muttered Sally, referring to the drowned remains of Husband #4.

Such acquisitive sentiments were not uncommon with Sally, known throughout Texas as a woman who could shoot, trade horses, ride, and lasso as good as any man. Better. We know she could shoot flawlessly, ride like a man, and cuss like a muleskinner. We also know that she loved dancing and draw poker.

Most of all, Sally loved men. She had a total of five husband-notches in her gun belt, all of whom felt her dominance. “Dogmatic and determined, she possessed so much strength that none of her husbands could stand living with her for very long,” states the book, Outlaws in Petticoats.

She was born Sarah Jane Newman in Pennsylvania about 1817 or 1818. Her grandfather, William Rabb, was one of Stephen F. Austin’s Old Three Hundred and was given virgin land in exchange for building a gristmill and sawmill in what is now Fayette County. The family had to learn survival tactics, as they were now in Comanche territory where something as simple as failing to extinguish a burning candle could result in death, if marauding savages, aided by the candlelight, shot their deadly arrows through cracks in the cabin walls.

One evening, Sally’s mother, Rachael Newman, spied a hostile Indian’s foot under the space between the bottom of the cabin door and the dirt floor, trying to raise the door off its hinges. Rachel reached for a double-bit ax, “raised it above her head, and with a quick, swift motion, chopped off the heathen’s toes. When other Comanches tried to enter the cabin through the chimney, she set fire to a feather pillow and sent smoke up the chimney,” setting them ablaze. She was courageous, crafty and audacious.

Sally inherited a strong constitution from her mother’s examples and showed great courage in the face of danger, even as a young girl. Reports Outlaws in Petticoats, “Once she watched as two Indians spied on them from the bushes. At the time, she, her sister, and mother were entertaining a neighbor. When the visitor realized that Indians were approaching, his nerve left him, and he pretended his gun was broken. ‘I wish I was two men,’ he said feebly, ‘then I would fight those Indians.’ ‘If you were one man,’ cried Sally, ‘you would fight them! Give me that gun!'”

Sally lived the life of a gunslingin’, horsetradin’, hardened man, some of that talent having been learned from Husband #1, Jesse Robinson. He was born in Kentucky in 1800 and his father had been a soldier in the Revolutionary War. They say he came to Texas in 1827 and in 1831, he received title to one-fourth of a league of land in De Witt’s Colony in Gonzales County.

It was as a volunteer in a posse dedicated to the protection of Austin colonists that Jesse first met Sally, then still a little girl. The posse rescued the Newmans from 200 Waco and Tawakoni Indians who were trying to burn them alive. Just imagine the heroic sight of Jesse driving off the marauding savages and coming to the rescue of the Newmans. That would have remained in the mind of any little girl, as it did in Sally’s. When she got older, she would marry her hero.

In 1839, Jesse received 640 acres of land for his participation in the battle of San Jacinto and he was present when Santa Anna surrendered to General Sam Houston. In addition he received a certificate for 320 acres in 1838 for serving in the army from March to June 1836, but sold it for $50. That may have been the influence of his new wife, 16-year-old Sally, whom he had married in May of that year. Jesse and Sally subsequently had two living children, Nancy (more about her later) and Alfred, who became a Texas Ranger and fought in theCivil War.

No matter Mr. Robinson’s heroic deeds, he became famous more for being the first husband of Sally Scull than for any brave exploits in defense of his kin and country. Legend tells us he should have received a great deal of land just for putting up with Sally, who was not blessed with a kind, serene, wifely nature. 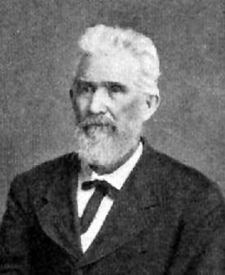 An excerpt from the memoirs of legendary Texas Ranger Colonel John S. “Rip” Ford lends credence to the legend that she would soon become:

The last incident attracting the writer’s attention occurred while he was at Kinney’s Tank, wending his way homewards from Corpus Christi Fair, 1852. He heard the report of a pistol, raised his eyes, saw a man falling to the ground and a woman not far from him in the act of lowering a six-shooter. She was a noted character named Sally Scull. She was famed as a rough fighter, and prudent men did not willingly provoke her into a row. It was understood that she was justifiable in what she did on this occasion, having acted in self defense.”

It wasn’t only self-defense that got Sally riled up enough to shoot. She was described as “a merciless killer when aroused” and there were those who said it didn’t take much to arouse her. She decided who needed killing and obliged those hapless men who fell into that unfortunate category. Occasionally, she just had a little gunslingin’ fun, like the time word got back to her of nasty remarks a stranger had made behind her back. She found the man and menacingly snarled, “So you been talkin’ about me? Well, dance, you son of a bitch!” and began blasting away at his boots with her six-shooters sounding like a Gatling gun and aiming at his fast-moving feet like they were a pair of glass bottles standing still on a stone wall. This caused him to do a mighty fast dance in the dusty street. It sure couldn’t have been a waltz. Nobody knows the original remark that set Sally off but it must’ve been awful insulting.