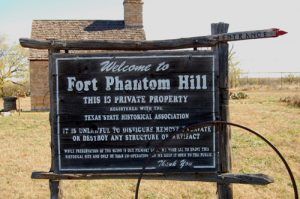 Located in Jones County, Texas, Fort Phantom Hill is one of the most pristine historic sites in the Lone Star State. Built in the early 1850s to protect the westward-moving pioneers, the historic site not only provides today’s visitor with a rich historical view of the past but is also said to be extremely haunted.

In 1849, the federal government sent Captain Randolph B. Marcy to explore the vast region to the north and west of Austin to establish a route through the area. Long inhabited by the warlike Comanche Indians, the area was known as the Comancheria. The purpose of Marcy’s exploration was to establish a safer passage for immigrants headed to the California goldfields. As a result of Marcy’s recommendations, a cordon of forts, including Fort Phantom Hill, were established on the new route through the Comancheria.

Acting on orders from General Persifor F. Smith, Lieutenant Colonel John J. Abercrombie arrived at the Clear Fork of the Brazos River with five companies of the Fifth Infantry on November 14, 1851. His first impression was not a good one, as a wet snowstorm blew in killing one teamster, and twenty horses, mules, and oxen that froze to death.

Also, Abercrombie found, much to his dismay, that the site had neither wood for construction nor suitable water for the men and the animals. Though he sent word of the poor conditions the orders were unchanged and construction on the fort began. What was unknown to both Smith and Abercrombie is that the fort was being built at the wrong location. Smith had just recently taken command from his ailing General who had been supervising the construction of the forts along the route.

The plan had been to build the fort at a site in Coleman County but Smith, unfamiliar with the area, changed the locale to the Clear Fork near its junction with Elm Creek. This decision affected the post’s future as the fort was built in an area with inadequate water and building timbers to supply the needs of the new garrison.

Stone was brought in from Elm Creek about two miles south of the fort and oak logs for the officers’ quarters and the hospital had to be brought in by ox wagon from as far away as forty miles. The guardhouse, magazine and commissary storehouse were built entirely of stone, but the other buildings were built in an adobe style. 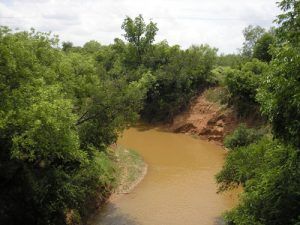 Fort Phantom Hill was never officially named. Rather, it was simply referred to as the “Post on the Clear Fork of the Brazos.”  There are two legends about the origin of the unofficial designation Phantom Hill, the first of which is that the hill rises sharply from the plains when approached from a distance, but seems to level out as it is approached, vanishing like a phantom. The second account is that of a nervous sentry who fired on what he thought was an Indian on the hill. The investigation that followed failed to discover the presence of any Indians, and one of the troopers suggested that the man had seen a ghost.

Life at the fort was difficult for the soldiers as Elm Creek was often dry, and the waters of the Clear Fork were brackish.  Early on, an eighty-foot-deep well was dug near the guardhouse, but even it was not always reliable. More often than not, it was necessary to haul barrels of water in wagons from a spring about four miles upriver from the post. Because of the lack of water a post garden could not be toiled, leading to a shortage of vegetables in the men’s diet. As a result, the soldiers began to suffer from scurvy, fevers, dysentery, colds, and pneumonia. Desertions at the fort were said to have been common due to the monotony and loneliness at the isolated fort. 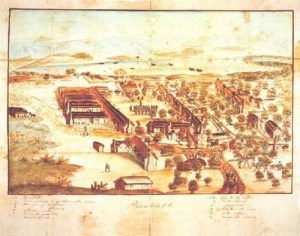 One member of the garrison, Lieutenant Clinton W. Lear wrote a letter to his wife in Fort Washita, Oklahoma that described it this way:

“When I say to you that we have a beautiful valley to look upon, I have said everything favorable that could be said of this place. We are camped in a grove of blackjack two or three hundred yards from the creek which is alt. Everybody is disgusted. Like the Dove after the Deluge, not one green sprig can we find to indicate this was ever intended by man to inhabit. Indeed I cannot imagine that God ever intended for white man to occupy such a barren waste.”

Although the isolated fort was vulnerable to attacks, its garrison had only peaceful encounters with the Indians, including the Comanche, Lipan, Wichita, Kiowa, and Kickapoo. Because its occupation was relatively uneventful, the fort was abandoned on April 6, 1854. At the time of its evacuation, the Indian menace had been curbed due to the establishment of reservations on the upper Brazos and the Clear Fork to the northeast.

As the troops marched out of Fort Phantom headed toward El Paso, the looked back to discover the fort was in flames. The event was blamed on the Indians or Confederate troops, but many said that it was the members of the garrison, because of their distaste for the post, who set the fire. 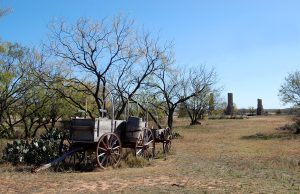 In 1858 the remaining structures of the fort were repaired and utilized as a way station the Southern Overland (Butterfield) Mail Stagecoach Line. During the Civil War, Colonel James B. (Buck) Barry and some of his units used Fort Phantom Hill as a base of field operations. Beginning in 1871, the fort served as a sub-post of Fort Griffin, near the site of present Albany, Texas.

After the Indian Wars subsided, a town grew up around the fort ruins. In 1876-77, it was a buying and shipping point for buffalo hides. By 1880, Fort Phantom had a population of more than 500 and was made the Jones County seat the following year in May 1881. However, that was a short-lived title, as the county seat was moved just six months later in November to nearby Anson, Texas.

The Texas and Pacific Railway routed its tracks through Abilene, 14 miles to the south. A letter written to the San Antonio Express in 1892 commented that Fort Phantom contained nothing but “one hotel, one saloon, one general store, one blacksmith shop, and 10,000 prairie dogs.”

2 thoughts on “The Ghosts of Fort Phantom Hill, Texas”