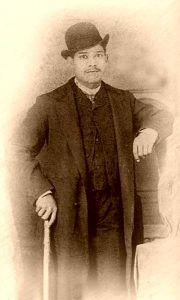 Samuel Fields was a born a free man around 1849 and raised in Louisiana. In 1864, at the age of 15, he joined the Union Army where he served as a private in the 114th Infantry Regiment, Company F. After receiving a distinguished service discharge, he returned to Louisiana where he worked as a farm laborer.

However, when news arrived about the gold rush in Deadwood, Fields joined the thousands that flocked to the Black Hills in search of their fortunes. Arriving in Deadwood in 1876, the flamboyant man, who went about saying that he had been a general in the Union Army during the Civil War, immediately drew the attention of Deadwood’s newspapers. Described with words like irrepressible, duplicatory, and candescent, he was often referred to as Ni**er General, General Fields, or General Darkey. Seemingly unbothered by the racial slurs, Fields, too, often referred to himself as the “sly-coon.”

Becoming an active participant in Deadwood’s African-American Community, which was even more of a minority than the Chinese, Fields was quick to speak out at the many “Colored Citizens Meetings,” as well as city political gatherings. An eloquent speaker, he soon earned yet another nickname – the “Shakespearian Darkey.”

So “entertaining” was Fields, that the local papers often took his words out of context to provide even better stories for their readers. Such was the case when Fields correctly identified a tornado that touched down in Deadwood Gulch as a cyclone in June 1881. Reporting on his statement, the Deadwood Times snidely referred to it as a “Sly-Coon,” which added that nickname to Samuel’s already growing list of monikers. While sometimes the newspapers reported legitimate news about Fields, it was often such trivial events such as “The Shakespearian Darkey attacked by snowballs” and “Wonder what bar the darkey cleaned up this morning?”

The quick-talking man seemed to be everywhere in Deadwood and in April 1878; he was arrested as a murder accomplice when Bill Gay shot and killed a man named Lloyd Forbes who was having an affair with his wife. According to the tale, Fields had carried a note between the lovers, when Bill Gay intercepted it. Gay, who was a leading citizen in Deadwood and after whom, the adjacent camp of Gayville was named, defended himself on the basis that the killing was an accident. Gay argued that he only meant to pistol-whip Forbes and the gun had gone off by accident.

Fields was arrested on the same day as was Gay and kept in jail for several weeks, mostly for his own protection. Though Fields soon went free, Bill Gay was found guilty of second-degree murder and sent to prison. Though Fields had been vindicated, there were many of those in the camp who believed that he should be made to leave.

The next thing you know, the “General” was arrested for stealing from “Lola’s Place” in July.  And, his bad luck continued when Deadwood’s first public school teacher was murdered in her sleep in August, it seems that Fields was either constantly in the wrong place at the wrong time or had become the focus of blame for any evil that was taking place in the camp.

Almost immediately after Minnie Callison had been found murdered, rumors began to circulate that the “General” had been seen outside her room that same night. To further complicate matters, Officer Siver found footprints in her yard that were the same size as Fields.  Minnie’s husband, John Callison, was convinced that Fields was her murderer. On August 20, 1878, Samuel was arrested, and though he was later released, it was yet another “stigma” that continued to hang over his head.

Then, in December 1878, the papers reported that Fields had prevented a woman named Annie Simms from committing suicide, so it seems it wasn’t all mischief that the papers were reporting on.

In 1879, Fields’ name was submitted for the position of Justice in Deadwood and by November he was once again practicing his “Shakespearian” oratory skills on soapboxes. But the camp hadn’t forgotten his alleged “criminal” past and he was egged by the audience. Though he didn’t win the election, it didn’t curb his political ambitions. In 1883, he was working to fill the vacant position of the coroner and did, in fact, fill the position temporarily.

During Fields’ time in Deadwood, he was known to have worked at the Merchants, Wentworth, and International Hotels as a porter and as a waiter. By 1889, he had moved on to Omaha, Nebraska, but a year later, he was again back in South Dakota, working as a bellhop in Rapid City. Afterward, his whereabouts are lost in history. 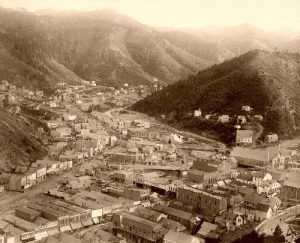