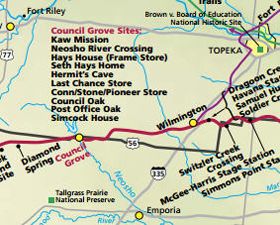 The first white settlers in Wabaunsee County were said to have been a band of outlaws known as the McDaniel Gang. They built a log house in 1842 near present-day Harveyville with a plan to rob travelers along the area’s roads. From a high mound nearby, they could observe the Santa Fe Trail and Mexican traders, paymasters, and gold-seekers. This nest of robbers was broken up after the killing of 27 Mexican traders and the robbery of 500 mules, and the treasure box was said to contain $75,000 in gold. Government authorities were notified, and authorities immediately gave chase to the robbers. In the end, 19 of the outlaws were killed in a gunfight, and five were sent to prison for life. The money was never recovered by the owners. However, legend has it that much later, a “preacher-fisherman” came to the area, dug up the gold from beneath the ruins of the log cabin, and left as mysteriously as he came.

The Santa Fe Trail crossed the corner of Wabaunsee County at Wilmington. Located at the junction of the Santa Fe Trail and the Military Road from Fort Leavenworth, by way of Topeka, this was once an important stop along the trails. H. D. Shepard established the community in 1856, and the following year, several settlers made Wilmington their home. A post office was established in May 1857, and Wilmington was on its way to becoming a thriving community, replete with several establishments catering to trail traffic. In 1858 a stone hotel was built, and the town provided stage service. The citizens established a school district in 1861 and, in 1870, built a stone schoolhouse, which continues to stand today. But, the town wouldn’t thrive for long because the railroad was on its way. Its post office closed in October 1906, when residents received their mail from Burlingame. Still, in 1910, it was called home to about 69 people. These, too, would make their way to other places. All that is left today of the old community is the stone school building, now owned by the Flint Hills Chapter of the Santa Fe Trail. Wilmington is located about six miles west of Burlingame.

The trail then continued into Lyon County.