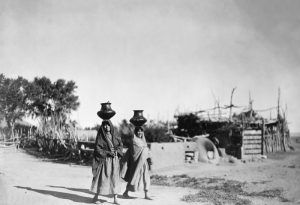 Santa Clara Pueblo is a Tewa Indian settlement along the Rio Grande in north-central New Mexico that has been home to these Puebloans for hundreds of years. Established in about 1550, the pueblo, Kha’po Owingeh, is a member of the Eight Northern Pueblos of the Tewa-speaking Pueblo Indians.

The Santa Clara people’s ancestors came from the Puye Cliff Dwellings about 10 miles west of the current Santa Clara Pueblo. The people lived at Puye for approximately 300 years before giving up the cliff dwellings due to drought in about 1550 AD. At that time, the Puye community housed up to 1,500 Indians. At both their old home and newer pueblo, the Tewa relied on both irrigation farming and hunting for sustenance. 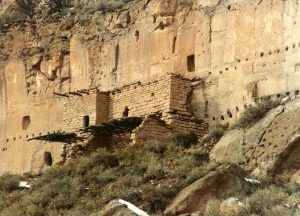 The pueblo was first visited by Europeans when Francisco Coronado’s expeditionary force came to the area in 1541. The Puebloans met Juan de Oñate and his exploration party on July 11, 1598. At that time, the Spanish established a more permanent settlement in the region, bringing colonists and Franciscan priests who began establishing missions. At the time of the Spanish arrival, the Tewa had been subject for many years to raids by Apache, and Navajo warriors and the people at Santa Clara Pueblo saw an opportunity to use the Spanish as allies.  After the region’s annexation into the Spanish Kingdom, and as part of the 1601 expansion of Juan de Oñate’s colonial capital, a chapel was built at Santa Clara by 1617. Fray Alonso de Benavides established a mission at Santa Clara in 1628 as a visita (satellite community) for the Ohkay Owingeh Pueblo (formerly the San Juan Pueblo). The visita included a chapel for the use of a visiting priest.

However, pressures from the Franciscan priests to convert the Tewa people to Catholicism and Spanish demands on native labor fostered resentment in the pueblos which led to the Great Pueblo Revolt in 1680. By that time, the Santa Clara people had already abandoned the mission and joined with the others to fight against the Spanish royal government. During the revolt, the original chapel was destroyed. The revolt resulted in the Spanish leaving New Mexico for the next 12 years.

When the Spanish, led by Don Diego de Vargas, returned to re-establish their control in the region in 1692, the people of Santa Clara Pueblo joined with those of the San Ildefonso Pueblo. Together at a fortified settlement on Black Mesa, they resisted the Spanish until 1696. Afterward, they escaped and lived with the Hopi and Zuni. Many later returned to Santa Clara Pueblo in 1702, rebuilding the community and farming again in the Rio Grande Valley. Another church with a choir loft was built after the people returned. By the 1750s, however, the church had fallen into disrepair and collapsed. Fray Mariano Rodríguez organized the construction of a new church in 1758. He and the people of Santa Clara constructed a long and narrow church. The church reportedly was built at the friar’s expense, and the progress was slow but was eventually completed. It lasted for more than a century during a period of drastic changes like the epidemic of smallpox in 1782, which carried off a large portion of the pueblo’s population, and Mexican Independence in 1821. 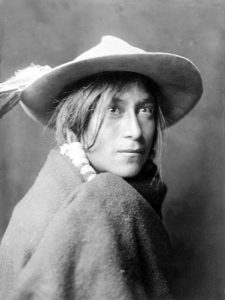 The community persisted through the American acquisition of the territory, growing wheat and corn, and raising cattle. In 1858, Santa Clara Pueblo became one of the first Pueblo groups to have land claims recognized by the U.S. Congress.

Although the people of Santa Clara were resilient, the colonial period adobe church was not standing the test of time well. The 1758 building lasted until around 1909 when the old church was given a more “modern” peaked roof, and the old vigas that provided structure and support for the walls were removed. Unfortunately, the building collapsed as a result of the changes. Several years later, a new church was built in 1918, which continues to stand today.

The people of Santa Clara Pueblo survived the Spanish Colonial, Mexican, and American political control of the larger region and today are members of the Eight Northern Pueblos. Santa Clara Pueblo is listed in the National Register of Historic Places as a historic district, and the tribe is federally recognized. The Santa Clara Pueblo is the second largest of the Tewa-speaking Pueblos. The pueblo complex’s historic section consists of one and two-story adobe houses surrounding two main plazas with two rectangular ceremonial kivas and the church. 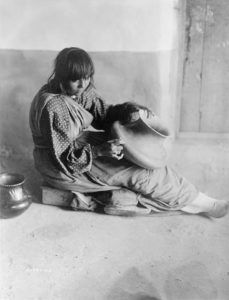 Today the Santa Clara Indians are noted for arts, crafts, and black polished and red polychrome pottery and provide recreational opportunities and tours to the ancient 740-room Puye Cliff Dwellings. The pueblo welcomes visitors and is open daily. Visitors to the pueblo must check-in at the governor’s office, where photography, sketching, and video recording permits are available throughout most of the year, except for feast days.