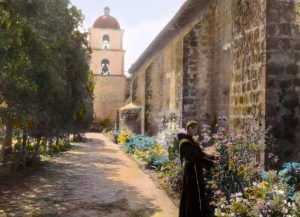 Mission Santa Barbara was the 10th of 21 California missions founded by Franciscan priests during the 18th and early 19th centuries.

The Mission grounds occupy a rise between the Pacific Ocean and the Santa Ynez Mountains and were consecrated by Father Fermín Lasuen on December 4, 1786, the feast day of Saint Barbara. The mission is the only one that has remained under the leadership of the Franciscan Friars since its founding. The mission is the namesake of the city of Santa Barbara as well as of Santa Barbara County.

Before the Spanish arrived in the area, numerous American Indian tribes populated the west coast. The mission was established to contact and convert the Chumash people, who lived along the coast between Malibu and San Luis Obispo. The Chumash were skilled artisans, hunters, gatherers, and seafarers but had no formal agricultural system.

When Padre Fermín de Francisco de Lasuen first started the Santa Barbara mission in 1786, he aimed to bring religious and sustainable farming practices to the native population. The first mission church at Santa Barbara was built of logs with a thatched grass roof in 1787. It was rudimentary and soon required replacement in 1789. As the mission grew, so did the scale and quality of its church building. The church that dated from 1794 was constructed from adobe and tile. 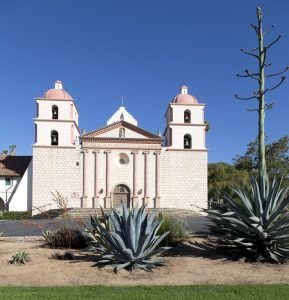 The fourth and present church was conceived after the great earthquake of 1812 destroyed the church and the village. In 1815 construction of the new and present church began. Converted natives accomplished most of the labor under the guidance of master stonemason Antonio Ramirez. The new stone church was essentially complete by 1820, and its classical-inspired façade was one of the finest works of architecture in California at the time. The new church was immense at 179 feet long and 38 feet wide, with its interior containing six chapels. The main walls were made of local sandstone, and the exterior had heavy buttresses for support. Two symmetrical towers adorned the façade along with classical elements such as Ionic pilasters, an entablature, and pediment. In addition to the church, the Santa Barbara Mission also consisted of housing for the priests, workshop space, storehouses, and hundreds of small adobe huts for native housing.

Throughout the early 1800s, life at the mission revolved around agricultural pursuits as well as religion. Thousands of cattle, sheep, goats, pigs, mules, and horses thrived on the mission’s land. The Franciscans and converted Indians tended crops of wheat, barley, corn, beans, peas, oranges, and olives. As early as 1807, an impressive aqueduct system was implemented that included a dam across nearby Pedregoso Creek. Water was diverted into a large settling tank for filtration and then collected 500 feet from the mission church in a stonewalled reservoir. A fountain and a long laundry trough sprang from the reservoir by 1808. The fountain and reservoir are still intact just outside the church today. 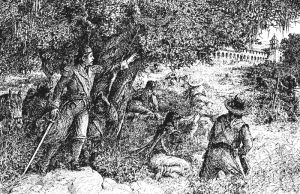 The missionaries met with little opposition from the area Indians and no forcible resistance during the building of five missions in the area. However, some of the bands began to resist missionary ruling, and in 1824, the Indians at Santa Barbara, Santa Inez, and La Purísima revolted against the mission authority, though there were few lives lost.

In 1834, after Mexico achieved independence, a new law dictated the secularization of the missions, including the one at Santa Barbara. For the other 20 Spanish missions, secularization led to land division, abandonment of buildings, and ultimately disrepair and severe ruin. The Santa Barbara Mission, however, managed to escape this type of neglect and decay. Although its buildings and lands were sold, the Franciscan friars were allowed to stay and occupy the mission. It soon became the Franciscan capital of California, and in 1842, California’s first bishop arrived at the site to establish the seat of his diocese. 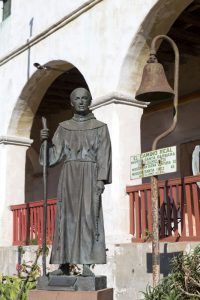 By 1853, the church had founded a Franciscan missionary college, and while the other 20 missions languished in various states of abandonment, the Santa Barbara mission thrived. In 1865, President Lincoln returned the mission’s buildings and 283 acres of land to the Catholic Church. From 1869 to 1877, the mission also functioned as a college for lay laymen, making it Santa Barbara’s first institution of higher education. In 1896 this education initiative was led to creating a high school seminary program that in 1901 would become a separate institution, Saint Anthony’s Seminary. While several of its buildings had been altered over the years, the mission church itself remained essentially the same as the day it was constructed.

The church survived remarkably intact until tragedy struck in 1925 when a violent earthquake shook southern California. The church suffered severe damage, including the complete collapse of the eastern tower. Interior fixtures, furnishings, and art were mangled by falling stone from the church’s walls. Luckily, the building’s seven massive buttresses held fast, and much of the exterior remained standing. Since the church had been carefully documented, a complete restoration was possible. The entire building was then reconstructed, mainly using original stone, by 1927.

In 1929 the college-level program was relocated to Mission San Luis Rey de Francia. It would become San Luis Rey College from 1950 to 1968 before relocating to Berkeley, California, the Franciscan School of Theology today.

The church sustained only one other major renovation project when, in 1950, the settling of the building caused dangerous cracking in the towers. The damage required the dismantling of the entire façade, including the two towers, and its reconstruction on new, solid foundations. 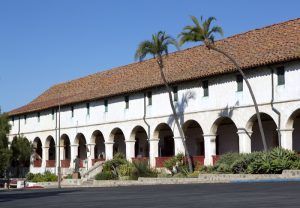 Over 200 years after its construction, the church is still home to an active parish and an active community of Franciscan friars. The current mission property, encompassing 12 acres, now houses a retreat center and museum and displays its historic cemetery, beautifully landscaped gardens, and aqueduct system/fountain for visitors. Surrounded by 200-year-old sandstone walls, the Historic Mausoleum is situated in the center of the cemetery, has served as a final resting place for Franciscan friars since 1893.

In addition to its nationally landmarked architecture, the mission is a significant repository of historical records, art, and objects from all eras of California history. The Spanish altar is original, and the Stations of the Cross came from Mexico in 1797. Hundreds of other religious and secular objects, statuary, paintings, and memorabilia remain in the church’s collection. Many of these are on display within the church itself or interpreted for visitors in the Santa Barbara Mission’s museum.

Today, a National Historic Landmark, the Santa Barbara mission church is the only original mission church to survive unaltered into the 21st century. Its historic sanctuary light has never been extinguished. Self-guided tours are available daily, and docent-led tours occur regularly on weekends. There is an admittance fee. 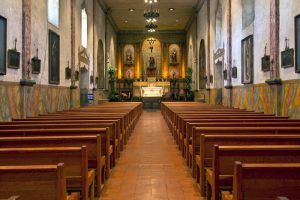