The Chumash are a linguistic family who traditionally lived on the coast of southern California, who were also known also as Santa Barbara Indians. Chumash is believed to mean either “bead maker” or “seashell people.” There were seven dialects of the Chumashan family. All were fairly similar except the San Luis Obispo, which stood apart. Evidence was found showing that they have had settlements on the Channel Islands and Santa Monica Mountains as far back as thousands of years ago. At their peak, there were over 20,000 Chumash living along the California coastline. The historic Chumash were a maritime culture, using long wooden canoes called tomols to fish and travel between different villages along the Pacific coast. They also hunted and gathered to provide for themselves. Their grass houses were dome-shaped and often 50 feet or more in diameter, and several families inhabited each. 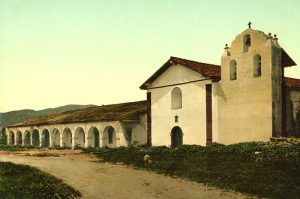 Europeans first visited them as early as 1542, when Portuguese explorer Juan Rodríguez Cabrillo spent some time in their territory, meeting with an exceedingly friendly reception. More explorers followed and five missions were established by the Franciscans among the Chumash; those of San Luis Obispo, San Buenaventura, Santa Barbara, La Purísima, and Santa Inez, from 1771 to 1804. The missionaries met with little opposition and no forcible resistance. However, some of the bands began to resist missionary ruling, and in 1824, the Indians at Santa Barbara, Santa Inez, and Purísima revolted against the mission authority, though there were few lives lost.

Even during mission times, the Chumash decreased greatly in numbers and continued to decrease as more and more white settlers moved into their lands. By 1900, their numbers had declined to just 200. However, several bands continue to exist today, though they have no reservation lands. Only the Samala, or Santa Ynez Chumash, have received federal recognition. However, there are an estimated 5,000 people who identify themselves as Chumash. Many California cities still bear Chumash Indian names, including Simi Valley, Point Mugu, and Malibu.