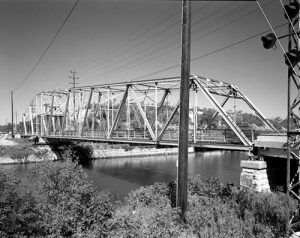 Romeoville, Illinois, some 30 miles southwest of Chicago, was first called Romeo when nearby Joliet was still called “Juliet.” At this time, the settlement was a twin and rival community of Juliet, unlike the romantic pair of Shakespeare’s era.  Founded in the 1830s, the area was home to abundant farmlands and stone quarries. A post office was established in Romeo on October 29, 1833.

In 1845, the city of Juliet’s name was changed to Joliet to honor the famous explorer Louis Jolliet. When this happened, Romeo acknowledged the busted romance by becoming “Romeoville.” Located on the west bank of the Des Plaines River, Romeoville supplied Chicago with produce sent to the city along the historic Illinois & Michigan Canal System, opened to commercial traffic in 1848.

However, its primary economic source was the numerous limestone quarries in the area, and the town soon gained the nickname “Stone City.” In its heyday, two trainloads of limestone were shipped from Romeoville every morning on the Chicago Rock Island and Pacific Railroad. One of the most famous buildings constructed with Romeoville limestone was the Illinois State Capitol Building in Springfield.

During the early 1900s, Romeoville thrived as a resort town for wealthy Chicago area residents who flocked to Isle La Cache and Romeo Beach. At that time, a streetcar line ran from Chicago, bringing along the folks who supported Romeoville’s three taverns.

Prohibition and the Great Depression also helped to shape the character of Romeoville when saloons along the canal became numerous. 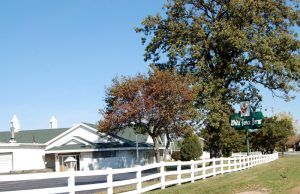 One original business in Romeoville that was in existence even before Route 66 came through is the White Fence Farm, which was established in the early 1920s. Situated right on Route 66, the roadside restaurant, which opened in a converted farmhouse, was first known for its hamburger sandwiches and Guernsey milk products, including ice cream. When U.S. Route 66 opened in November 1926, White Fence Farm had already served several thousand customers. It was operated by the original owner, Jack Peabody until he died in 1946.

Since 1954, the restaurant has been owned and operated by the Hastert family, who expanded the building several times, so much so that it now has seating for more than 1,000 customers. It also features a side room and gallery that includes an antique car collection, other antiques, and Jack Peabody’s collection of original Currier & Ives prints, among other nostalgic displays. Today, it is renowned for having “the world’s greatest fried chicken.”

The coming of concrete as a building material spelled the decline of quarrying, and Romeoville’s importance was greatly diminished. Lacking new industries, the town’s population gradually declined during the first half of the 20th century.

However, in the late 1950s, Romeoville annexed several parcels of land, building new subdivisions. The new homes soon filled up, and Romeoville began to grow again, the population increasing from 197 in 1957 to more than 3500 by 1960. Today, Romeoville is home to about 40,000 residents with several distribution centers, national companies, and corporate offices.

Continue your journey through Romeoville to nearby Joliet which provides a number of historical buildings and vintage Route 66 icons.