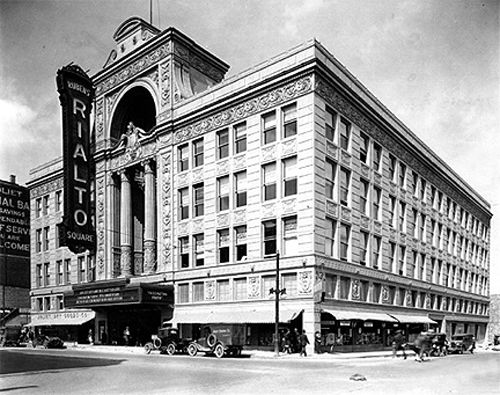 The historic Rialto Theatre in Joliet, IL, about the time of its opening.

The historic Rialto Square Theatre in Joliet, Illinois, not only hosts hundreds of entertainment patrons, but also a couple of resident ghosts.

The theatre began its life as a vaudeville movie palace in 1926 when the six Rubens brothers formed the Royal Theatre Company and desired to build a “Palace for the people.” Designed by the Rapp & Rapp Architect firm of Chicago, the opulent theatre, reflecting Italian Renaissance, Greek, Roman, Byzantine, Rococo, Venetian and Baroque architecture, cost nearly two million dollars to build – a staggering amount at the time. After two years of construction, the theatre opened on May 24, 1926.

The day before its grand premiere, the Joliet Herald News described it:

“When the doors of the new Rialto open tomorrow, Joliet will have one of the finest theaters in the United States, as experts say there is nothing to compare with it in any city of similar size, and it stands on even terms with the modern motion picture palaces of Chicago and New York.”

The Royal Theatre Company leased the operation of the theatre to Great States Theatre, Inc; however, the property itself remained under the control and direction of the Rubens brothers. 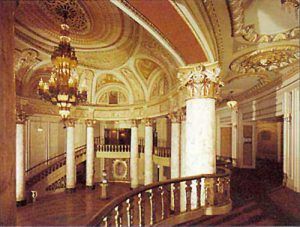 On its opening night, theatre-goers paid 50 cents to see the silent movie “Mademoiselle Modiste.” As they entered, they were amazed as they viewed the inner lobby, styled after the Hall of Mirrors in the Palace of Versailles and the dome in the rotunda, reminiscent of the Pantheon in Rome, with one of the largest, hand-cut crystal chandeliers in the country. The arch between the esplanade and rotunda area was carefully copied from the Arc de Triomphe in Paris.

Throughout the theatre were displayed numerous sculptures, art, elaborate drapes, and furnishings, and for its patrons’ comfort, was fully air-conditioned. The theatre opened to grand applause and for decades entertained the public with vaudeville and stage productions, musical and comedic entertainers, ballet and opera, and served as a “movie house” during the “Golden Age” of films. Over the years, it hosted such names as Andy Williams, Mitzi Gaynor, Red Skelton, Victor Borge, Liberace, and hundreds of others. Interestingly, the Rialto was also one of Al Capone’s favorite haunts. 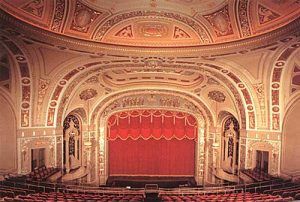 However, time and weather took their toll on the magnificent theatre and by the mid-1970’s it was facing possible demolition. Thankfully, it was rescued by a grass-roots campaign by the Rialto Square Arts Association, now called the Cultural Arts Council of the Joliet Area. With the assistance of local business people, funds were sought from the city, state, and federal officials, and soon the majestic theatre was undergoing restoration.

Actual work began in April of 1980, and by the following year, the Palace for the People” was restored to its former glory, reopening as the Performing Arts Center.

Listed on the National Register of Historic Places, and now considered one of the top 10 theatres in the country, the Rialto Square Theatre continues to host plays, concerts, and other talent, as well as being called home to the Rialto School of the Arts, and hosting numerous events and meetings. 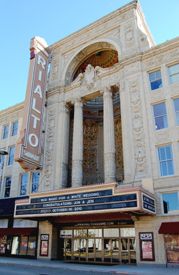 The Rialto Theatre in Joliet. Photo by Kathy Weiser-Alexander, 2010. Click for prints & products.

The “Jewel of Joliet” not only continues to host hundreds of customers but it also is called home to a couple of resident ghosts. The most often spied is a nameless spectral woman who is thought to have been an actress who performed at the theatre many years ago. She is described as being in her twenties, very pretty, sometimes surrounded by hazy light, and thought to have been a well-known performer of her time. She has been reported to have been seen floating around the theatre by staff, customers, and workmen, becoming especially active during the period of time that it was closed to the public. Many believe that she so loved performing there that she’s just not ready to leave this world.

Two more spirits, one male and one female, are sometimes spied in the auditorium’s balcony. According to the legend, the pair fell to their deaths from the balcony, and like others who have died in tragic accidents, they just won’t move on.

Other reports include sudden periods of icy coldness, strange noises, objects that seemingly move of their own accord, and the feeling that they have been “jabbed” by an unseen finger.