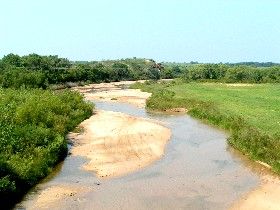 In 1894, the First National Bank in Bowie, Texas, was robbed by four men. After escaping with the $28,000 in stolen loot, they headed north, stopping after a long day’s ride on the south bank of the flooded Red River on the Texas – Oklahoma border. In the meantime, Lewis Palmore, a U.S. Deputy Marshal in Indian Territory, received a telegram from the Bowie City Marshal that the bandits were headed his way.

Realizing that the thieves would have to cross the flooded Red River at Rock Crossing, he made preparations for a posse to be waiting the next morning.  When the robbers started their departure the next day, they spied a posse quickly approaching from the south and plunged into the river, swimming beside their horses. Little did they realize that they were swimming directly into the hands of yet another posse waiting for them on the other side of the river. Along with two deputies, Palmore quickly arrested the four men, finding in their saddlebags some $18,000 in paper money. However, also taken from the bank was $10,000 in $20 gold pieces. Of these, not a single one was found.

The outlaws were then taken to Fort Smith, Arkansas, where they were sentenced to hang by Judge Isaac Parker. U.S. Deputy Marshal Palmore was there for the execution, and as one of the robbers waited for his execution, he told the lawman that they had hidden the gold coins near their final campsite on the south bank of the Red River.  On his return to Oklahoma, Palmore searched the area repeatedly looking for the gold coins but was never able to find them. Later, he told the tale to his son, who also searched the site with a metal detector.  Though Frank had the advantage of advanced technology to help him in his search, he, too was unsuccessful.

The cache is said to be buried somewhere between the bridge on Highway 81 and the mouth of the Little Wichita River.