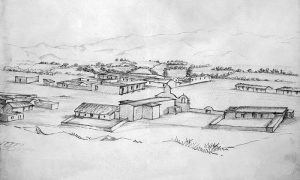 Many years ago, worn out with the activity of life in the Nevada mining camps, my doctor recommended a trip to southern California. It was long before the “boom,” and Los Angeles was a sleepy, Mexican town. Its old Sonora town with its adobe houses and tile roofs, and the dark-eyed Senoras with their picturesque costumes, was charming but thoroughly Mexican. It was before the advent of railroads, and the favorite route for reaching there was by steamer from San Francisco. At that place, a comrade joined me, who was searching for new fields for business; but he was timid about ocean travel and only consented to the ocean route after some urging. Preparations were hurried to catch the steamer, but his fears were so great that he neglected some matters, to make his will before sailing, as he had no faith in escaping the perils of the deep.

I joked with him on his timidity while admiring his grit in deliberately facing what he sincerely believed was sure death. The voyage was uneventful to Santa Barbara, where we disembarked and awaited the next steamer to Los Angeles. The interim was spent in viewing the sights of that old mission town that was just then awakening from the sleepy lethargy of placid existence of a century, and the transition, then taking place, was fascinating to anyone that was a close observer. Four days were passed pleasantly and on the fifth, the old steamer Orizaba, from San Francisco southbound, moored to the wharf, discharged cargo during the day, and in the evening left port in a dense fog. We were promptly on board but found a crowded ship and were compelled to accept any accommodations offered. A mattress on the saloon deck or at best on a locker was all that could be promised, and so we wandered over the ship like tramps, homeless, but at home everywhere. 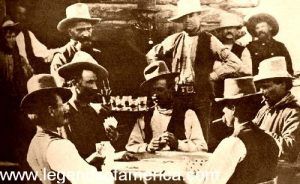 As the ship steamed down the channel, the fog thickened, the speed was slackened, and the fog whistle sounded its doleful but startling warnings with distressing regularity every minute. My friend was seriously alarmed and questioned everyone upon the prospects. The night was black — one could not see across the ship’s deck. A heavy swell caused the vessel to plunge as though going to the bottom, and when the whistle sounded its muffled shriek, as the vessel plunged downward, it seemed like the last goodbye. My friend was so seriously alarmed that his actions were painful to witness. He clung to me like a child, and I could not compose him. Some others showed fright, and that made him hopeless of ever reaching terra firma. I tried to quiet his nerves from a private flask, but his stomach was worse disturbed than his nerves, and his sick grimace at the smell of the contents punctuated his refusal with a positiveness that was unanswerable. The cigar case met the same refusal. He would not sit down nor go to bed, and he couldn’t stand up without holding on to something, and so he clung to me like a frightened child. His distress was pitiful, and yet I hadn’t the courage to cuss him. I was at my wit’s end when stumbling with him into the upper saloon; a reckless young drummer challenged anyone for a game of draw poker. I accepted promptly, in hopes of diverting my friend from contemplating a watery grave, and soon I was raking in the drummer’s coin, for he played recklessly and out of luck. The stack in front of me grew to respectable proportions. My friend became absorbed in the game and forgot the fog whistle. Then, luck turned, and slowly my accumulations drifted across the table. The drummer got even and proposed larger stakes, to which I demurred, and the game closed. The fog had raised a little; the whistle had ceased its doleful warnings; the machinery was working rapidly, and the vessel was increasing its speed.

My friend had forgotten his fright and was composed for a good night’s rest by the excitement of the poker game, and I was forced to the conclusion that in this instance, at least, poker was more efficacious than prayer.

By William Daugherty, for the Reno Evening Gazette, June 27, 1891. Compiled and edited by Kathy Weiser/Legends of America, updated January 2021.