The Piro Indians were once one of the principal Pueblo tribes of New Mexico, which, in the early part of the 17th century, comprised two divisions, one inhabiting the Rio Grande Valley in Socorro County, New Mexico, northward to within about 50 miles of Albuquerque, where the Tigua settlements began. The other division, sometimes called Tompiro and Salinero, occupied an area east of the Rio Grande in the vicinity of the salt lagoons, or salinas, where they adjoined the eastern group of Tigua settlements on the south.

The western or Rio Grande branch of the tribe was visited by members of Francisco Vasquez de Coronado’s expedition in 1540, by the Chamuscado and Rodríguez Expedition in 1580, by Antonio de Espejo in 1583, who found them in 10 villages along the river and others nearby; by Juan de Onate in 1598, and by the Franciscan missionary, Alonso de Benavides in 1621-30, who stated that they were in 14 pueblos along the river.

The establishment of missions among the Piro began in 1626 when the most southern churches and monasteries were built in southern New Mexico. In 1630, the Piro were estimated to have numbered 6,000 people but were being seriously harassed by the Apache. The 14 villages along the Rio Grande occupied by the Piro in 1630 were reduced to only four, half a century later. 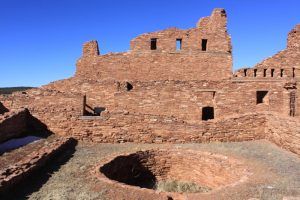 Abo Mission and Kiva by the National Park Service

The area occupied by the Piro of the Salinas extended from the Pueblo of Abo southeast to and including the pueblo of Tabira, commonly called “Gran Quivira,” a distance of about 25 miles. The habitat of the eastern Piro was even more desert than that of the eastern Tigua, which bounded it on the north, for the Arroyo de Abo, on which Abo pueblo was situated.

The first actual missions among the Piro pueblos of the Salinas were established in 1629 by Francisco de Acevedo at Abo and Tabira, and probably also at a place called Tenabo, but before the massive-walled churches and monasteries were completed, the village dwellers of both the Salinas and the Rio Grande suffered so seriously from the depredations of the Apache, that their villages were deserted before the Pueblo Revolt of 1680. Salinas Pueblo Missions National Monument now protects the ruins of these early missions near Mountainair, New Mexico.

The Piro people did not revolt against the Spanish in the uprising. Consequently, when Governor Antonio de Otermin retreated from Santa Fe to the area of present-day El Paso, Texas, many of the Piro people followed, while others scattered and joined other Pueblo groups. Soon, new villages were established by the Spanish for the refugees in present-day Texas, including Ysleta Sur in El Paso, Mission Nuestra Señora de la Limpia Concepción, in Socorro, and another in San Elizario. None of the Piro pueblos was ever resettled by the original inhabitants.

By the mid-1800s, many Native Americans living in the El Paso area began to migrate back to New Mexico, settling in the present-day Las Cruces area. By 1885, about 80 Pueblo Indian families lived in the area, many of whom were of the Piro tribe. However, by the early 1900s, only about 60 Piro people were known to have survived, and its language is extinct.

Today, however, the Piro/Manso/Tiwa Indian Tribe of the Pueblo of San Juan de Guadalupe in Las Cruces, New Mexico, is working to gain federal recognition.