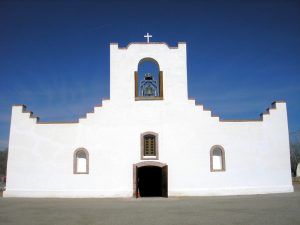 The Socorro Mission, or Mission Nuestra Señora de la Limpia Concepción (Our Lady of the Immaculate Conception), is located along the Rio Grande in Socorro, Texas, southeast of El Paso.

The original Franciscan mission was founded in 1682 by the Franciscan order to serve Pueblo Indian refugees, including the Piro, Tano, and Jemez, who fled from present-day New Mexico after the Pueblo Revolt of 1680. The revolt successfully drove the Spanish colonists and their native allies from the region. The Spanish governor, Antonio de Otermín, along with Fray Francisco Ayeta, established the mission along the south side of the Rio Grande in present-day Mexico, several miles southeast of the Ysleta Mission.

Socorro del Sur (Socorro of the South) was founded the next day after Ysleta, and a temporary shelter served as its first church. This was the beginning of the Socorro community, which is considered the second oldest community in Texas.

This first village was short-lived, as, in 1683, an uprising by the nearby Manso Indians prompted officials to move the community closer to Ysleta. The location of this first mission has not been identified. The second mission was occupied from 1684 until about 1740, and a third from about 1740 until 1795, when the fourth mission was constructed. In 1829, a devastating flood changed the course of the Rio Grande, destroying both the fourth mission and the nearby Socorro Pueblo. This flood changed the river’s course, placing Socorro, Ysleta, and neighboring San Elizario on the north side of the Rio Grande, which would become part of the United States. 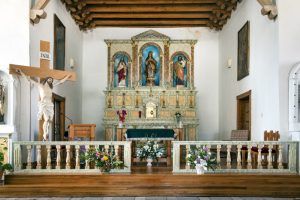 Construction of the present Socorro mission began in about 1840 with the reused the roof support beams and furnishings of the previous mission. It was completed in 1843. The mission, constructed of adobe surfaced with stucco, is particularly notable for its interior. The finely painted and decorated beams, or vigas, are from the 18th-century mission and were reused when the present church was constructed. Inside are a choir balcony and a statue of St. Michael, the community’s patron saint, carved early in the 1800s. Legend has it that in 1838 the statue was being moved from Mexico to a church in northern New Mexico on an ox cart when the wagon bogged down on the site of the Socorro Mission and couldn’t be moved. The people believed that this was a sign from St. Michael that he wanted a shrine constructed in his honor. The massing, details, and use of decorative elements of the Socorro Mission show strong relationships to the building traditions of 17th-century Spanish New Mexico. Today, weathered wooden crosses and marble headstones punctuate the cemetery that fronts the gracefully stepped facade of the Socorro Mission.

Meanwhile, Mexico’s 1821 takeover of Spanish lands caused a significant political change. Further change came with the U.S. defeat of Mexico in 1848. With the signing of the Treaty of Guadalupe Hidalgo, Socorro del Sur became a part of Texas. The Piro Indians were now assimilated into a growing American and largely Hispano community that attracted some Eastern-American settlers. The community included farmers known for their impressive orchards and vineyards and freighters and traders doing business on El Camino Real, then commonly called the Chihuahua Trail. 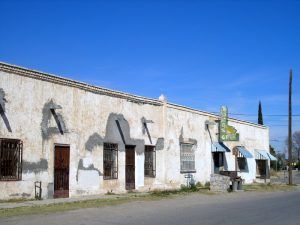 An old building in Socorro, Texas by Kathy Weiser-Alexander

The mission is located on the southern segment of the El Camino Real de Tierra Adentro (Royal Road of the Interior), locally known as the Mission Trail. This nine-mile section of El Camino Real is situated along Socorro Road (FM 258).

It is listed in the National Register of Historic Places, is a Texas State Landmark, and a “living” mission that continues to be an active Roman Catholic parish church serving the local community. It is located at 328 S. Nevarez Road in Socorro, Texas, about 20 minutes southeast of El Paso. It is open to the public Monday through Friday.

In September, hundreds of people come together during the mission’s annual festival to celebrate the church and its special patron saint, Saint Michael. 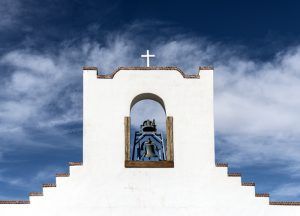