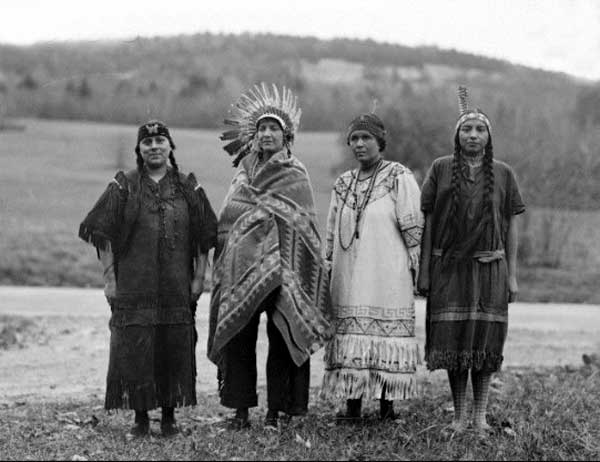 The Penobscot are an indigenous tribe from the Northeastern Woodlands region that is federally recognized in the state of Maine as well as in Quebec, Canada.

Their name originates from a mispronunciation of the name they call themselves — Penawapskewi, which means “rocky part” or “descending ledges”. The term originally referred to their territory along the Penobscot River that runs from their sacred mountain to the north, Katahdin (Greatest Mountain), down through the state to Penobscot Bay. It was along this river that they made seasonal relocations to the ocean for seafood, and then back inland for moose, deer, and bear hunting, as weather dictated. In addition to living in Maine, their original territory covered areas in New Brunswick and Nova Scotia, Canada. They are thought to have inhabited their territory for at least 11,000 years before explorers and settlers arrived.

They are part of the Wabanaki Confederacy, along with the Mi’kmaq, Maliseet, Passamaquoddy, and Abenaki tribes, all of whom historically spoke Algonquian languages. The Penobscot were peaceful but joined the confederacy to defend themselves against attack by the powerful Iroquois.

Like other Algonquian peoples, lived in wigwams covered with the bark of birch trees and were a hunting and gathering society. The men hunted beaver, otters, moose, bears, caribou, and birds and fished in the rivers and the ocean. The women gathered and bird eggs, berries, nuts, roots, and sap from maple trees. They also practiced some limited agriculture, particularly maize around their villages. 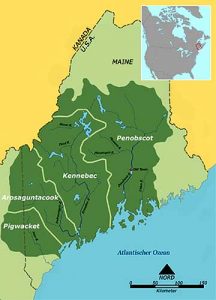 Bands moved seasonally, following the patterns of game and fish. They traveled in the winter from their villages to hunt in the forests. They used birch bark canoes and snowshoes when traveling, and utilized toboggans to drag back their game.

The Penobscot social structure consisted of loose groupings of villages, each with their own chief, who was often also a shaman. Originally, they are thought to have numbered over 10,000, but wars with the Mohawk, conflicts with European settlers, and diseases such as smallpox introduced by the Europeans, decimated their population.

The first European known to have visited them was probably the Portuguese Estêvão Gomes in 1524, who was working for Spain. He was followed by the French explorer Samuel de Champlain in 1605, who was looking for the mythical city of Norumbega, thought to have been in the vicinity of present-day Bangor, Maine. More people began to interact with the tribe during the fur trade and the Penobscot were willing to trade pelts for European goods such as metal axes, guns, and copper or iron cookware. At some point, French missionary priests settled among the Penobscot and the tribe adopted Christian teachings.

But, the Europeans introduced two more things to the tribe – alcohol and infectious diseases, both of which would take their toll on the tribe. Their fatality rates from the introduction of diseases was high and the population declined. Their numbers were also reduced due to fighting between the Wabanaki Confederacy and the powerful Mohawk people of the Iroquois League, which struggled to control the fur trade. 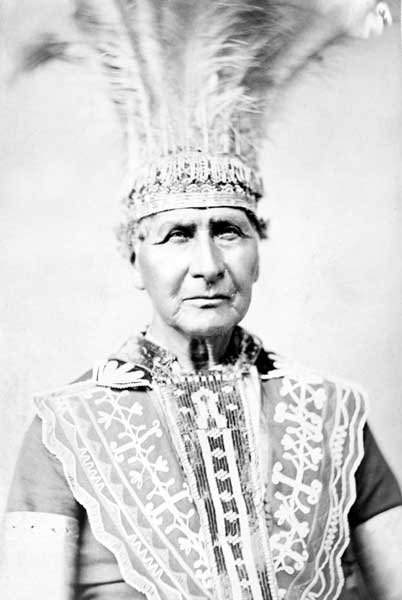 By the beginning of the 17th century, Europeans began to live year-round in Wabanaki territory. During this time, their territory became a hotly contested borderland between the English of colonial New England and French Acadia. Members of the Wabanaki Confederacy, siding with the French, participated in several wars until they were defeated by the British in the French and Indian War in the mid-18th century. During these years, their numbers were drastically reduced by European-borne diseases and their lifestyle was severely threatened by the Europeans who took over their traditional hunting grounds and over-fished the rivers. 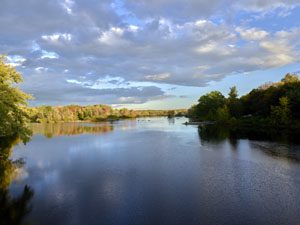 During the American Revolution, the Penobscot sided with the Patriots and played an important role in defending against British offensives from Canada. Anglo-American settlers continued to encroach on Penobscot lands and though the tribe attempted to make treaties in order to hold on to some of their lands, they were unsuccessful.

From about 1800 onward, the Penobscot lived on reservations, specifically, Indian Island, which is an island in the Penobscot River near Old Town, Maine. By this time, their numbers had been reduced to only about 500 people.

In the 1970s, the Penobscot Nation sued the state of Maine for land claims, calling for some sort of compensation in the form of land and money. The tribe and the state reached a settlement in 1980 of $81.5 million, with which the Penobscot Nation bought back a portion of their ancestral lands. Their headquarters are located in Indian Island, Maine along the Penobscot River between present-day Old Town and Bangor, Maine.

Today, the tribe has about 2,400 enrolled members. The last known Penobscot speaker of Eastern Abenaki died in the 1990s. However, a dictionary was compiled and today, schools are making an effort to reintroduce the language by teaching it to the children.

For generations, the Penobscot have made beautiful finely woven baskets, a tradition that continues today.

Katahdin, Maine, a sacred mountain of the Penobscot, courtesy Wikipedia.