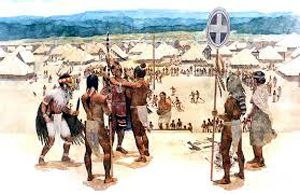 The Pascagoula were a small tribe of Indians formerly living on the Pascagoula River in southern Mississippi. They were closely connected with the Biloxi but are now extinct as a separate division.

Their name was derived from the Choctaw, who called them the “bread people.” They were first documented by Canadian naval officer Jean-Baptiste Le Moyne, Sieur de Bienville, who,  along with his older brother, explored the Mississippi River Valley in 1699. At that time, the Indians lived near the Pascagoula River but later moved to the Gulf Coast.

In 1764 the Pascagoula and the Biloxi left the Gulf Coast area and were reported living on the east side of the Mississippi River about 10 miles above the Tunica River. Sometime before 1791, they moved up the Red River into Louisiana and, by 1795, had settled near the Biloxi River. Their numbers declined over the years, and those who were left probably joined with the Biloxi and Choctaw tribes.