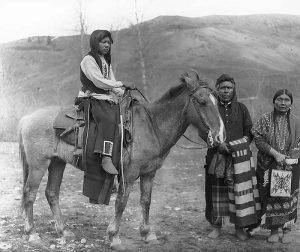 The Palouse or Palus people lived along the Palouse River in eastern Washington, northeast Oregon, and north-central Idaho. They were culturally related to the Nez Perce tribe.

When Lewis and Clark encountered them in October 1805, they called them “Pallotepellows” and estimated their number at around 1,600. The Palouse people were semi-sedentary hunter/gatherers. Acquiring horses early on, they became expert horsemen, breeders, and horse traders. With its distinctive spotted coat, speed, and stamina, the Appaloosa horse takes its name from the tribe. Like other tribes on the Columbia Plateau, they also depended heavily on fishing in the region’s many rivers.

Though they initially traded with white fur traders and settlers, they soon came into conflict with them as the Palouse people suffered from diseases. In 1847, after a measles epidemic, they fought with the Cayuse in the Cayuse War. In 1855, they were recognized in the Treaty with the Yakama, but the tribe never recognized the treaty, and they refused to lead the reservation life. However, when that treaty was immediately broken, they joined forces with the Yakama and other tribes in the Yakima War in 1855 and the Coeur d’Alene War of 1858. Some individuals eventually joined reservations. Today’s descendants are called “Palouse” by the Yakama Nation and “Palus” by the Colville Confederated Tribes.