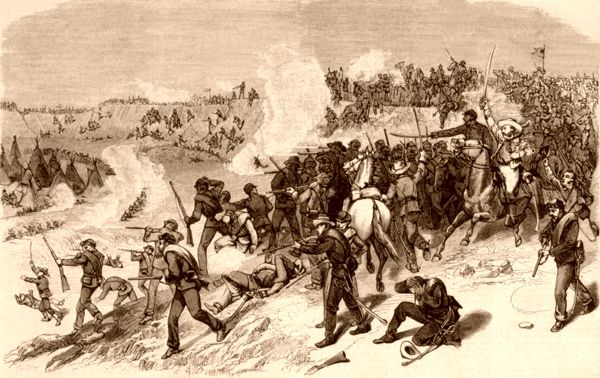 In 1855 Chief Joseph’s father, Old Joseph, signed a treaty with the U.S. that allowed his people to retain much of their traditional lands. However, less than ten years later, in 1863, a second treaty severely reduced the Nez Perce lands, taking seven million acres from them as white settlers continued to move westward. Left with only 138,000 acres, Old Joseph maintained throughout his lifetime that his people never agreed to this second treaty. 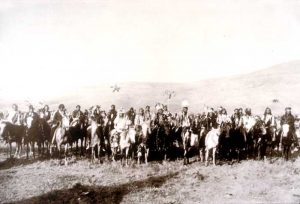 Throughout the summer and early fall of 1877, the fighting skill of the Nez Perce warriors and the military tactics of Nez Perce military leaders, such as Chief Looking Glass and Chief White Bird, enabled the Nez Perce to evade almost certain defeat by superior U.S. Army forces. The Nez Perce strength during the 1877 war was estimated to be a few hundred warriors who had no formal military training and traveled with many non-combatants. The Army, however, would use several thousand soldiers during the 1877 Nez Perce campaign. These were commanded by veterans of the Civil War with years of military training and experience.

The Nez Perce and the Army would engage several times as the Nez Perce traveled from their homeland in the Wallowa Valley through the Idaho and Montana Territories towards their goal of Canada. By October 1877, however, approaching winter weather, lack of supplies, and the effects of traveling more than 1,500 miles over rough western territory had begun to take their toll.

The last engagement between the Nez Perce and the Army was fought at Bear Paw Mountain in Montana Territory. This battle took place between September 30 and October 5, 1877. After Bear Paw Mountain, when continuing to fight seemed futile, Chief Joseph surrendered his remaining forces to General Nelson A. Miles and General Oliver Otis Howard. 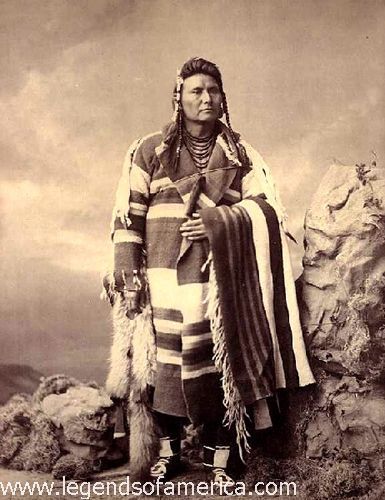 In his surrender speech, Chief Joseph concluded with:

“I am tired. My heart is sick and sad. From where the sun now stands, I will fight no more forever.”

Captains Edward S. Godfrey and Myles Moylan would be awarded the Medal of Honor for their actions against the Nez Perce at Bear Paw Mountain.

The Nez Perce War would not be the last conflict where the decisions and promises of battlefield commanders would be influenced by higher political forces and a physically distant command structure.