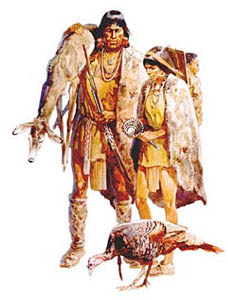 These ancient Indians constructed this large planned community over 1,000 years ago. At that time, the ancestral pueblo people began planning and constructing the pueblo, which was close to the Animas River, where early farmers could take advantage of the constant water supply.

Its access to the river provided the people with a reliable food source, as they could plant crops. Built on and below a terrace overlooking the river, the pueblo would ultimately have many large and small public structures, earthworks, ceremonial buildings, residential pueblos, and roads.

This extensive community likely served as a trade, ceremonial, and administrative center for many of the scattered communities associated with Chaco Canyon. The Chaco culture exhibited great influence over much of this part of New Mexico between 850 A.D. and 1130 A.D. This influence, including its architectural, ceramic, and ceremonial styles, strongly influenced Aztec’s early inhabitants and initial builders.

Aztec was a bustling community for over two centuries, and its planned layout reveals that the initial ancestral Pueblo builders conceived a grand design for their community. When the building ceased in the late 1200s, the community consisted of several great houses, great kivas, small residential pueblos, earthworks, roads, and tri-walled kivas. The structures and landscapes were all constructed and modified to give continuity and formality to the community’s overall essence. The builders used local adobe mud for the structures’ walls. They used cottonwood, pinyon pine, juniper, pine, spruce, Douglas fir, and aspen, which they obtained from mountains many miles away for roofing. 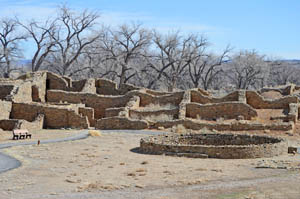 By 1100 AD, the Aztec Ruins community may have become a center in its own right when Chaco’s regional influence began to fade. By about 1300 A.D., these people left this region and dispersed to the south in various directions. After serving their society for over two centuries, a combination of drought, climate changes, depletion of natural resources, and social changes likely influenced the ancestral Puebloans’ decision to leave their well-planned community.

The ruins were named when 19th-century American settlers misattributed their construction to the Aztecs of Mexico. The first actual description of the Aztec Ruins was made by the geologist J. S. Newberry, who saw the site in August 1859. Lewis H. Morgan published the first ground plan and a further description from his visit of July 1879. From then on, little consequence appeared until archeologist Earl H. Morris began systematic excavations in the West Ruin in 1916. Morris spent six field seasons in the excavation of the West Ruin between 1919 and 1928. 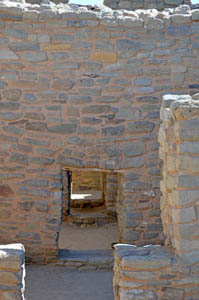 Doors at the Aztec Ruins National Monument by Dave Alexander.

In 1920 the American Museum of Natural History purchased the major ruins and deeded them to the United States. The area was proclaimed a National Monument in January 1923.

Excavation of the site revealed artifacts such as food remains, stone and wood tools, cotton and feather clothing, fiber sandals, and jewelry made of turquoise and shells.

The great houses within the West and East Ruins are large public buildings with many connected rooms surrounding a central plaza. The largest preserved structure is the West Ruin, a D-shaped great house constructed in the early 1100s. With at least 400 interconnected rooms of three stories, the site was occupied for over 200 years. Some of its walls reach 30 feet. Also of note is the excavated and reconstructed Great Kiva, situated in the center of West Ruin’s plaza. Ancestral Pueblos used the Great Kiva for community-wide ceremonial events. Over 40 feet in diameter, the semi-subterranean structure is the oldest and largest reconstructed building of its kind.

The Hubbard Site, dating from the early 1100s and one of only a handful of tri-walled structures in the Southwest, has three concentric walls divided into 22 rooms, with a kiva. It was rebuilt in 1934 by Earl Morris, an archeologist for the American Museum of Natural History.

A half-mile self-guided visitor trail through Aztec Ruins winds through an ancestral Pueblo great house that was once the center of a large regional community. It also leads visitors through the reconstructed great kiva and original rooms with timber roofs still intact and original mortar in some walls. 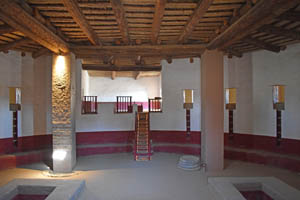 Even the visitor center is listed on the National Register of Historic Places. This building originally served as a residence and workspace for Earl Morris in 1919. Later, a large public lobby/museum space was added to the west. The Aztec Ruins Administration Building is a one-story, irregularly shaped building that currently reflects the Pueblo Revival style. When it was originally built, it incorporated not only aboriginal construction strategies and design features but also fieldstone and timbers cut and harvested by the prehistoric builders and occupants of Aztec Ruins.

Part of the Chaco Culture National Historical Park World Heritage Site, the Aztec Ruins National Monument is the largest ancestral Pueblo in the Animas River Valley. The monument was listed on the National Register of Historic Places in October 1966.

Located on the Trail of the Ancients Scenic Byway, the monument is one mile north of Aztec, New Mexico, near U.S. 550 and NM 516. 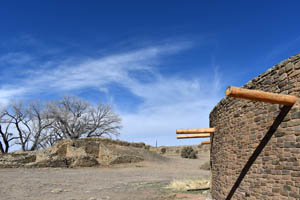