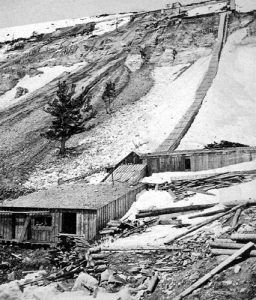 In the 1870s, four mining camps got their start in the Hecla Mining District on the side of Lion Mountain. Also referred to as the Glendale and/or Bryant Mining District, which was strung out along ten miles of gulches, the four towns included Trapper City, Lion City, Glendale, and Hecla. One of the last districts to be established in the Pioneer Mountains, it was also one of the richest, producing silver, lead, copper and zinc ore valued at nearly $20 million over the years.

The first claim in the area was made in 1872 by two men named William “Billy” Spurr and James Bryant and called the Forest Queen. However, Spurr recorded the claim in his own name, but never worked it. The following year, James Bryant returned to the area with several other men and began looking in the area for other potential claims.

During this excursion, a silver outcropping was found that was called the Trapper Lode.  After staking their claim in Bannack, Montana, the men began to work the mine taking both silver and lead out by pack train and wagons to be loaded at the railroad at Corinne, Utah and sent to Denver for smelting.

Word quickly spread and before long the area was filled with a number of prospectors from Bannack. More lodes were soon discovered and the Cleve and Avon Mines soon were being worked. The first mining camp to be established was Trapper City, which established a post office in 1873. Soon, the camp also boasted a hotel, several saloons, a brothel, general store, butcher shop, livery stable, and numerous cabins lined up and down Trapper Creek. The settlement reached a population of nearly 200 but was short-lived, as mining began to move up onto Lion Mountain.

In 1875, a 40-ton smelter was built farther down Trapper Creek by two men by the names of Noah Armstrong and Charles Dahler. The camp of mill workers that grew up around it was named Glendale and a post office was opened the same year.  Numerous employees and their families soon made their home in Glendale, the tamest and most civilized of the four mining camps in the district.  The new town also sported “The Montana Brewery”, owned by John Mannheim, who had formerly operated the brewery at Bannack. A general merchandise store was owned by Noah Armstrong.

Two years after building the smelter, Noah Armstrong, along with investors from the east, would form the Hecla Consolidated Mining Company, buying out the original claimants of the Trapper Lode and began to aggressively develop the organization. The mining company was after a painting that had been hanging in the company’s payroll office which depicted Mt. Hecla, a volcano found on the Icelandic Continent. Soon, the new mining organization began buying up most of the workings on Lion Mountain, including the Cleopatra, Trapper, Franklin, Cleve-Avon, Mark Anthony, Ariadne, True Fissure, and Atlantus lodes. By 1878, Glendale had grown to almost 1000 residents.

Also growing was the new camp of Lion City, at the base of Lion Mountain and by 1878, almost everyone had abandoned Trapper City and moved to Lion City or Glendale. Trapper City’s businesses also moved, and Lion City soon boasted three saloons, two brothels, two hotels, several businesses, a school, mining buildings, numerous cabins, and about 600 people.

In the meantime, the Glendale smelter was busy producing about one million ounces of silver and thousands of tons of lead and copper annually until it burned down in July 1879. That same year, Noah Armstrong was replaced by Elias C. Atkins, as the Hecla Consolidated Mining Company’s General Manager. However, the company was not faring as well as its investors would like, and he too was replaced in April 1881 by Henry Knippenberg. The new general manager quickly set about reorganizing the company, splitting it into three divisions and appointing a superintendent for each. By the end of the year, the company was profitable once again. In the meantime, the Glendale Smelter was rebuilt, enlarged, and placed back into operation. 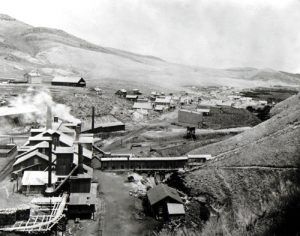 New manager Henry Knippenberg also made his home in Glendale, building a mansion for his family that looked over the townsite. Glendale continued to grow, boasting numerous businesses, hotels, four saloons, a newspaper called The Atlantis, restaurants, a school, an opera house, church, hospital, and one of the largest skating rinks in the state. The town peaked at about 2000 people during the early 1880s.

About this same time, Knippenberg also created the company town of Hecla about a mile away from Lion City, primarily to remove the miners from the many bawdy opportunities available in Lion City. Building boarding houses for the miners and moving the company mine offices to the new site provided easier access to the mines as well as improving the morals of the miners.

In 1882, Knippenberg added the Greenwood Concentrator halfway down the mountain and laid four miles of narrow-gauge tramway to move the ore from Hecla to the mill. The mine operations also continued to expand and by 1885, the plant consisted of three blast furnaces, two crushers, a large roaster, two powder houses, warehouses, and numerous other mine buildings.

Unfortunately, the Hecla Mining District, like many others, was hard hit when the Sherman Silver Purchase Act was repealed in 1893. Though operations continued on a smaller scale, the ore was dramatically played out by the turn of the century. The company’s major producing mine, the Cleopatra shut down in 1895 and in 1900 the Glendale Smelter was torn down. Only the Atlantis and Cleve Mines continued to operate but by 1904, all operations of the Hecla Consolidated Mining Company ceased. 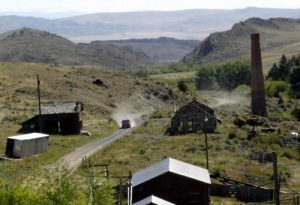 But, for Henry Knippenberg, he was not convinced that the district’s heydays were completely over and that same year, he bought the operations at a sheriff’s sale. Knippenberg then leased the properties to the Penobscot Mining Company, who continued to mine the area for several years. Finally, in 1915, the mines closed forever, but still more ore was to be worked in the old slag piles, which continued until 1922.

For the next several decades, the property changed hands numerous times, as new developers attempted to work the old mines and tailings. Though small amounts of ores were recovered, these ventures were unprofitable.

Though its prosperous times were finally over, and its mining camps abandoned, the Hecla Consolidated Mining Company was one of the more successful, paying dividends to its investors for more than two decades.

Today, all signs of Trapper City are long gone but Glendale continues to display the smelter stack, the remains of the old stone office building, and a few old buildings. Lion City and Hecla also sport just a few remaining buildings and mining remains. The old charcoal kilns can also be seen about five miles beyond Glendale on Canyon Creek Road.

The district can be reached from I-15 near Melrose at Exit 93 on Trapper Creek Road. Glendale is about five miles and Lion City and Hecla, another 7 miles or so.  A four-wheel drive or ATV is recommended. 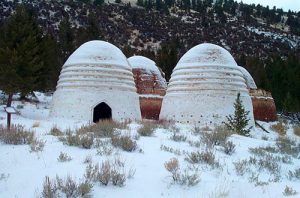