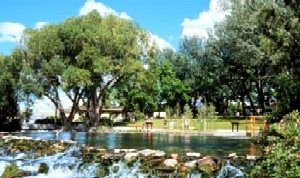 The largest snowflake ever observed was 38 cm wide was recorded in Montana on January 28, 1887. That’s just darn near 15 inches. Amazing!

Giant Springs, Montana is home to the largest freshwater spring in the U.S.

In Helena, Montana it is illegal to throw an item across a street.

It is illegal to have a sheep in the cab of your truck without a chaperone.

The selection of Helena as the capital of Montana had an inauspicious beginning. A political war between two “Copper Kings” Marcus Daly and William Clark, resulted in massive bribery and vote-buying scandals only a “Copper King” could afford. With Daly backing Anaconda and Clark supporting Helena, it is estimated that in 1894 each man spent almost $3 million to determine which city would become Montana’s new capital.

Montana has the largest migratory elk herd in the nation.

At the Rocky Mountain Front Eagle Migration Area west of Great Falls more golden eagles have been seen in a single day than anywhere else in the country.

The Roe River is recognized by the Guinness Book of World Records as the world’s shortest river. The Roe flows 200 feet between Giant Springs and the Missouri River near Great Falls. The Roe River competes with the D River in Lincoln City, Oregon for the title of the shortest river. Both rivers have been measured on different occasions, with lengths varying from 58 feet to 200 feet. Schoolchildren in Great Falls campaigned successfully to have the Roe River placed in the Guinness Book of World Records.

In 1888 Helena had more millionaires per capita than any other city in the world.

The Montana Yogo Sapphire is the only North American gem to be included in the Crown Jewels of England.

It is a misdemeanor to show movies that depict acts of a felonious crime.

46 out of Montana’s 56 counties are considered “frontier counties” with an average population of 6 or fewer people per square mile. 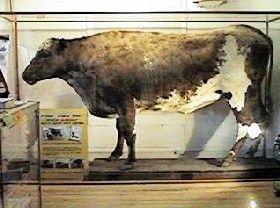 Steer Montana the largest steer in the world

The World’s Largest Steer can be found at Baker, Montana at the O’Fallon Museum.  Weighing in at 3,980 pounds, he grew to be 5’9″ tall and 10’4″ long. Born March 23, 1923, just east of Baker, Montana, the steer lived for 15 years and 4 months. Raised by Jack Guth, a former jockey, the steer toured local stock shows and circuses when he was alive. After he died, his hide was preserved. Steer Montana disappeared for many years, but was finally discovered in a storage facility in Billings and donated to the O’Fallon Museum.

At Bowdoin National Wildlife Refuge it is possible to see up to 1,700 nesting pelicans.

In Montana the word “spendy” means “expensive,” used in the same way the rest of us would use “pricey.”

The notorious outlaw, Henry Plummer, built the first jail constructed in the state at Bannack.

During the Wild West days in Billings, Montana, the cowboys and scarlet ladies of every saloon performed impossible dances atop bars, tables, and in some instances upon atop the pianos.

Every spring nearly 10,000 white pelicans with a wingspan of nine feet migrate from the Gulf of Mexico to Medicine Lake in northeastern Montana.

The “Going to the Sun Road” in Glacier Park is considered one of the most scenic drives in America. 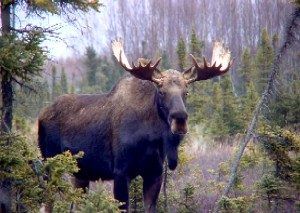 The moose, now numbering over 8,000 in Montana, was thought to be extinct in the Rockies south of Canada in the 1900s.

At Egg Mountain near Choteau, dinosaur eggs have been discovered supporting the theory some dinosaurs were more like mammals and birds than like reptiles.

In Whitehall, Montana it is illegal to operate a vehicle with ice picks attached to the wheels.

In 1884, the citizens of Montana Territory were fed up with lawlessness and forming a large-scale vigilante force, they executed thirty-five horse and cattle thieves that year.

The Continental Divide runs along the crests of the Rocky Mountains from Canada to Mexico, literally dividing the waters of the North American Continent. Montana is known as the headwaters state because much of the water which flows to the rest of the nation comes from the mountains of Montana.

No state has as many different species of mammals as Montana.

In Deer Lodge, Montana, in the Old West days, a cowboy evangelist angered over a snoring parishioner once fired a bullet over the head of the dozing man.

The Battle of the Little Bighorn also known as Custer’s Last Stand took place on June 25, 1876. Lieutenant Colonel Custer’s forces—including more than 200 of his men were wiped out in less than 20 minutes.

In Fort Benton, Montana a cowboy once insisted on riding his horse to his room in the Grand Union Hotel. When the manager objected, they exchanged gunfire. The horseman was killed before reaching the top of the stairs; fourteen .44 slugs were later dug out of his body.

Flathead Lake in northwest Montana contains over 200 square miles of water and 185 miles of shoreline. It is considered the largest natural freshwater lake in the west.

Miles City is known as the Cowboy Capitol.

Buffalo in the wild can still be viewed at the National Bison Range in Moiese, south of Flathead Lake and west of the Mission Mountains.

Three bandits who robbed the Adams Express car in a passenger train near Bannack, Montana were rounded up by vigilantes and promptly hanged, a fate that became all too familiar in the lawless West when citizens, angered over vacillating courts, meted out their own brand of swift and self-satisfying justice.

The most visited place in Montana is Glacier National Park, known as the crown jewel of the continent. It lies along Montana’s northern border and adjoins Waterton Lakes National Park in Canada, forming the world’s first International Peace Park. 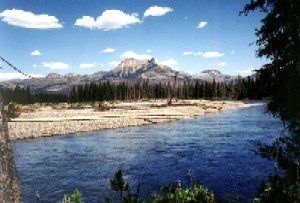 Yellowstone National Park in southern Montana and northern Wyoming was the first national park in the nation.

Montana has the largest grizzly bear population in the lower 48 states.

Montana mountain goats will butt heads so hard their hooves fall off.

Montana is nicknamed the Treasure State.

The highest point in the state is Granite Peak at 12,799 feet.

Virginia City was founded in 1863 and is considered to be the most complete original town of its kind in the United States.

In Montana, the elk, deer and antelope populations outnumber the humans.

Montana’s first territorial capital, Bannack, has been preserved as a ghost town state park along once gold-laden Grasshopper Creek. This old town is also said to be haunted by several ghostly spirits.

In Salisbury, Montana it is illegal to throw pop bottles on the ground.

The first inhabitants of Montana were the Plains Indians.

The state’s official animal is the grizzly bear.

Grasshopper Creek’s gold at Bannack, Montana was 99-99.5% pure, compared to most gold at 95%. When the strike was found in 1862 it led to the greatest rush to the West since the California Gold Rush in 1848.

Glacier National Park has 250 lakes within its boundaries.

A Helena, Montana law states that a woman cannot dance on a saloon table unless her clothing weighs more than three pounds, two ounces.