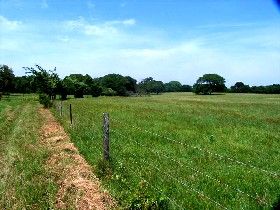 Brazos County – One can only imagine how dangerous the Old San Antonio Road, often referred to as the Old Spanish Trail, might have been in the early1800s. This road from San Antonio east to Nacogdoches was littered with dangerous Indians and Mexican bandits. On one occasion, these worst fears were realized when a pack train carrying gold and silver along the Old San Antonio Road was attacked. However, before the caravan was wiped out, they were able to unload and bury the gold and silver under a petrified log near Bryan, Texas. According to the tale, the treasure has never been recovered.

Brewer County – Gold bars were said to have been lost in Paisano Pass near the Brewster-Presidio county line. There is no record of it ever having been found. 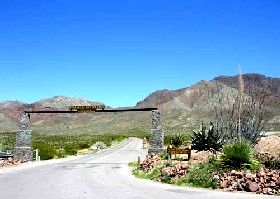 El Paso County – Shrouded in legend is the Lost Padre Mine, allegedly hidden in the Franklin Mountains. These peaks, overlooking the Rio Grande, make up the Paso del Norte (Pass of the North), leading from Mexico into the United States. Beginning in the 1580s Spanish conquistadors and priests often passed beneath the peaks of the Franklins on their mission to conquer and colonize the Puebloan villages in present-day New Mexico. One legend of the Lost Padre Mine says that some 300 burro loads of silver were left in the mine by Jesuits before they continued on their travels to New Mexico. Before they left, they filled in the shaft. Another version of the legend states that when King Philip II ordered Juan de Oñate to colonize the upper Rio Grande in 1595, he hid in the shaft 5,000 silver bars, 4,336 gold ingots, nine burro loads of jewels, and four priceless Aztec codices (books or manuscripts.) The Guadalupe Mission in El Paso, an adobe structure built between 1658 and 1668, is also involved in the legend, some saying that the shadows made by the mission point to the Lost Padre Mine.

Though many believe the treasure is hidden in the Franklin Mountains of El Paso County, another legend states that the Lost Padre Mine is not in Texas but in New Mexico. See HERE.

Leon Springs – About 2 ½ miles northeast of the old Soldiers Camp near Leon Springs, it is said to be a cave filled with small kegs, possibly filled with treasure or rich ore. The legend tells that a soldier found the location in 1916 while hunting, but when he returned, he could not find it again.

Mills County – In October 1858, Moses and Lydia Jackson, along with four of their seven children, set out from their cabin in the southeast section of Mills County to spend the day with friends. But the family would not make it to their friends. Instead, they came upon a group of Indians, most likely Comanche, and both adults and two of their children were killed near Jackson Springs. Two other children were abducted, only to be abandoned two weeks later. The children walked for two days before being recovered by a search party of settlers and Texas Rangers near Sweetwater.

Mr. and Mrs. Jackson and the two children killed by the Indians were buried where they fell. A Texas Historical marker now marks the spot in Mills County where state road 573 crosses the Pecan Bayou.

Almost immediately following the Jackson Massacre, a legend of buried gold began circulating. According to the tale, Moses Jackson had successfully sold several steers in the summer of 1858 and received gold in payment. His second-oldest son, Javan, who had not joined their family on their ill-fated trip, had overheard his parents talking about the gold. Moses Jackson poured the gold into a metal receptacle and disappeared outside, returning sometime later without the metal container. 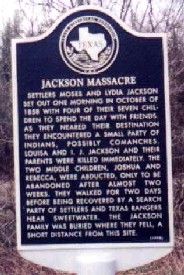 Presumably, Mr. Jackson buried it somewhere near his property. After the tragic death of his family members, the two remaining younger children were sent to live with their oldest brother, John Thomas Jackson, in Lampasas, Texas. Javan, who was old enough to care for himself, was said to have spent considerable time searching for the gold he was sure his father buried near their cabin.

Since that time, dozens of people have searched for Moses Jackson’s hidden cache, but if it has ever been found, no record of a claim has ever been made.

Palo Duro Canyon – Long the home to Indians and trailblazers and often utilized as a hideout for outlaws, legends of buried treasure have long been told to be hidden within Palo Duro Canyon. One such tale alleges that pioneers traveling through here long ago lost a cache of $20 gold coins that have never been found.

St. Joseph Island – In the early 1800’s Jean Laffite, the fabled privateer, was known to plunder Spanish and French ships in the Gulf of Mexico. However, he may not have known that St. Joseph Island, as well as much of the Texas coastline, was “ruled” by the Karankawa Indian Tribe. These natives, known as superb hunters, fishermen, and warriors, were also cannibalistic and powerful enemies to anyone they felt threatened their prime hunting grounds. One old treasure legend tells of how the pirate Keam Laffite disbanded his crew at the tip of St. Joseph’s Island, near Falso Live Oak Point, in 1821. There, the men were to hide the plundered treasure; however. as the legend is told, “Many men went into the woods bearing heavy treasure chests, but only one man came out.” In the meantime, Jean Laffite sailed away to continue his plundering.