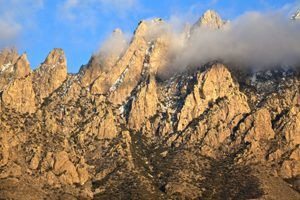 Organ Mountains in Southeast, New Mexico by the Bureau of Land Management.

Stationed at Chihuaha, New Mexico in 1797 during the last years of the Spanish occupation, was a priest named LaRue. Father LaRue, while sitting with an old dying soldier, listened while the man told him of a rich gold-bearing load in the mountains north of El Paso del Norte (El Paso, Texas today.)

The soldier explained to LaRue that the mother lode could be found by traveling one day north of El Paso until three small peaks could be seen.  When the peaks came into view, the journey would turn east across the desert to the mountains.  In the first mountain range, there would be a basin with a spring at the foot of a solitary peak. Upon this mountain was to be found a rich vein of gold.

Shortly after the soldier died, the Chihuaha settlement was devastated by drought and famine. The Padre called the villagers together asking if they would follow him north to a better climate and more water. They agreed and the party migrated to the north. After crossing El Paso del Norte, they followed the course of the Rio Grande to the small village of La Mesilla near Las Cruces, New Mexico. North of there, they sighted the three peaks and turned east across the dreaded Jornada del Muerto desert, finally arriving in the San Andreas Mountains. After a couple of days of exploration, they found a basin in which there was a spring at the base of a solitary peak, just as the old man had said. Settling the new colony at Spirit Springs in Dona Ana County, Larue sent the men out to search for the gold. On one side of the peak, they located a rich vein in a deep canyon southwest of the springs. They tunneled into the mountain and followed the vein downward. The deeper they went, the richer the ore became. The priest assigned dozens of monks and Indians to mine the gold, form it into ingots and stack it along one wall of a natural cavern inside the mountain. For two years LaRue extracted the gold from the mountain, stockpiling it. 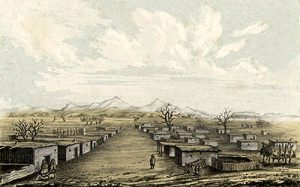 Word leaked into Mexico that LaRue had set up his own little empire and he was extracting large quantities of gold. The Spaniards wasted no time in rounding up an expedition to send north. When a small group was in La Mesilla purchasing supplies they learned the Mexican Army was on the horizon. Hurrying to camp, they spread the alarm. It was one thing for Padre La Rue to leave his post without permission of church officials in Mexico City, but it was quite another not to deliver the Royal Fifth (or Quinta) of the gold for shipment to Spain.

Father La Rue immediately set about concealing all traces of the mine. Working day and night, knowing the soldiers were drawing ever closer, he had his little group labor to seal the entrance to the mine. When the soldiers finally arrived and demanded to know where the gold came from, which was used to purchase the supplies in La Mesilla, Padre La Rue refused to answer. He died under torture, as did many of his followers. The soldiers searched the entire area, but finding no clues, they returned to Mexico empty-handed.

Although the historical facts suggest LaRue was in the Organ Mountains between present-day Las Cruces and Alamogordo, his mining operation was deep in the San Andres Mountains north of Las Cruces. It was here, according to the legend, that the treasure was concealed.