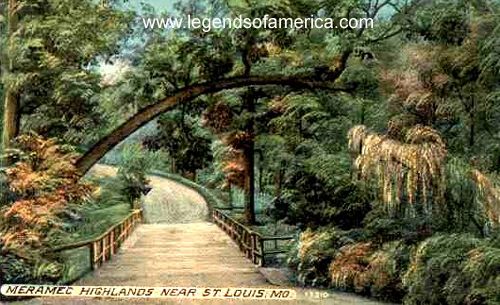 In the late 19th century, several popular summer resorts were founded southwest of St. Louis, Missouri on the Meramec River, including Meramec Highlands, Valley Park, Fenton, and Castle Park. As the Frisco Railroad trains started running on a regular basis to the Meramec Highlands and Valley Park train stations, Meramec River attractions became popular for wealthy St Louis families. Unfortunately, for the masses of St. Louisans, the cost of the train ride prohibited frequent visits for the common folk of St Louis.

The Meramec Highlands “Frisco” Railroad Station was constructed in 1891 by the Meramec Highlands Company, the developers of a summer getaway for wealthy Midwesterners. Located on the bluffs overlooking the Meramec River, two miles west of present-day Kirkwood, the station was built in the Romanesque Revival architecture. Once completed, it was deeded to St Louis and San Francisco Railroad for $1 in exchange for regularly scheduled service. 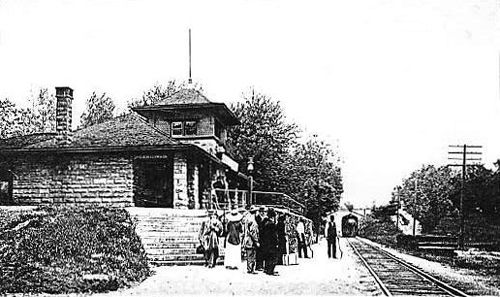 In nearby Valley Park, the Frisco Hotel was built in 1893 for the track crews who were pushing the railroad westward through Missouri. After the railroad was completed, the Frisco Railroad used the hotel as a layover for train crews as more wealthy St. Louis patrons began to enjoy the amenities on Valley Park’s section of the Meramec River. Valley Park began to boom with restaurants, grocery stores, and other amenities. At the turn of the century, as many as 88 trains a day stopped in Valley Park.

By 1894, the wealthy were well acquainted with the lower Meramec River when the Meramec Highlands Inn and recreation complex was opened.  Providing access to the river on a grander scale, the Meramec Highlands Inn provided its own depot, swimming beach, boathouse, rental cottages, a Pagoda dance pavilion, tennis courts, stables,  croquet courts, and a mineral water bathhouse. Providing an excellent view of the Meramec River Valley, the Inn itself offered 125 stately rooms with “sanitary plumbing” and electric lights which made the resort the crown jewel of the summer resorts of the area. Numerous indoor amenities included a bowling alley, billiards, and chess rooms, a barbershop, bakery, wine cellar, restaurants, banquet rooms, a stage for plays, and large verandas, where guests congregated to view the beautiful scenery. Many affluent St. Louisans would stay at the resort while still commuting to work on the Frisco Railroad. By the time the resort was in full operation, 12 trains a day stopped at the station. 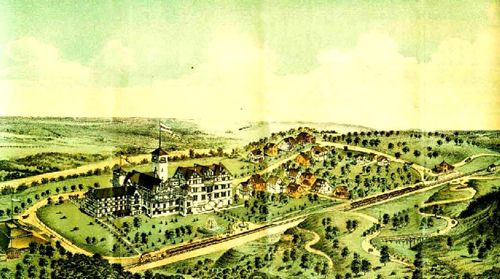 Depiction of Meramec Highlands during its heyday.

Meramec Highlands was not only built to serve the wealthy St. Louisans escaping the summer heat, but also in anticipation of the St Louis World’s Fair planned for 1904. Just an hour’s ride from downtown, on the Frisco Railroad, the resort anticipated numerous visitors during the coming years.

However, the inn’s success was not to last. In 1896, streetcars to the resorts began to operate, providing one-way passage for as low as five cents. This allowed the “common people” to flock to the resort areas and as a result, the wealthy clientele began to shy away from the crowds. The patronage of the Inn dropped every year from 1900 to 1903 so a concerted bid was made to increase patronage during the 1904 World’s Fair, via distribution of numerous brochures and heavy advertising.

During the World’s Fair season, the Highlands Inn was filled up, partially due to the fact that room rates had been lowered to $1.00 a night. Despite a surge in business during the 1904 Worlds Fair, the hotel closed the next summer. During the next few decades, more attempts to continue its operation were unsuccessful. In 1925 the hotel and its 15 cottages were sold to private individuals.  The Highlands Inn was destroyed by fire in 1926; however, 12 of the 15 cottages remain in Kirkwood, owned by private individuals as family homes in what is now the Meramec Highlands Historic District. 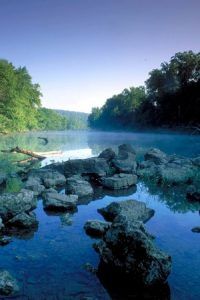 Though the wealthy shied away from Meramec Highlands in search of more secluded resorts, the masses began to arrive by the thousands during the early 20th century. Traveling on two electric lines and the Frisco Railroad, Sundays became so popular that the streetcar lines became hard-pressed to provide sufficient transportation for all who wished to board the cars.
Before long more hotels, lodges, and clubs offering games of chance sprang up along the banks of the river where popular beaches attracted numerous visitors wanting to escape the crowds and heat and humidity of St. Louis in the summer. By the 1920s the lower Meramec had become a recreational Mecca to the thousands of St Louis visitors. Canoes began to appear on the river in droves for fun seekers and anglers alike. Attending the popular Lincoln Beach near the old Highlands and other beaches near Valley Park, Castle Park, and Fenton, the tourists also enjoyed dancing upon open-air dance floors and partying at the numerous clubhouses that appeared along the river.

On many weekends as many as 10,000 people could be found near Lincoln Beach during its peak of popularity. At about the same time, the Frisco Hotel in Valley Park was turned into a commercial hotel for the many visitors in that area of the river.

During the great depression, the recreation areas along the Meramec became neglected, as abandoned beaches became overgrown, lodges stood empty, and clubhouses fell into disrepair. In 1925, the Frisco station at Meramec Highlands changed its name to Osage Hills and discontinued operations in 1932 soon also falling into bad shape.

After World War II, cars replaced trains and travelers began to seek out more distant areas such as Yellowstone, the Grand Canyon and the larger dammed lakes of southern Missouri. Attendance at Lincoln Beach and the remaining Meramec River resorts and clubs waned swiftly.

Over the years, Castlewood became a quiet place, part residential area and part hunting and fishing camp. Some clubhouses were renovated for year-round use, while others were demolished or left to decay. 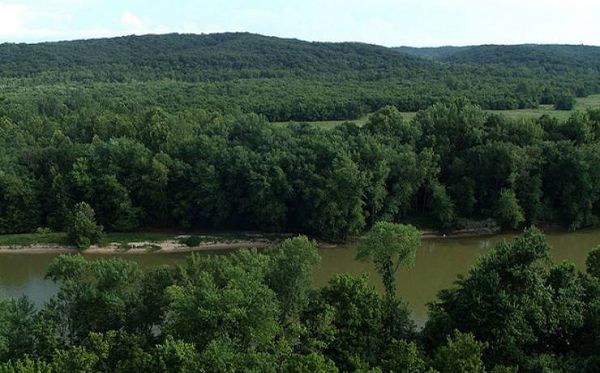 Today, Castlewood is a state park encompassing 1,779 acres along the banks of the Meramec River. Preserving the history of the former resort, the park incorporates much of the old resort area, including the grand staircase that once led tourists up to the large hotels and clubs. Although the hotels and clubs are gone, the staircase and the lure of the region remain.

Valley Park, well established with a glass factory and other industries thrived as a small community outside of St. Louis and the historic Frisco Hotel continues to stands. Today the building, located at 28 Front Street, houses the Whittle Shortline Railroad, a small, family-owned manufacturer of American style wooden railroad toys. Since 1999, the business has featured a retail store where numerous handmade trains are sold and railroad fans can watch as they are being built in the toy assembly area.

Kirkwood became a suburb of the greater metropolitan area where the site of the former Meramec Highlands river amusements are now located in today’s Greentree Park. Though swimming is no longer safe or allowed in this section of the river, a boat ramp is still available for anglers and boating enthusiasts. Thirteen of the original cottages continue to stand in the nearby residential area, along with the original general store, which is now also used as a private residence. The remainder of the land is now a new residential development where its centerpiece remains the 1895 historic Frisco Train Station. After sitting abandoned and deteriorating for years, the building, built of solid Missouri limestone, has been restored. At the time of this writing, it stands for sale as a residential home in the new development area.

All along the banks where these historic resorts once stood are numerous parks and hiking and biking trails. Local float liveries offer a variety of options to floaters including inner tubes, kayaks, canoes, Jon boats, and river rafts. Riverfront campgrounds and lodges offer everything from primitive camping, to horseback trail rides, to luxury cabins.