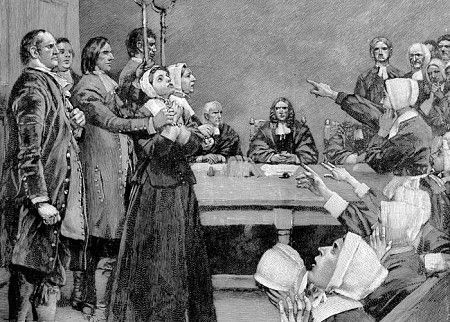 Seven years after the witch hunts in Connecticut began in 1647, Lydia Gilbert was charged with witchcraft in Windsor, Connecticut, in 1654.

Before this time, Lydia and her husband, Thomas Gilbert, were boarding with a single man named Henry Stiles in Windsor, who was about 52 years old. Henry was also thought to have been Thomas’ employer, and Lydia kept house for Henry.

On November 3, 1651, Henry and a neighbor named Thomas Allyn participated in training exercises by a group of local militiamen. During the exercises, Allyn’s gun accidentally discharged, hitting Henry Stiles and killing him. 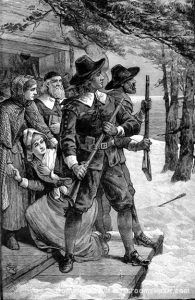 An inquest was immediately held, and Allyn was indicted in December. At trial, he confessed and was found guilty of “homicide by misadventure” and was fined 20 pounds for his “sinful neglect and careless carriage.” He was “bound to his good behavior” for 12 months and ordered no to bear arms for that time frame. After his father paid his fine, Thomas was released into his custody.

Though it would seem that this would be the end of the story, it wasn’t. Apparently, Stiles’ death remained a hot topic of conversation as the community’s people tried to understand how such an accident could have occurred.

In the Puritan settlements of the New World, the colonists experienced a great deal of hardship and constantly looked for something or someone to blame. Witchcraft was often the scapegoat as the people believed that the Devil recruited witches to cause harm to their communities.

As the topic of Stiles’ death continued, rumors, assumptions, and ultimately, accusations were made. Lydia Gilbert fit the “mold” of those most often accused. She was middle-aged and not among the “elite” of society.

More than two years later, records of the Particular Court in New Haven, Connecticut, on March 24, 1654, show that an attempt was made to blame for the accident on witchcraft. Her neighbors accused her of practicing witchcraft, claiming that her abilities had enabled her to make the musket of Thomas Allyn discharge. 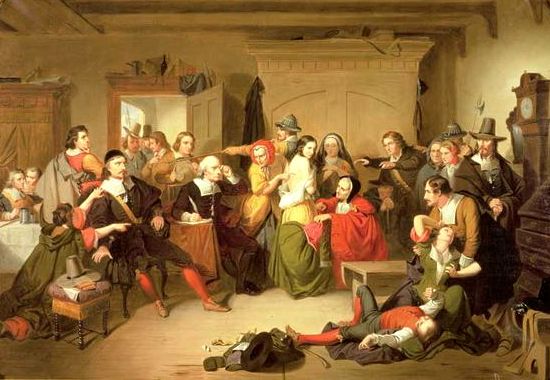 On November 28, 1654, Lydia Gilbert was indicted and tried for “procuring the death of Henry Stiles.” The charges read:

“Thou are here indicted by that name of Lydia Gilbert that not having a fear of God before thy Eyes thou hast of late years or still dust give Entertainment of Satan the great Enemy of God and mankind and by his help hast killed the Body of Henry Styles, besides other witchcrafts, for which according to the law of God and the Established Law of this commonwealth thou Deserves to Die.”

A panel of jurors was collected, six of whom were residents of Windsor, and were well aware that Thomas Allyn had been convicted of killing Stiles.

After entering an indictment, the same jury heard the evidence and brought forth the verdict, which read:

“Ye party is found guilty of witchcraft by the jury.”

Though her fate is not written in any known records, most historians believe that she was hanged at Hartford, Connecticut. Some family stories, handed down through the generations, say that Lydia was able to escape. Still, the fact that Thomas Gilbert left the community shortly after her trial and quickly remarried lends credibility to the fact that she was hanged.

She was the fifth victim of this dreadful practice in colonial Connecticut history.

Lydia’s ancestry lines are still in debate today, and there are no records that have been found of who her parents were when or where she was born. According to descendant Kristin Ludwig, Elizabeth Lydia Bennett was born in 1586 in England. She was married to Thomas Gilbert, Sr. who was previously married. Somewhere along the line, he made his way to America and then to Windsor, Connecticut, where he bought five acres from Francis Stiles, Henry Stiles’ father. It is unknown what happened to his first wife, but somewhere along the line, he married Lydia.

Thomas’ brother, Jonathan Gilbert, was working as a Marshal of the Colony at Lydia’s trial. 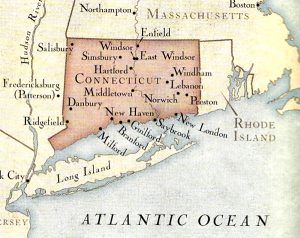