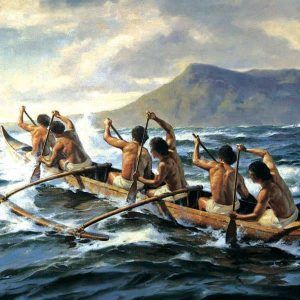 Long before the white settlers rushed into El Dorado County during California’s Gold Rush days, natives of the Hawaiian Islands had arrived here in the early 1800s. These islanders, known as Kanaka, first worked the ships engaged in the hide and tallow trade before forming permanent settlements at several places in the Golden State. In El Dorado County, they lived in Kenao Village, named for their chief, and farmed the surrounding land.

The Hawaiians were some of the first settlers to establish a town in El Dorado County, farming the land and living quietly before gold was discovered. However, when gold was discovered, they too joined the many miners flooding the area and selling their produce to miners in Coloma. Before long, the miners began to call the village Kanaka Town.

One of the Islanders named “Kanaka Jack” soon appeared in the village, working a mine along Irish Creek, not far from town. Known to have brought large amounts of gold out of what became known as the Kanaka Jack Mine, he never told anyone of its exact location. In 1912, the Hawaiian miner died at the county hospital.

Today treasure hunters continue to search for the lost Kanaka Mine in El Dorado County.