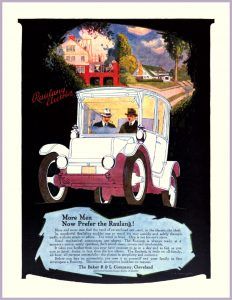 In the world of marketing, advertising, and sales, substance often takes a back seat to perception. Catchphrases, slogans, and jingles translate into revenue; even if the product being sold is little different from that offered by a competitor, or the product quality is a bit questionable.

From its inception the development of automotive advertisement was a sorcerer’s blend of alchemy, P.T. Barnum styled word pictures and a hint of psychology. When it comes to the selling of the sizzle rather than the steak, the wordsmiths that worked for automotive marketing companies and advertisers were, and are, true artists.

However, the value in the automotive advertisement is not always measured in dollars and sense. As vintage promotional material is a window into a lost world, it transcends its original purpose and serves as an invaluable time capsule long after the company being promoted has been relegated to the ash heap of history.

As an example, consider some of the earliest pieces of automobile promotional material produced in a time when there wasn’t even agreement on what to call the contrivance.

The Porter Stanhope of 1900 was “The Only Perfect Automobile.” Advertisement for the 1901 Oldsmobile proclaimed that “electric vehicles or vapor vehicles were the result of 15 years experience.”

The Porter was “safe, simple, and durable.” “It is free from all complications in its mechanism so that an engineer is not necessary in its use.”

The Oldsmobile featured “pneumatic cushion tires” and “…carriage body free of machinery of any kind.” “It automatically regulates its speed; changes its spark for a high or low speed…”

The 1901 Phelps Tractor was simply a steam-powered tricycle with reins stretching back almost three feet to the rear. “By attaching the Phelps steam-powered tractor to a buggy, a surrey, a light spring wagon, or a cart, you transform horse-drawn equipment into an automotive contrivance.”

Pulling back on the reins cut the speed, stopped the unit, and also served as the means for reversing. There were no brakes!

The Friedman Automobile Company of Chicago, Illinois proclaimed, “Try it and you will buy it.” After all, “every unit is guaranteed to climb any grade up to 30% with an engine produces six horse-power.”

Rather than trying to compete with other manufactures with claims of mechanical prowess, the California Automobile Company of San Francisco, California tried a different approach in 1902. “Our factory, where your machine is made, is at your disposal for any repairs or breakage. These can be attended to without the troublesome delays necessarily encountered when dealing with Eastern firms.”

During the infancy of the industry, gasoline or kerosene engines were, for the most part, untested technologies fraught with issues. So, manufacturers often hedged their bet. The Jackson Automobile Company of Jackson, Michigan offered a six-horse-power “gasoline road car” and the steam-powered Jaxon because “steam is reliable and easily understood.”

In those early days, the marketing of simplicity often trumped mechanical advancement or advanced technology. The 1903 Fordmobile, “The Boss of the Road” produced by Ford Motor Company was so simple that “…a boy of 15 can run it.” The Wannaker was a car “…so simple in its operation that a child or woman could drive it.”

These vintage promotional pieces do more than mirror the evolution of automotive technology and related advertisement. They often also present a snapshot of the motoring experience.

The Pope Hartford of 1905 was, “An exceptional hill climber…” The Ford Model F manufactured in the same year “…seats five people and climbs hills on high speed.”

The Allen is “The King of Hill Climbers.” For the Jackson, there is “No Hill to Steep, No Sand to Deep.”

The Gale for 1907 was the car that “climbs hills like a squirrel and eats up the road like an express train.” However, if speed was secondary to the need of a vehicle more suitable to rural driving, the prospective buyer might consider a Model produced by the Model Automobile Company of Peru, Indiana since “hills and sand become level land” with one of these cars.

Even though automotive technology made quantum leaps in the first years of the 20th century, and automotive advertisement rode on its coattails, much of the promotional material from this period indicates there was still a great deal of confusion about what exactly an automobile was, or what its role in society was.

The Northern was “Silent and Dustless.” The Adams-Farwell offered motorists the advantages of a “revolving air-cooled engine” while the Lambert offered the simplicity of “the friction drive car.”

The 1908 Studebaker Suburban easily converted into a “smart runabout” or a “combination passenger and baggage car” or “a light four-passenger car.” 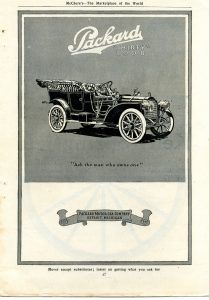 Packard used the slogan “Ask The Man Who Owns One…” in this 1908 Advertisement. Courtesy Mike Haney on flickr

Soon slogans and jingles were replacing wordy or heavily technical promotional pieces. These early promotional pieces also offer a glimpse in the formative years of the auto industry, as well as into the dawning of the modern era of advertisement and marketing.

The Knox of 1904 was “The car that obviates the tow.” In the same year promotion for Cadillac proclaimed that it was “The automobile all makes hope someday to equal.”

“Equal to the $2500 kind but at one third the price” topped promotions for the 1904 Rambler produced by the Thomas B. Jeffery & Company of Kenosha, Wisconsin. The 1903 Roadster produced by Flint Automobile Company of Flint, Michigan proclaimed that “Every Part is the Best, Every Part is Accessible.” This was also a car with a “muffler that muffles.”

The American produced in Indianapolis, Indiana was “A Car for the Discriminating Few.” The Driggs was “Built with the precision of ordnance.” The Beggs was, “Made a little better than seems necessary.”

The Martin was “the little brother of the aeroplane” and the Moore was, “The World’s Biggest Little Automobile.”

By 1910, it was quite apparent that the automobile was a permanent fixture in American society. It was also obvious that for hundred of manufactures to compete for their share of a very limited market, the development of advertisement and promotion would need to become as important as producing an automobile that reflected the latest in cutting edge technologies.

It was the dawn of a new era. 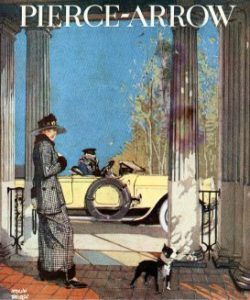 1919 US advertisement in “Life” magazine for Pierce-Arrow Automobiles

Most automotive advertisements and promotional materials produced during the first decade of the 20th century mirrored the overall confusion about what an automobile was, what its purpose was, and what its future was. With the exception of Cadwallader Kelsey’s innovative filmed commercials shown in nickelodeon theaters, and catchy tunes, most of this material was also word-heavy, colorless, and Victorian in nature.

Some companies even avoided advertisement in any form. After all, as Edward E. Goff said in an 1897 edition of The Motorcycle, “…the manufacturer of the motorcycle is a position to take advantage of more free advertising than any other industry.”

By 1908, Calkins & Holden had a well-established track record for creating profitable advertising campaigns for their clients. The following year the company turned its attention toward the promotion of automobiles; specifically, the luxurious automobiles produced by Pierce-Arrow, their newest client.

Calkins & Holden didn’t break the rules of automobile promotion, they wrote the rule book. In the process, they set the standard impossibly high, transformed Pierce-Arrow into America’s preeminent luxury car manufacturer, and launched an industry.

Their advertising campaign for this automobile manufacturer commenced with the hiring of the world’s finest illustrators, many of whom were also acclaimed artists. As a result, many of the promotional pieces produced by Calkins & Holden for Pierce-Arrow before 1920 are now considered fine art.

The list of illustrators hired to develop Pierce-Arrow promotional material reads like a Who’s Who of the art world in the early 20th century.

Among them were Edward Borein, a literal painter whose specialty was Remington-type western life scenes, and Ludwig Hohlwien, an internationally acclaimed German poster painter. Additional artists in the employ of Calkins & Holden during this period include Newell Convers Wyeth, a mural painter and illustrator of books penned by Robert Louis Stevenson, Louis Fancher, and John E. Sheridan, noted for his cover creations for Ladies Home Journal, Collier’s, and Saturday Evening Post.

Initially, hiring such esteemed talent for the creation of automotive advertisements was not an easy task. The creation and development of advertising were deemed to be on a level with snake oil salesman and automobile advertisement was the crassest of all.

In general, respectable illustrators and artists felt that such work was demeaning. So, the agency’s first task was to sell artists on the merits of being linked with Pierce-Arrow, and by association, with the rich and famous that purchased the companies automobiles. 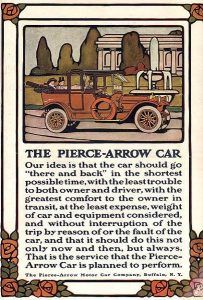 In addition, the artists associated with Pierce-Arrow through the agency were often treated as royalty. A story related by Adolph Treidler, an artist employed by the agency during this period, illustrates this and the fact that Pierce-Arrow was not your average automobile manufacturer.

“I don’t think anyone anywhere ever had the freedom that the artists for Pierce-Arrow had,” Treidler said. “They laid down no rules whatsoever, never told me to do this or that. Every year, about the time the new cars were to be introduced, the company sales manager, I remember his name as Hawley, would drive down from Buffalo (company headquarters) in one of the new cars and we’d take off for a pleasure trip, to New England usually, and simply have a good time.”

“I’d get to know the car and get some ideas, take some pictures on a cheap little box camera I’d take along. Then I’d be dropped off back in New York. And I was on my own, completely.”

Even though Calkins & Holden’s promotions for Pierce-Arrow were revolutionary, they were also dated and archaic. The product they marketed was better suited for genteel Edwardian society, not a society where mass production enabled the lowly common man to share in the luxury of owning an automobile.

The Pierce-Arrow and the advertisement developed to promote it reflected the world of the super-rich and royalty. Snob appeal was a key component in the selling of a hand-crafted automobile that in its base form sold for more than five times the price of a new Ford, and several times the price of a Cadillac even though its mechanical components were hopelessly outdated.

Still, Calkins & Holden’s bold use of color and text to portray the automobile as more than mere transportation opened the doors on the Madison Avenue advertising of the 20th century. The agency also served as a training center for a generation of advertisers. 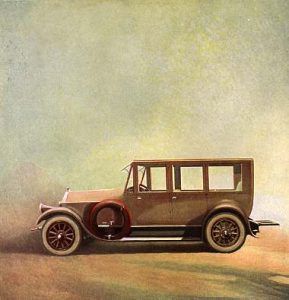 Edward Wilson would later develop advertising materials for Coral Gables Coloration, La Salle, and Victrola. Walter Teague developed materials to promote the now legendary Marmon Eight, and The Brownie Camera. He also became a leading industrial designer responsible for some of the most stunning automotive designs of the forties and fifties.

Guernsey Moore became the art editor at the Saturday Evening Post. Myron Perley later contributed his artistic styling to the promotion of Hupmobile.

Cadwallader Kelsey gave us the automobile commercial. Calkins & Holden gave us automobile advertisements filled with vibrancy and color. They also unleashed a generation of dreamers that did almost as much to put America behind the wheel as Henry Ford did with the Model T by making the sizzle as appealing as the steak itself.