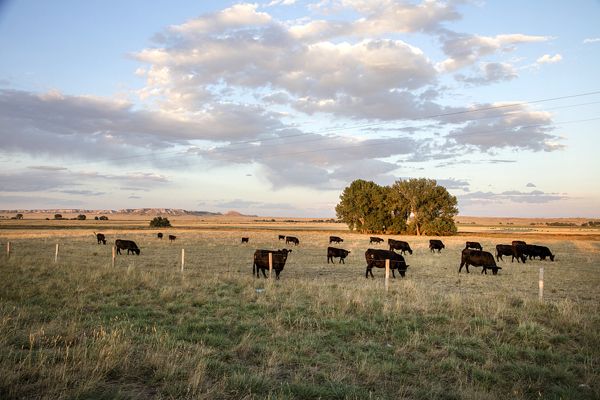 Jay Em, Wyoming, began along a watering hole on the old Texas Trail that ran north-south through Goshen County. The land around the townsite was originally claimed by James Moore, a former Pony Express rider and rancher in the 1860s. By 1869, Moore had the second-largest cattle ranch in Wyoming Territory under the brand “J Rolling M.” A small stream on his land was named Jay Em Creek. Moore died in 1873, but his brand continued to live on.

On February 13, 1899, a post office was established on Jay Em Creek, a short distance from the future site of the present town of Jay Em. The postmaster was William “Uncle Jack” Hargraves, and the post office went by the name of Hargraves. Uncle Jack was an unconventional person with decided opinions of his own.

The story goes that there came a time when the U.S. Postal Inspector called on Uncle Jack, and their opinions clashed strongly. After that, Uncle Jack informed the inspector that he could pack up his post office and get out, which is exactly what the gentleman did. Since the materials and supplies of the post office were all contained in a large wooden box, packing up and getting out was not a very difficult task. This left the ranchers and settlers with no post office nearer than Rawhide Buttes Station or Fort Laramie for the next ten years. 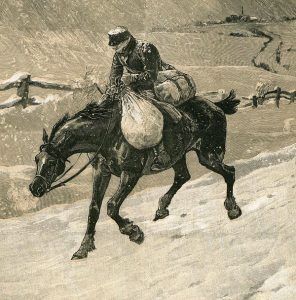 In 1905, Silas Harris and his three sons, Art, Lake, and Frank, from Wisconsin, took over the Jay Em Cattle Company. Three years later, in 1908, Silas Harris sent a request to Washington, D.C. to have a post office in the area again. They replied that the post office would be established if the family would bring the mail from the Rawhide Buttes Station to Jay Em Ranch every other day for 90 days. Silas’ son, Lake Harris, made the 20-mile round trip for the three months it was required.

Upon receiving approval for the post office, the equipment was set up in a bunkhouse at the ranch. On February 10, 1909, Elizabeth Thornton, a friend of the Harris family, was appointed postmistress. In addition to the post office, the Harris family maintained a small general store on the Jay Em Ranch. The “Silas Harris Company Store” sold general merchandise to area farmers and ranchers, provided rudimentary banking services, bought farm produce, and became a gathering place for homesteaders and cowboys alike.

In 1912, 21-year-old Lake C. Harris filed for land under the Homestead Act on an empty stretch of prairie along Rawhide Creek. He first built his own house and then operated a feed store in the ranch bunkhouse, which soon became a general store. When he was appointed postmaster in 1914, the post office was moved to his store.

A weekly newspaper called the Jay Em Sentinel, and Fort Laramie News ran from 1917 to 1921. The Harris general store was moved from the ranch to the new townsite in 1918. Other businesses were also established, including a lumber yard and a blacksmith shop. 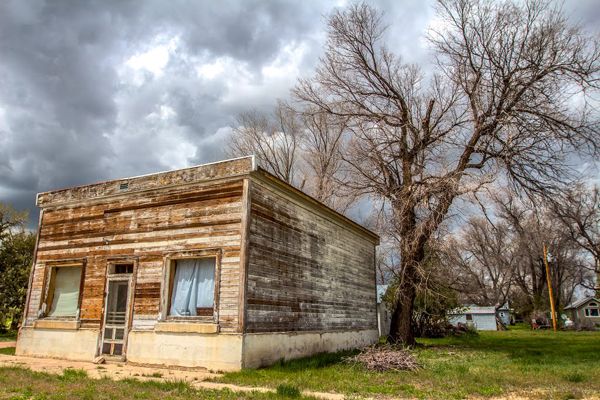 Through the 1920s and 1930s, the town became a regional center for commerce in northern Goshen County. Afterward, however, it began to decline as the automobile made it easier for residents to travel to larger towns like Lusk, Lingle, and Torrington.

In 1931, Lake Harris was again appointed postmaster, a position he held until 1959 when he retired.

The Farmer’s State Bank sold out in 1945, and Shoults Garage closed the same year. However, the following year, the garage would reopen as “Wolfes Repair,” a business that lasted until 1960. 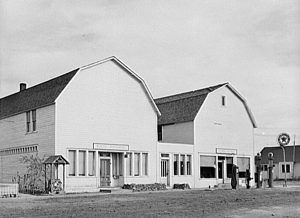 The general store lasted until the late 1970s.

Lake Harris died in 1983 at the age of 96. At about the same time, most of the remaining residents gradually moved to more modern accommodations scattered around the edges of town, eventually leaving the old, historic center of town abandoned for the most part.

Never incorporated, the streets of Jay Em were never paved or graveled, there were never sidewalks, curbs, or gutters, and there was no municipal organization or community center. At its largest, Jay Em hosted more than 200 residents.

The Jay Em Historic District was listed on the National Register of Historic Places in 1984. 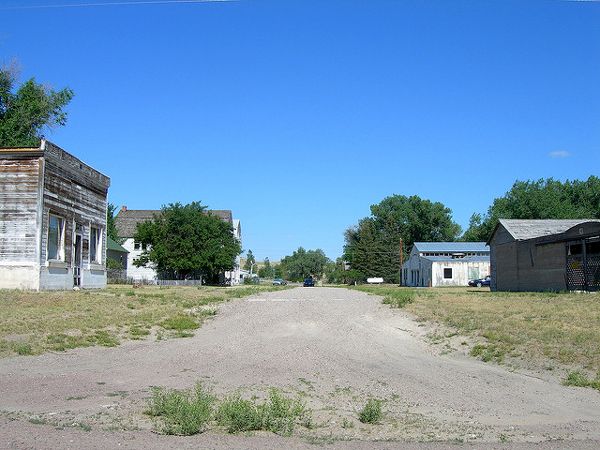 The historic district is a tightly knit commercial center with all buildings within a block of each other. The buildings, constructed with the materials at hand, display a consistent architectural design. The buildings are wood frame, with ship-lap siding and some concrete walls and foundations. They have simple, functional doors, windows, and gabled roofs, and they are small, one and two stories, constructed to serve the needs at hand.

A few modern structures are scattered about the fringes, housing the few remaining residents.

The district, looking much as it did in the 1910s and 1920s, remains in the hands of Lake Harris’ heirs.

The buildings of the historic district include: 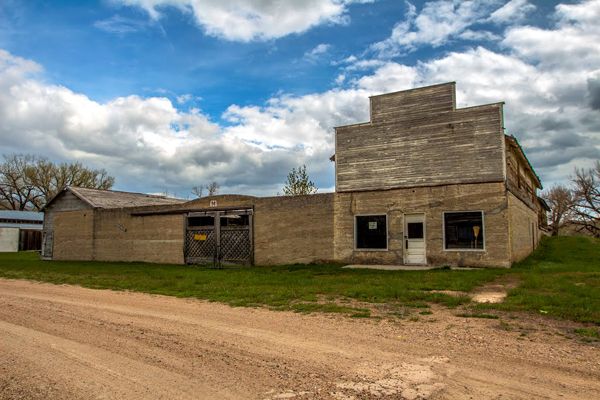 Lumber Yard – This is an unusual commercial structure with a two-and-a-half-story false front at the east end, an arched connecting wall, and a gabled warehouse that creates a courtyard in between, which has two shed-type outbuildings. This building was first called Jay Em Store and then General Store. In 1917 it housed the grocery, hardware, drugstore, livestock feed, and lumberyard.

Stone Company – A two-story gabled brick structure with two large shed roof wings flanking the central structure. The concrete wings are one story and may have functioned as living quarters on the east and storage on the west. Lloyd Damrow and Oscar Bradbury opened a business called Jay Em Onyx & Gem Co. Through the years, it was also known as the Wy. Marble & Stone Inc., and Jay Em Stone Shop. They made headstones, fireplace mantels, tabletops, paperweights, salt & pepper shakers, ashtrays, candlestick holders, and jewelry.

Bank – This one-story wood frame, ship-lap commercial building has a concrete foundation and flat roof. Two oversized fixed windows are flanking the central front door with concrete sills and plain surrounds. There is a small one-story frame garage with a gabled tin roof and original double doors in back. Farmers State Bank opened for business in 1920. In 1933, after a month-long run on American banks, President Franklin Roosevelt temporarily shut down banks on March 6th and they weren’t allowed to reopen until March 13. The Farmers State Bank in Jay Em did not receive word of this, so it stayed open. The bank was robbed in 1935. The bank was sold to the 1st National Bank of Torrington in 1945, but it never reopened. At one point, the post office was located in the front corner of the Bank building.

House – This is a very simple one-story frame house on a concrete block foundation.

Restaurant-Feed Store-Post Office-General Store – This multi-purpose building consists of two 2½ story gambrel-roofed frame buildings connected by a single-story flat-roofed link. The left side of the structure, built in 1935, replaced the grocery store that was originally in Lake’s home. People were allowed to charge their groceries and dry goods. The hall above this store was used for Sunday school, church club meetings, and as apartments. The right side of the building was called J.M. Hardware. It also had a soda fountain and gas pumps. Town meetings, socials, and even rifle practices were held in the hall above the store. Located between the grocery and hardware store, was a cream station that, at one time, shipped out more cream than any other station in Wyoming. 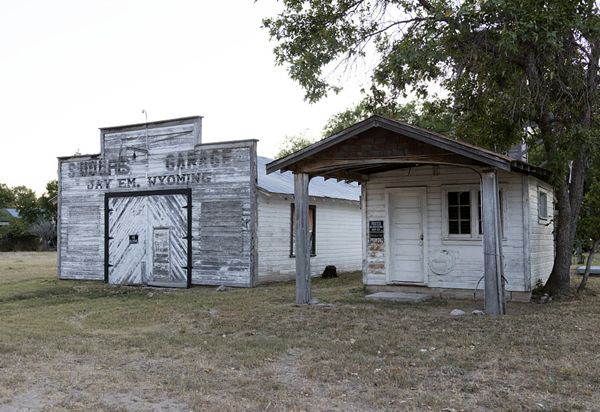 Repair Garage – This is a one-story wood-frame building with the front gable overhanging to create a sheltered drive-through. James Shoults was the first proprietor, from 1928 to 1945. 1928–1945, calling it “Shoults Garage.” From 1946–1960 it ran as “Wolfes Repair.” A blacksmiths shop was located in the rear.

Gas Station – This is a small one-story gabled, wood frame, and ship-lap structure. The gable end is extended to create a drive-through carport

Lake Harris House – An irregularly massed one and two-story wood-frame house. There are three interior brick chimneys and two porches. The house was built over the original dugout, with an “owl wall” still in evidence.

Today Jay Em is called home to about 15 people. A nondenominational church and a post office remain open.