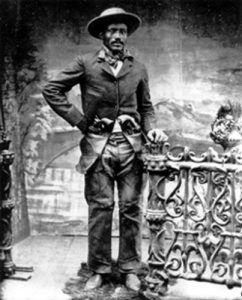 Isom Dart, also known as Ned Huddleston, was a prospector, cowboy, and outlaw in the American West.

Born into slavery in Arkansas in 1849, Ned helped Confederate soldiers steal food and goods during the Civil War. After he was freed by the Emancipation Proclamation, he drifted into Texas and Mexico, working as a rodeo clown. However, he soon turned to cattle rustling in Mexico, moving the herds across the boundary and selling them in Texas. Though he tried to go straight many times in his life, he never quite succeeded, always returning to rustling.

Over the years he also worked as a prospector, broke broncos, and rode with the Gault Gang. In 1875 he moved to northwest Colorado where he was involved in gambling and a number of fights. However, he tried to go straight again when he bought a ranch near Brown’s Hole and changed his name to Isom Dart. In 1899, during the Brown’s Park range war between the Two-Bar Ranch Cattle Company and area ranchers, he took up with Ann Bassett, a ranch owner and cattle rustler herself. Soon the Two-Bar Ranch brought in Range Detective Tom Horn to suppress the cattle rustling and threaten the smaller ranches. In July, Dart received a note specifying that he and certain ranchers must leave the area. However, Dart chose to ignore the demand and on the morning of October 3rd, Tom Horn shot him dead.