From Spencer, Missouri, Route 66 makes a straight line westward for 31 miles along Highway 96, before it begins to turn southwest toward Carthage, or travelers can choose to visit the site of Red Oak II to the north, a living ghost town.

Along the way, there are several old towns including Heatonville, Albatross, Phelps, Rescue, Plew, Avilla, Forrest Mills, and Maxville, of which, some have very small agricultural populations, others sport little more than crumbling buildings, and a few have no more than a foundation to suggest that anyone ever lived there. 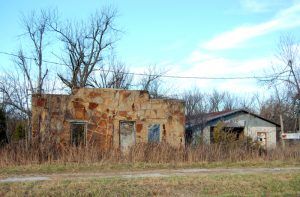 Jim Collins’ Garage was built about two miles east of Heatonville, Missouri on the north side of Route 66. It is gone today. Photo by Kathy Weiser-Alexander.

Heatonville, Missouri was a small unincorporated community located on Route 66 in Lawrence County.

The first settler was Daniel Heaton, who platted the town in 1868. The community was first called Heaton and within a year, it boasted about ten homes, a store, and a blacksmith shop. In 1872, a post office was established and the town slowly continued to grow. By 1881, it had about 50 people, but that very same year, the post office was discontinued as there was no one to act as postmaster. It would be another seven years before it would reopen 1888. At that time, the town’s name was changed to Heatonville.

From the 1890s until the early 1920s, the Williamson apple orchard was the area’s most profitable industry, so much so, that a railroad spur was added specifically to load and ship the fruit. 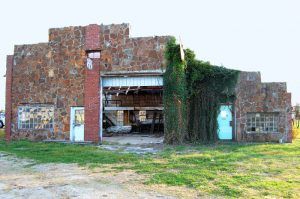 The D.L. Morris Garage on the south side of Route 66 is one of the only signs that Heatonville, Missouri ever existed. Photo by Kathy Weiser-Alexander.

When Route 66 was established in 1926, several businesses were opened to accommodate the travelers, including a gas station, tourist court, and two garages. One of these was Jim Collins’ Garage, built of slab rocks about two miles east of Heatonville near the intersection with County Road M. Collins ran the garage for many years before it became Law’s Auto Salvage. For years the deteriorating garage sat along the north side of the highway, along with a few other buildings. However, in 2018, the old garage was gone, replaced with a red business building.

Another garage was built on Route 66  in Heatonville in 1936 by D.L. Morris. The building was constructed of rubble fieldstone on the site of the old post office. The garage continued in business until about 1970 and later housed an antique shop. Vacant and deteriorating today, it continues to stand on the south side of the road.

Today it is difficult to even know where Heatonville once stood as there are no more signs indicating a town and the area is filled with fuel storage tanks, feed companies, and homes. Look for the old Morris Garage on the south side of the road at the intersection of MO-96 at County Road 1142. Just about two miles to the west, Route 66 travelers will arrive in the small community of Albatross. 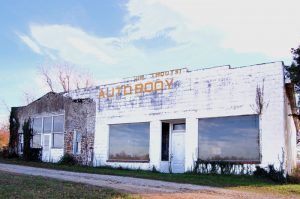 Prior to Route 66 coming through the area, this town did not exist. It was only after the Mother Road came through that this small crossroads community began in 1926 as a cluster of three buildings — a bus depot, a filling station, and lunchroom. It took its name from Albatross Bus Line company. It soon grew into a thriving small town as a result of the traffic generated by the highway. Well into the 1950s, the traffic was steady enough to support six gas stations along a one-mile stretch of road.

Once there were several businesses that catered to Route 66 traffic, but the only one that still stands today is the old Jim Moot’s Auto Body Shop and Inspection Station on the south side of the highway. The east portion of the building was built of stone in 1930. Later, an addition of concrete blocks was added on the west side, which more than doubled the available space. The building is located on the south side of Highway 96, less than 1/2 mile east of the intersection with Hwy. 39.

Albatross continues to display a number of homes, buildings, a couple of businesses and is still marked as a town with road signs.

The road continues westward to the small town of Phelps, Missouri, less than four miles to the west. 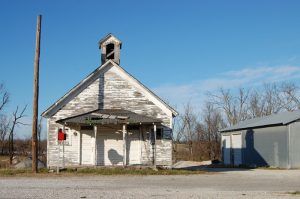 The 1889 Phelps, Missouri schoolhouse still stands on Route 66. It has been restored today. Photo by Kathy Weiser-Alexander.

Phelps is a small town that dates back to the 1830s when it was settled along the Carthage-Springfield Road. The first schoolhouse was built of logs in the early 1850s about a mile north of the community, When a post office opened in 1854, it was called Stalls Creek. In 1857, the name was changed to Phelps, after William Wallace Phelps, a state legislator. By the time of the Civil War, Phelps was a flourishing community, however, during the 1870s a devastating fire burned everything on the south side of the road to the ground. Recovery from this disaster was slow, particularly when the St. Louis & San Francisco Railway was routed through nearby Miller, causing some businesses and residents to move to the booming new railroad town.

However, in 1882, the town still boasted a population of about 80 people, a school, several churches, a general merchandise store, a drug store, a wagon maker, blacksmith, and a doctor. A new one-room school was built along the main road through town 1889. 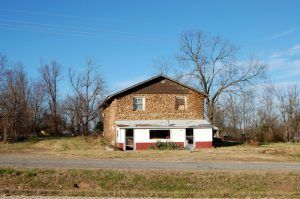 The old Henson Hotel in Phelps, Missouri. The front addition to the building has been removed today. Photo by Kathy Weiser-Alexander.

But the town didn’t continue to grow and in 1922, its post office closed.

A large stone structure was built by John and Belva Henson in anticipation of the coming highway traffic along the new Route 66. This stone building, located on the north side of the highway was among the first of about four buildings constructed in Phelps around 1925. Called the Henson Hotel, the two-story had 14 rooms available for lodging. The ground floor also housed a store, restaurant, and barbershop. The Hensons ran the business for over 20 years. Afterward, it became a private residence and continues to stand today at the northwest corner of Highway 96 and County Road UU. The building sits back from the road at the edge of the old 66 roadbed.

Bill’s Station, originally a one-room filling station was built by Bill Tiller in about 1926. Later it was expanded with a small addition in the back. A two-pump concrete island sat directly in front of the station and its awning was adorned with a metal sign reading “Bill’s Station” and “Double Cola.” After the station closed it sat vacant and deteriorating for years until it finally fell in a pile of ruins. It was a rare unaltered example of early roadside construction when a filling station was designed strictly for pumping gas. It stood at the northeast corner of Highway 96 and County Road UU. 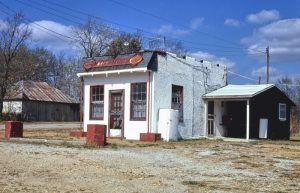 Bill’s Station in Phelps Missouri in 1979 by John Margolies. 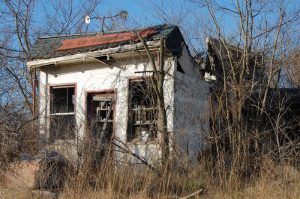 Bill’s Station in Phelps, Missouri in 2009, by Kathy Weiser-Alexander.

In 1952 the Phelps School District was consolidated into the nearby Miller School District, and the old 1889 one-room school was closed. Afterward, the building was used as a polling place, a meeting room for the local 4-H Club, and as a community center where the public held potluck suppers. However, the building fell into disuse sometime during the 1980s and in the next years was left to deteriorate. Recently, however, the old school has been fully restored and sits on the north side of Highway 96.

In 1955, Route 66 was widened through Phelps and all of the businesses and homes on the south side of the road were razed including a Texaco Service station and cafe.

Today, Phelps is still called home to several people and the town is dotted with homes and just a few businesses.

Route 66 continues is straight-line path westward for about four miles to Rescue, Missouri.

The small community of Rescue got its start in the late 1890s and a post office was established in 1897. However, the town didn’t grow much and the post office closed in 1904.

In 1926, Route 66 came through town along what was once the old Ozark Trail and a gas station and two motor courts soon sprouted up.

The area soon became a haven for lodging facilities including Reed’s Cabins, which included three freestanding cabins and a restaurant built of rubble stone in 1926. Built by the Rogers family, the site on the north side of the highway overlooked the road from a deep, sloped lot on the north side of the highway. This site is privately owned today and the former restaurant has been significantly altered over time to serve as a residence. Two of the original cabins continue to stand. The site is located on the North Side of 96 Highway just east of County Road 1040. 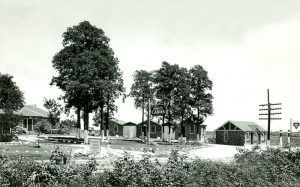 Reed’s Cabins on Route 66 in Rescue, Missouri during its heydays. 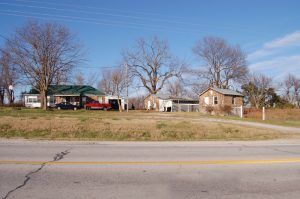 Reed’s Cabins on Route 66 in Rescue, Missouri is now a private residence, photo by Kathy Weiser-Alexander. 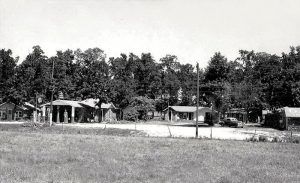 Shadyside Camp in Rescue, Missouri during its heydays.

In 1927, L.F. Arthur built Shadyside Camp on Route 66 on the west side of town. The site originally included four cabins that were constructed of local rubble stone and was located in the cooling shade of a thick grove of oak trees, hence, the name. Arthur initially charged $1.00 to $1.50 per night and guests had private cooking facilities and access to community toilets and showers. Electrified trailer space was also available for 50¢, A few years later, a gas station with a cafe and a store was built in front of the cabins along the highway. In about 1930 a row of three large cottages were added to the complex so more people could be accommodated. Over the years, the tourist court not only served passing motorists, but it became a popular local gathering place. Until the late 1980s, the store was still in operation. It has since been converted to a private residence. The privately-owned site still stands today and the cabins can still be spied in the background. It is located just west of County Highway 1032/Lawrence Street on the north side of the highway.

The town of Rescue continued to have a school until 2003 when the Miller R-II School District decided to close what was by then named “Miller West Elementary” due to declining enrollment.

Route 66 continues westward for just 3.5 miles before it reaches the old community of Plew. However, there is little here for travelers to know that it was ever a town, but it is still populated by several homes.

Avilla, which seems to be the “Capital” of this little section of the highway is just about 4.5 miles to the west. Between Plew and Avilla, once stood the 1935 Log City Camp on the south side of the highway. The complex also featured a Mobil Station, coffee shop and store. Right across the street was the 1928 Forest Park Camp, which included rock cabins, a cafe, a tavern, and a dancehall. During Route 66′ heydays, these two businesses were major rivals for decades.